I’ve just finished reading the new novel, Waiting for Sunrise, by William Boyd. The novel has something of a Tinker Tailor Soldier Spy vibe about it, and is certainly atmospheric of 1900s Vienna and WW1 London although it doesn’t come to an altogether satisfactory ending. Nonetheless, I digress – far from intending to proffer a review of the novel, I wanted to talk about an interesting theory espoused by therein.

The book’s central character, Lysander Rief, has a mental disorder which prevents him from climaxing during sex. At the story’s beginning, we find Lysander in Vienna, seeking the help of an eminent British psychiatrist, Dr Bensimon. Dr Bensimon isolates a particular incident in Lysander’s childhood which he believes is the cause of his sexual problems. He attempts (and is ultimately successful) to cure Lysander through the use of a psychoanalytical theory, Parallelism.

“Parallelism” worked approximately along the following lines. Reality was neutral, as he had explained – ‘gaunt’ was a word he used several times to describe it. This world, unperceived by our own senses, lay out there like a skeleton, impoverished and passionless. When we opened our eyes, when we smelled, heard, touched and tasted we added the flesh to these bones according to our natures and how well our imagination functioned. Thus the individual transforms ‘the world’ – a person’s mind weaves its own bright covering over neutral reality. This world is created by us as a ‘fiction’, it is ours alone and is unique and unshareable…

‘Pure common sense,’ Bensimon said. ‘You know how you feel when you wake up in a good mood. The first cup of coffee tastes extra delicious. You go out for a stroll – you notice colours, sounds, the effect of sunlight on an old brick wall. On the other hand, if you wake up gloomy and depressed, you have no appetite. Your cigarette tastes sour and burns your throat. In the streets the clanging of the trams irritates you, the passers-by are ugly and selfish. And so on.

I have no idea whether this theory of “Parallelism” exists beyond the pure fiction of Boyd’s imagination, and certainly a provisional search online seems to suggest that it does not. Nevertheless, the thought process described by the fictional character, Dr Bensimon, immediately resonated with me. Living in London is always a testing place, but there are some days when I love the place; other days when I just hate it. Just as Dr Bensimon describes, on a sunny day when I’m in a good mood, the people on the streets seem to exude a happy community spirit, the music from passing cars makes me feel like dancing, the polluted air smells urban and exciting. Conversely when I am tired or in a bad mood, I conclude that London is a living hell, that music from passing cars is deeply inconsiderate, the people on the streets are taking up the space on the pavement, they walk too slowly, they are ugly and annoying, and the London air is choking at my throat, begging me to escape to the countryside. It may all sound like common sense, but when you think about it, it’s interesting just how much our mood can affect our perception of the world around us. For this reason it is sensible, one might conclude, when making a snap judgment about anything, to step back and consider: was it really that bad or was I just in a bad mood?

May Blossom on the Roman Road, David Hockney (2009)

I decided to put the theory to the test. As regular readers will know, I was none too impressed with the Royal Academy’s latest Hockney blockbuster exhibit. I found the paintings to be mediocre, the colours alarmingly vivid, the content boring and very repetitive. Yet everywhere I go, there are shining reviews, Hockney’s story is played out all over TV documentaries, and English landscapes are the new vogue. So I decided to give the exhibition another chance.

Last time I went on a RA Friends’ preview day, it was pure and undiluted bedlam. This time, I booked my Friends’ slot at the earliest opportunity: 10am. Upon arriving a little early, I was dismayed to find queues, even for Friends, and even more dismayed when the doors opened at 10am and scores of advanced ticket holders poured into the exhibition before we Friends. However, when I finally got into the exhibition, I took the decision to skip the first 3 rooms – they are retrospective anyway. And thereafter, ahead of me, were the bulk of the Hockney galleries, completely free from crowds. It was bliss. Suddenly, seeing the canvases from afar, I could begin to appreciate “the bigger picture” which Hockney was trying to create. Without hundreds of packed in heads in front of me, being surrounded by these huge canvases depicting forests and Yorkshire landscapes was like treading a path through that magical forest in all seasons. Without the crowds, the vibrant colours were not gaudy but uplifting. When I could see the complete paintings unhindered, they did not appear repetitious, but necessary, subtle reworkings on a theme.

Hockney’s gallery of watercolours and oils on observation was now airy and bright, and the paintings perfectly reflected the seasonal bucolic treasures of the English countryside. In further galleries, Tunnels and Woldgate Woods, seasonal variations on the same view demonstrated how far a season can serve to differentiate the same spot. And these seasonal changes were given dynamic attention through Hockney’s use of 18 cameras to film the same spot from different angles, in different seasons. These films, being shown in the cinema which, upon this second visit, I was finally able to get into, were mesmeric, calming and beautiful as the cameras glided alongside trees and bushes and country roads in all seasons.

But best of all, in my renewed opinion, were the Hawthorn Blossom paintings (featured in this blog). Yes, the blossom looks like hairy caterpillers devouring a leafy bush, and the vast shadows look like the emergence of a sinister criminal, ready to pounce, but these images are also refreshingly original interpretations of what is really quite boring white blossom. They are colourful, without being shocking, very whimsical, and remind me a lot of the work of Philip Guston. On my first visit, I hardly noticed them. Now, refreshed and reinvigorated by this empty gallery, I loved them.

As if to confirm that this parallelism theory is true, when I attempted to revisit the initially skipped rooms at the end of the exhibition, hell had again descended. Like a tidal wave of sardine packed bodies, without a space between them, huge crowds had now filled the galleries of the Royal Academy and it was again impossible to see beyond the square centimetre of painted canvas directly in front of you. Absurd. I therefore felt very sorry for the vast spiralling queues of visitors snaking through the Royal Academy’s courtyard when we left the exhibition after this refreshingly empty experience. They, alas, will get nonesuch the experience, and if parallelism has it’s way, its highly likely that they won’t like the paintings nearly as much as a result. 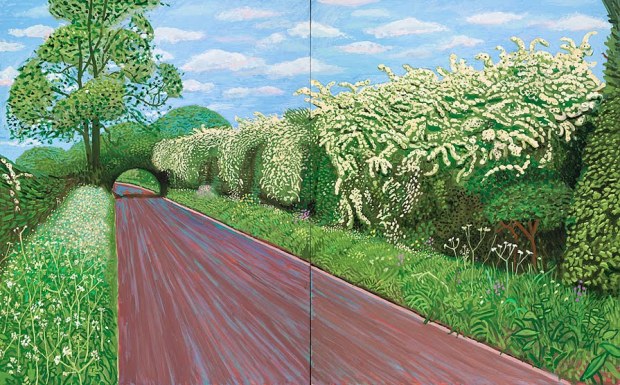