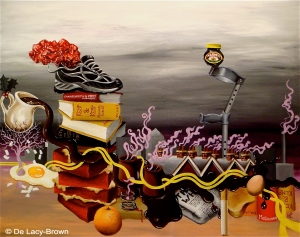 As the time for my new London solo art exhibition fast approaches, I am sharing some of the artworks which will be exhibited, most of them for the first ever time in a public gallery. Yesterday, I shared the first of my accident paintings, created in the immediate aftermath of my sudden accident in May 2009. Today I’m moving on to a work created towards the end of the series, at a time when the problems of my post-accident injuries moved from broken bones to deep internal infection. It was also the time when, after a year of healing and corrective surgery, I was told that the leg would have to be rebroken and reset, which in effect meant that I would be going back to square one all over again.

The resulting painting, La Marcha de Los Champiñones (March of the Mushrooms) was painted in my house in Spain (hence the Spanish title given to the work) immediately following my fifth operation – an emergency procedure to remove large scale infection which had built up in the leg. And no surprise there, since the amount of surgery I had endured up until this point was so extensive that my leg was literally riddled with holes. The leg had also healed with a fixed flexion deformity, which in effect meant that it had healed bent and would need to be rebroken.

All this I reflected visually with the use of mushrooms as an indication of the spread of infection, hence why, when the bent leg is cut open, a mushroom can be found at its centre. Meanwhile, a fragmented landscape, pocked with holes and broken pieces represents the fragility of my half-healed bones at that time, and the leg, which is also full of pins and nails, represents the amount of metal I had in my leg after various metal fixators had been used to piece it back together. Meanwhile, the use of road traffic symbols including ribbon and roadwork signs, as well as ladders, demonstrates that the leg was, at this stage, far from repaired and still a work in progress. It also reflects the accident which occurred by a road side.

It’s a painting full of some of the cynicism and frustration I was feeling at the time, but by this stage, my accident paintings had become more visually playful as I had accepted my fate and focused my energies on expressing my turmoil visually instead. The resulting image is one of bright colours and whimsical imagery which transports the heavily emotional accident works into a new place of greater hope and free-spiritedness. And just in time, for a new collection based on the bright colours and vivid culture of Spain was just around the corner…