My Dubrovnik Sketchbook (Part 2) – Created from a Café

Almost as exciting as the prospect of filling my new sketchbook with views of Dubrovnik has been the process of lifting my sketches out of my sketchbook and onto The Daily Norm and the wonderful reception they have received from all of my kind blog readers. My last sketch post was so well received that I have been doubly inspired to fill the eager remaining pages of my sketchbook with further views from my forthcoming summer travels. But before I start my work on them, I still have a few more Dubrovnik-inspired sketches to share.

Next up are two of my favourite sketches from the bunch; favourites not just because of the views they share but because of the memories they hold. For these sketches were made during my favourite time of the day – when after a day’s hard sightseeing, we would settle down into one of the city’s perfectly scenic cafes and I would open up my sketchbook and record the always sensational views just ahead of us. 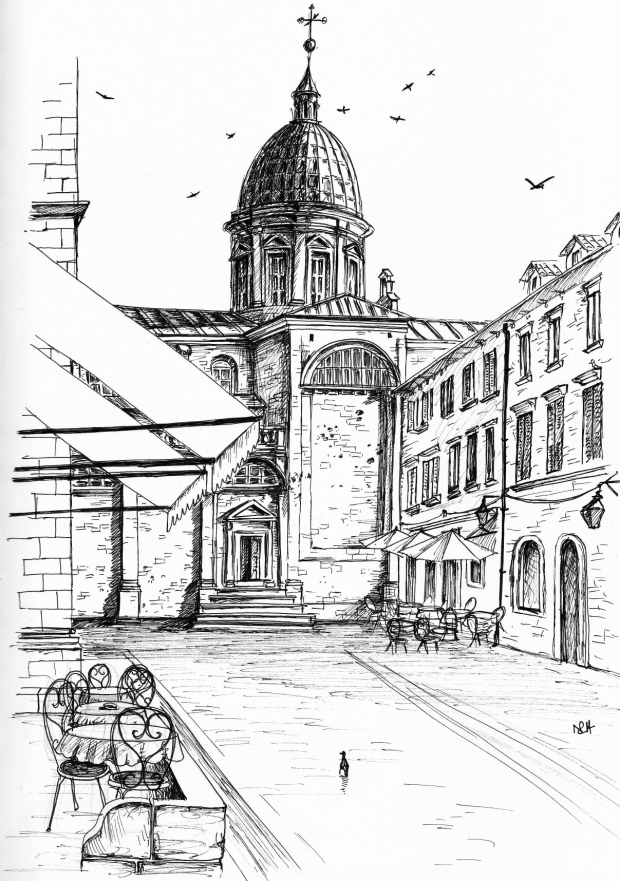 View of Dubrovnik Cathedral from the terrace of the Gradska Kavana Café (2014 © Nicholas de Lacy-Brown, pen on paper)

The first of these views was drawn from the rather swanky terrace of one of the city’s most popular cafes: the Gradska Kavana Café. Situated right opposite the church of Dubrovnik’s patron saint, Saint Blaize, and just along the shiny marble road from the city’s main cathedral, this terrace offered perfect views ripe for capturing in my sketchbook, and as soon as my coffee was served, I set about sketching one such view before us, looking down the Pred Dvorom onto the grand domed cathedral.In the bottom left hand corner you can see a corner of the cafe terrace and its mighty awning offering shade to all the elegant customers. It reminds me of Van Gogh’s famous cafe terrace featured in one of his most famous views of Arles. 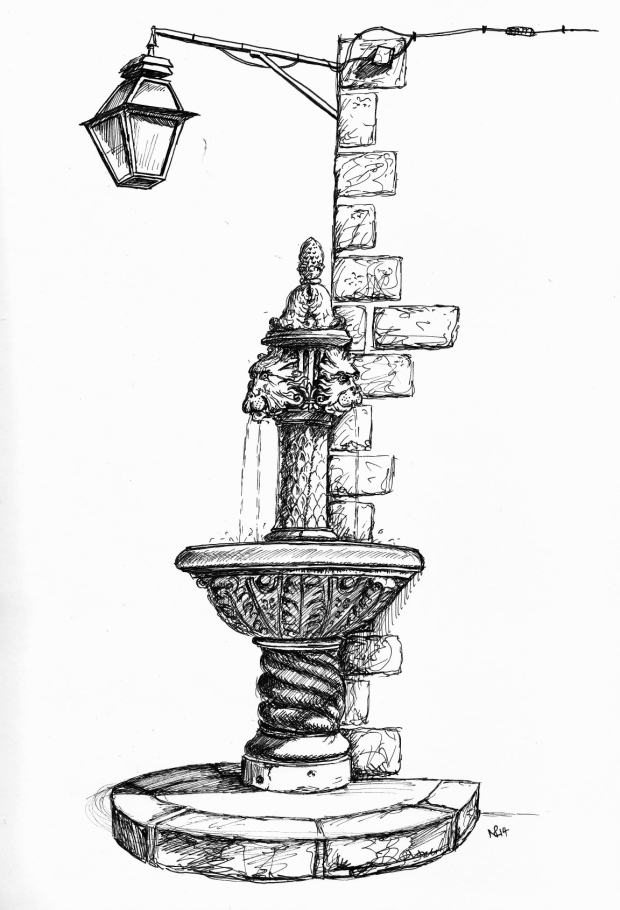 The second sketch features the beautiful Amerling Fountain, which is to be found on the corner of the bustling market square of the Gunduliceva Poljana. I set about drawing this sketch as we finished a delicious portion of fired squid and whitebait, accompanied by another creamy coffee as I drew this, our favourite of the city’s several beautiful fountains.

And just in case you should doubt the beauty of the surroundings which inspired me as I sketched these two beautiful views, here are some photos of me taken by my partner as I went about capturing the city in my sketchbook.

More to come… next time!