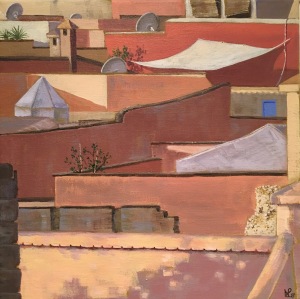 I always find it interesting to observe a city from above. It offers something of a backstage perspective on people’s lives; the washing hanging out to dry, the old furniture dumped up on the roof forgotten, or the private pride which may be someone’s roof top garden, hidden from view from the streets below. I have already said that Marrakech is a city of extremes, and that somewhat bipolar personality extends to its buildings too. While the city has become a hotspot for those seeking Arabian luxuries in marble clad spas and lavish Riads, it is interesting to see that so often that extreme of wealth and aesthetic perfection extends to what is seen only. Viewed from the roof, you see the city’s theatre for what it is: those posh patios are mere smoke and mirrors. What you can’t see is the back yard, barely built, with crumbling plaster and propped up with rough wooden supports. There too you can see the roof terraces strewn with weakly installed cabling and rusty satellite dishes, with age battered plant pots and pink plaster facades left to crack and fade in the sun. Marrakech from above is a fascinating mess, a hodgepodge of unplanned construction and time-weathered dilapidation. But unifying it all is the rose-tinged colour of the whole jumble of construction, together with the occasional beautiful mosque tower which punctuates the scenery. 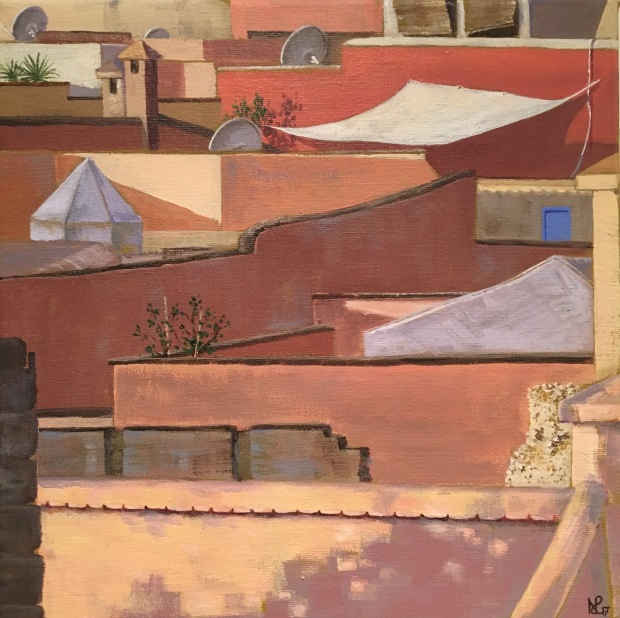 This enthralling city vision was the inspiration for a small painted study which I completed just a few days ago. Focusing on a very small cut-out of a wider landscape, it is an almost abstracted focus on the criss-cross of tumbling, crumbling pink blushing walls, together with the satellite dishes and cables and old plants peppering the scene. It is characteristically Marrakech. An unplanned mess which exudes beauty as a result.