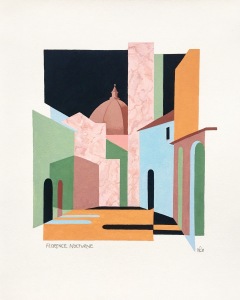 The inspirational capability of Florence is extreme. There is no doubting the city’s role in the rebirth of art in the western world and its transformation into the greatest proliferation of creativity seen since the age of antiquity. So there can be no surprise that it has inspired artists to paint, draw, sculpt and write ever since. I could paint the city endlessly. But time never stands to indulge me. I had time for just one small gouache, hastily designed on the train from Florence to Milan, but executed when time allowed me to reflect on the pastel shades and Renaissance brilliance of that impeccable city. 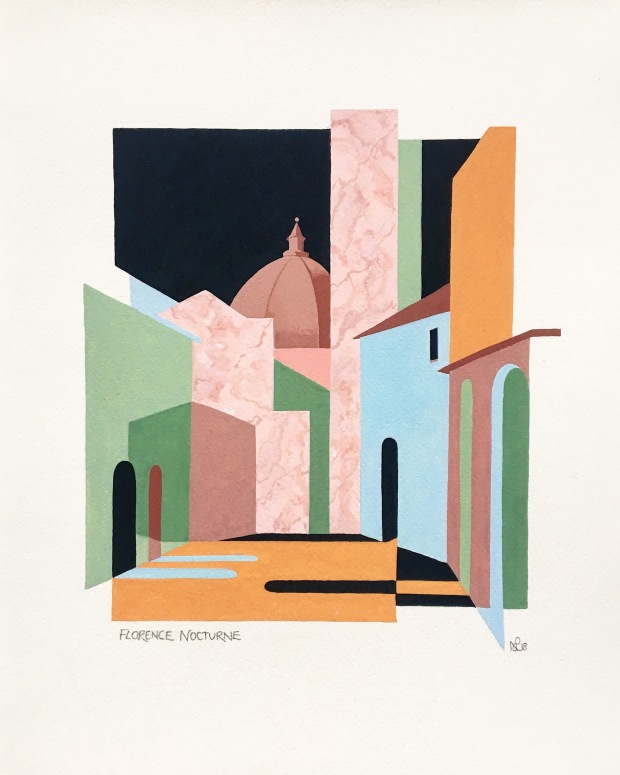 My work, Florence Nocturne, is like a musical homage to a city lost in the dream-world of sleep but whose elegant topography remains unchanged by the twilight. It mirrors the city with simple lines – it was after all a city known for the relative austerity of its grandeur compared with the later embellishments of baroque Rome and romantically Gothic Venice, and its palette reflects the pink and green marble of the ornamental Duomo.

It captures the moment when the tourists have gone home and the city sleeps, but its pearly white facades remain aglow against the dark night sky. It is my poetic dedication to Florence, the city which inspired the greatest lights of Art, and which has continued to ensnare new generations of creatives ever since.