The good thing about a small city trip in a vibrant city is that with the relatively moderate expense of a short trip, so much can be loaded into a short expanse of time that the trip provides all of the ingredients for a sustained period of inspiration and multifaceted memories which live on indefinitely. My recent trip to Amsterdam is one such trip which was worth its weight in gold. Already I’ve been painting Dutch-inspired parody pieces, sketching Norms all over The Netherlands, regularly revisiting my substantial collection of photographs and I am about to embark on a suitably Amsterdam-inspired new Norm canvas. However, one of the greatest inspirations for me was the elegance and sumptuosity of our Amsterdam hotel –  the Hotel Estheréa. The interior design of the hotel was faultless both in the downstairs public spaces and in the bedrooms. Since my return, I have scanned the web seeking out the various grand design wallpapers used, the beautiful butterflies which adorned their walls, and am seriously considering whether I too should import an oversized pink chandelier into my home. All of this comes at a price I can currently only dream of, however one important aspect of their design, which I have found cheaper to replicate, is their stunning floral displays. The hotel paid attention to every tiny detail, and during our stay, a fresh import of new flowers were installed throughout the hotel (presumably they do this on a fairly regular basis). One of the most effective displays of flowers, installed variously on several large and small tables alike, was the grouping of numerous small and single-stem vases, each containing one or two stems only. The look which resulted was far more contemporary than a normal vase of flowers.

So, returning home to London, my head buzzing with ideas, I set about searching out a variety of single-stem vases. To collect a small group of 6 or 7 would, I soon discovered, cost well over £100 and involve as many separate orders and correlating shipping charges as I would find vases. So I decided to revert my search to glass bottles. I then found one website which sells a huge range of different shaped bottles, all costing only around €2-€3 each. And so I managed to purchase myself some 14 different shaped and sized bottles, all from the same site, for a total cost of €30 including shipping. They arrived a couple of days later. I bought two cheap(ish) bunches of roses from the local supermarket (which are in plentiful supply at the moment in the lead up to mother’s day). This is the result: 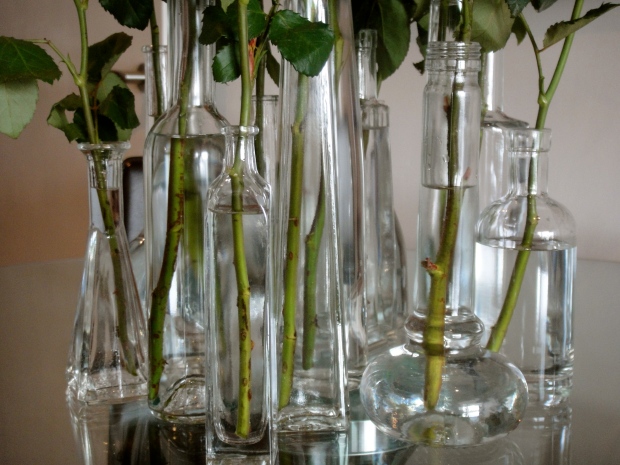 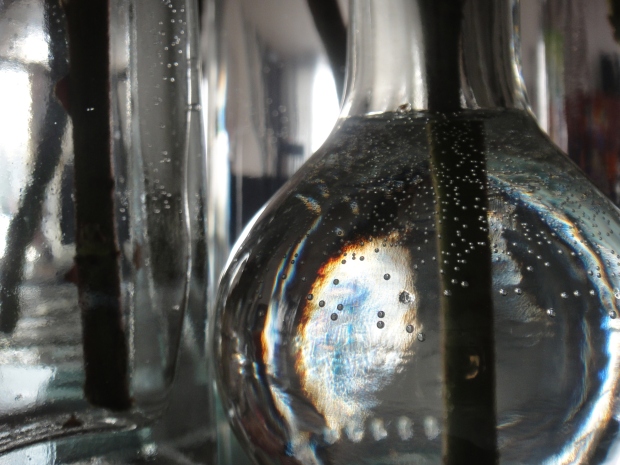 The look is contemporary and fresh. The differently shaped bottles add variety, but the use of a monochrome clear coloured glass ensures a contemporary feel is maintained. The display also feels modern because the flowers are controlled, all standing up straight rather than flopping around en masse in a vase. This control is even better achieved using bottles, since most have a fairly narrow opening.

It’s a great look for my dining table, and one that really wows as a contemporary floral display with a very boutique-chic look. But best of all, the price was definitely not boutique.

Talking of contemporary, check out my other recent acquisition – white crocuses set in an attractive metal box adorned with french writing. This brings gallic finesse to an otherwise industrial tin, while the yet unopened crocuses provide another modern sleek display piece which I kind of wish wouldn’t flower at all.

In conclusion, Spring is on its way, and in my opinion, there is no better way to breath a bit of life into your home that with fresh flowers, however displayed. Give flowers to your mother this sunday – and if you’re not a mother, remember to keep some back for yourself!

Tags: Arrangement, Flowers, Interior design, Roses, Vases
From: Comment, Travel
← The Daily Sketch: Norms (attempting to) do ballet
Next train stop: The National Gallery (aka waiting room/ hang out/ free for all) →
4 Comments Post a comment