Deconstructed Norm Sculptures in a Setting (after Henry Moore)

Henry Moore, the British sculptor, is famous the world-over for his semi-abstract rounded bronze figures and organic wood-carved nudes. His indisputable popularity as one of the greatest sculptors of our age is demonstrated by the sheer proliferation of his works on public display in town centres and parks and the gardens of large country estates throughout the UK and around the globe. His organic, satisfying rounded forms do not offend polite society, but instead offer the right about of minimalist abstraction mixed with sentimental femininity and human characterisation. His sculptures often dominate the landscape, while inviting passers by to interact with the various holes and curves intrinsic to Moore’s work. They are like a Picasso abstract come to life, or a Michelangelo mother and child melted into a tender rounded form.

Yet it is not his sculptures which attract me. Don’t get me wrong – I love his works. They are satisfyingly curvaceous, with a mixed attraction of sharp edges and smooth polish, a recognisably humanised form with a metaphysical expressionless finish, open to interpretation, and perfectly executed from every angle. But for me, the real stars of any Henry Moore show are his sketches.

Often he sketched when ideas came into his head. Consequently Moore left us with a great variety of sketches in which we can see Moore exploring the various organic forms which are now famous sculptural manifestations, as well as plenty of rough drawings devoted to the mother and child image that so obsessed him, and paintings in which Moore appears almost to capture his three-dimensional forms, imprisoning them within an eternal two-dimensional abstract landscape. Come the second world war, and Henry Moore was made an official war-artist for Britain, but not as a sculptor. Instead Moore would head down to the packed tube stations, where thousands would huddle, every night, using the dark tunnels and airless platforms of the London underground as make-shift bomb shelters. There he captured moving scenes of humans at one in their vulnerability, trying to sleep through their anxiety, curled up together for moral support.

Moore’s sketches offer us an invaluable insight into the great sculptor’s mind at times when he would pour his sculptural imaginings straight onto paper, some of which eventually made it into three-dimensional form, but many of which never made it beyond the confines of pen on paper. But these sketches are far more than just studies or ideas. They are works of art in themselves, capturing moments of intense human emotion, with a dark intensity and an often surreal setting. They are artistic masterpieces worthy of as much attention as the finished sculptural articles which have become a staple of British art all over the world.

Ever inspired by the wonderful art around me, I sketched my own Moore-inspired sculptural forms. Taking the humble Norm as the basis for my drawing, I deconstructed my Norm, presenting the customary rounded figure as a body with strings and a hollow inside, a head, two large eyes, the Norm’s characteristic single hand, and a crescent-like structure which I like to think of as an expression of a Norm’s eye-lashes. The result is a sketch full of the abstract surrealism which Moore’s own works promote, but with that hint of Norm playfulness, some strings and a blood-red hollow, all set within a shady landscape leading to nowhere. If only Moore had seen it. The Deconstructed Norm would have been slowly rusting somewhere in a park by now. Unless it was made of metal, in which case it would have been nicked…

I leave you with a mere handful of some of Moore’s incredible works on paper. Until next time… 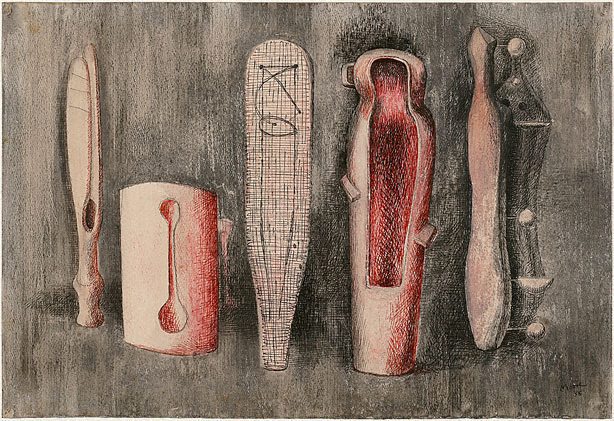 Henry Moore, Mother and Child; Drawing for a sculpture in wood and string (1949)

Henry Moore, Ideas for Sculpture in a Setting (1938)

Tags: Art, Henry Moore, Nichoas de Lacy-Brown, Norms, Sculpture, Sketch
From: Norms do...
← Never judge a Sweet William by its prickly little cover
Out and about with my iPhone – Part II →
No comments yet