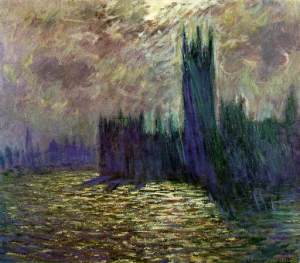 London is the word on everyone’s lips right now. Yes, the olympic games are over, but the paralympics will start in just under a week, and the buzz around them continues to grow. For the influx of visitors descending upon our currently hot and humid jam-packed olympian city, the river will be a highlight of their sightseeing tour, the huge central artery which snakes through the crowded metropolis, marking the physical divide between the characteristically different North and South, providing grand vistas aplenty from the many elegant wide bridges, and, on the South Bank, playing host to the rejuvenated cultural heartbeat of the city.  On the river too stand some of London’s most prominent sights: the Tower of London, Tower Bridge, the London Assembly Building, the London Eye, and this one: The iconic Houses of Parliament.

What the Eiffel Tower is to Paris, Big Ben is to London. Strangely enough, Big Ben is the bell in the tower rather than the tower itself, but it’s this high-gothic, grand and decadent campanile which gets the tourists excited and marks the beginning of each new year with such ceremony and aplomb, surrounded by fireworks, the iconic spectacle marking the passage of every significant moment in the city’s history. The view of Big Ben and the House of Parliament to its side have understandably inspired photographers and artists throughout the ages. Monet was fascinated by the effect of light in the dense fog surrounding the looming silhouette of Parliament, while Turner painted the fiery ravage of Parliament’s predecessor repeatedly.

This is my take on Parliament. It’s part of my cityscape collection, a small group of city views which I painted back in 2007 when I was trying to get the hang of oil paints after a long period of painting in acrylics. So it’s more of a study piece really, but still one of my favourite pieces of London.

Oh, and if you like it and fancy my painting hanging in your home, you can get limited edition prints of the work on my main website here.

Have a great Sunday.