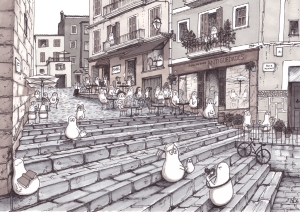 So we’ve seen Norms resting over a coffee outside the Café Grand Hotel. And we’ve also seen them strolling along La Rambla in search of flowers. But far be it from me to suggest that Norms are little recreational hedonists. True, they like to relax, but they prefer to do so in only the most erudite of circumstances. Very few Norms are the sit around and do nothing type. Intelligence comes naturally to the Norms, after all, they were named after a famous and notoriously tricky piece of legal philosophy. And so even when they are sitting down to rest, their curiosity peaks, they remain inquisitive, they debate, they philosophise, and best of all they read.

This is the reason why in Palma, one of the Norms’ favourite corners of the city can be found where the Calle de Arabi meets the Cuesta de la Pols. It’s an area so uniquely cosy, with its cobbled streets, uneven staircase, and the ancient behind of the Church of San Miguel, that for many it reminds of the streets of Paris’ Left Bank or the area around the Spanish Steps in Rome. But it is not only this intellectual atmosphere which draws the Norms. In this same corner can be found one of Palma’s most charming bookshops , Babel – a veritable Aladdin’s cave for the scholarly Norm – and all with the added benefit of its very own cafe. Now that’s the Norm way to relax. 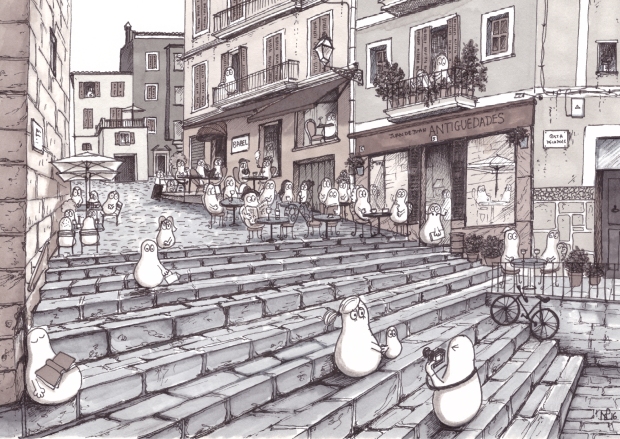