Sometimes it’s the simple things that are best in life: It’s a well known philosophy, and one which one does well to remember in this world of plenty, of multiple-distraction and rapid pace technology. Living in Mallorca it was a sensation I knew well, as my favourite moments would be sitting on a sunny bench besides the harbour side with a book and my beloved by my side. No music, no gimmicks, just the sound of water and the bobbing up and down of boats. Now I’m back in London, I feel the same when I’m enjoying the great expanses of green which we city dwellers are so fortunate to have on our doorstep. Right where I live I’m a mere stroll away from Clapham Common, Wandsworth Common, Battersea Park to name but a few. And in those spaces one can strip back the protective urban layer and enjoy the simple pleasures. 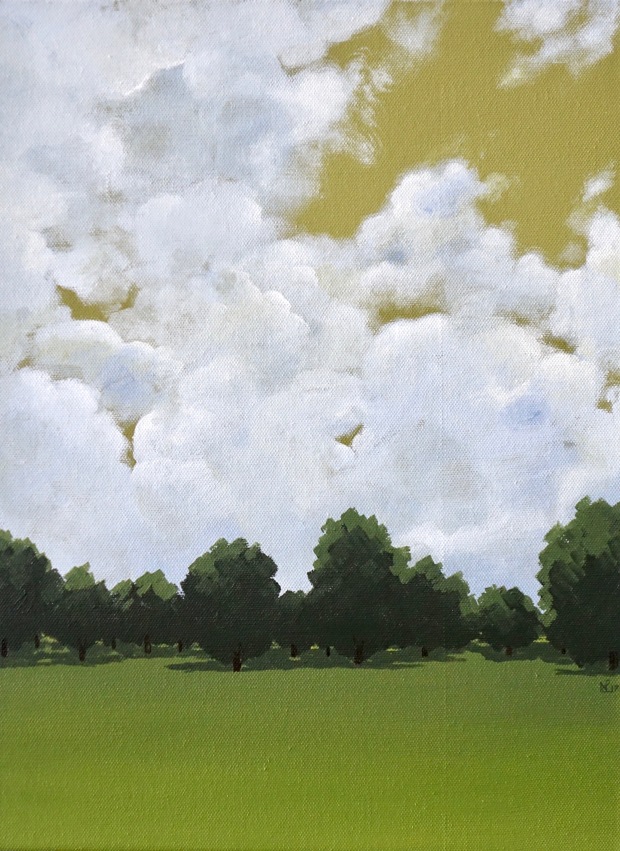 Such was my inspiration for this piece, my first completed work on canvas since I returned to this mammoth city, an urban conglomeration so large that perhaps this small painting speaks in protest. Inspired by the sight of a vast beautiful tree, I planned a work for which this simple landscape of trees and clouds would form the backdrop for a more dramatic tree portrait. But when I walked away from the canvas, with the protagonist still unstarted, I revelled in the simple beauty of this mere line of trees. So I declared this painting finished: my ode to verdant simplicity, and the moments I most cherish, wherever I happen to be.