The incredible thing about Paris is not just the quality of the exhibitions it puts on, but how many of those quality shows it manages to host in a single season. The Grand Palais alone has some 4 or more exhibitions showing at any one time, and as Dominik and I took the long walk around the huge neo-classical structure that is the Grand Palais, we noticed that there were queues lining the building on almost all four sides – testament not just to the popularity of its exhibitions, but also to how many exhibitions were showing in the space of a single (admittedly huge) building.

The benefit of these multiple shows (and also the disadvantage if you fatigue easily) is that when you buy one ticket, you can combine your first exhibition with another – or in fact the lot. So having been wowed all morning by the cubist prowess of Georges Braque, and braked for lunch in an excruciatingly expensive brasserie nearby for snails and an ‘amburger (imagine said in a French accent) we returned to the great palace of art to see the second of their major autumn retrospectives: a show devoted to the work of Felix Vallotton. 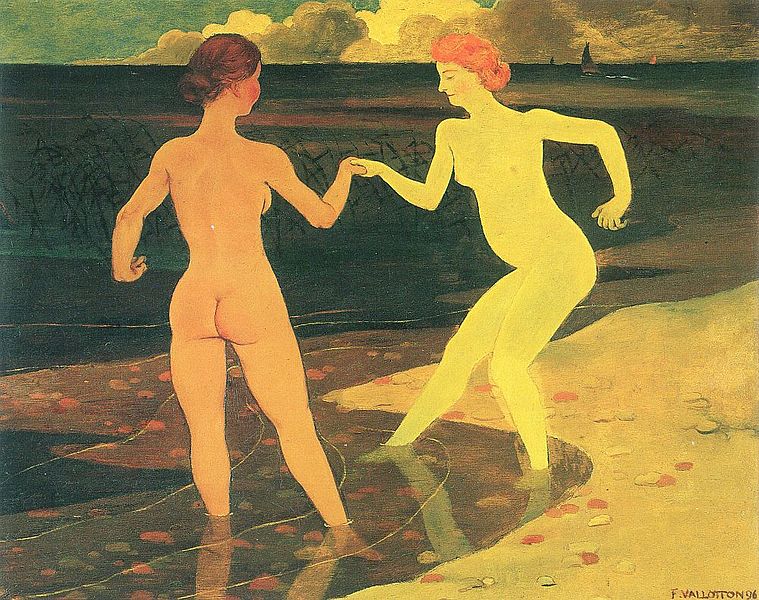 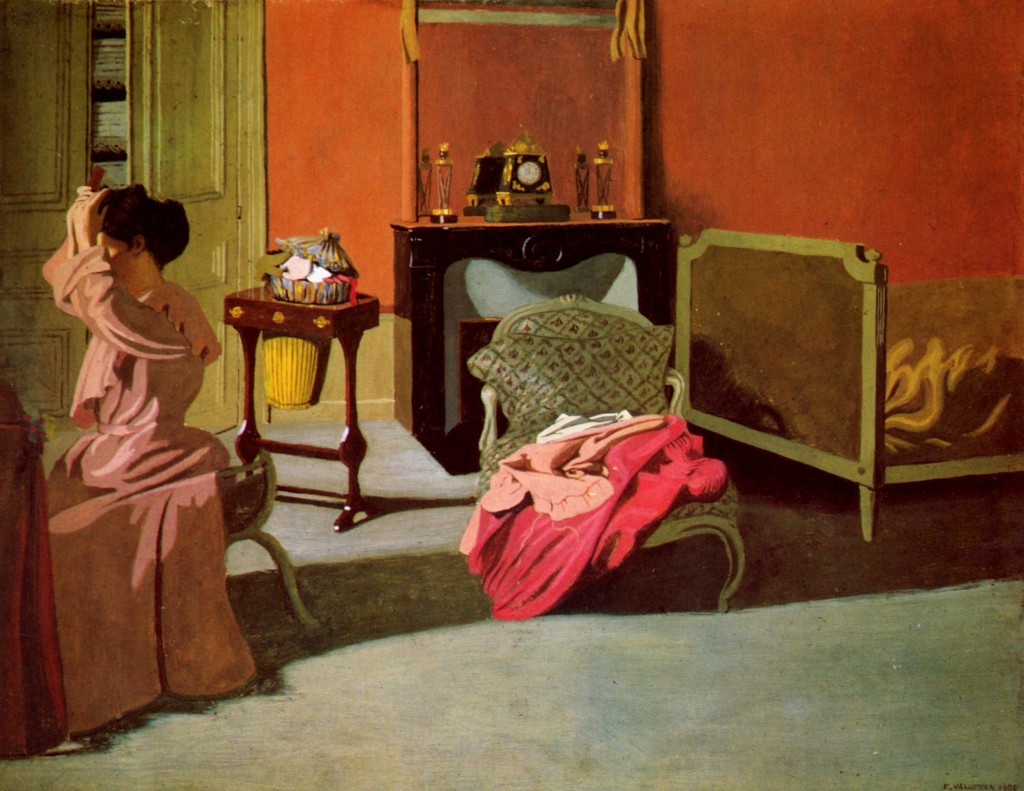 I wasn’t familiar with either the name Vallotton or his work before I ventured to Paris this autumn. However, as a quasi-member of the French Nabis movement of art, I was already familiar with a number of Vallotton’s artistic allies – Maurice Denis, Pierre Bonnard and Edouard Vuillard being amongst their number. The Nabis were a group of post-impressionist avant-garde artists who took their name from the word Nabi which means a prophet in Hebrew and Arabic. They were so called because they believed that their art revitalised painting in the same way that the ancient prophets had rejuvenated Israel. At the heart of their movement was another term, or style of art, sythetism, which involved the flattening of colour panes and shadows, a heavier reliance on dark outlines, and a preoccupation with the canvas, as “essentially a flat surface covered with colours assembled in a certain order” (so said Maurice Denis). If I was to describe the style in my own words, it would be a painting without depth and perspective, so that the folds of a dress for example would be reduced to a single colour for the shadow and a single colour for the light, with no variation of tone demarking the shape or texture of the material.

Whether or not Felix Callotton, born in Switzerland in 1865, came to adopt the style as a result of the influence of his fellow Nabis is less certain. From the exhibition, it would appear as though Vallotton’s distinctive flattened panes flowed naturally from his brilliant virtuosity with woodcut printmaking. After all, the finish of woodcut will invariably involve the flattening of light and shadow, as the synthesis of two colours or tones – generally black and white – combine together to illustrate all of the details of an image – black for shadow and features; white for light. And having spent a good decade or so of his early career woodcutting for the sake of making money, the suppression of depth and shadow made its way seamlessly into Vallotton’s paintings which followed. 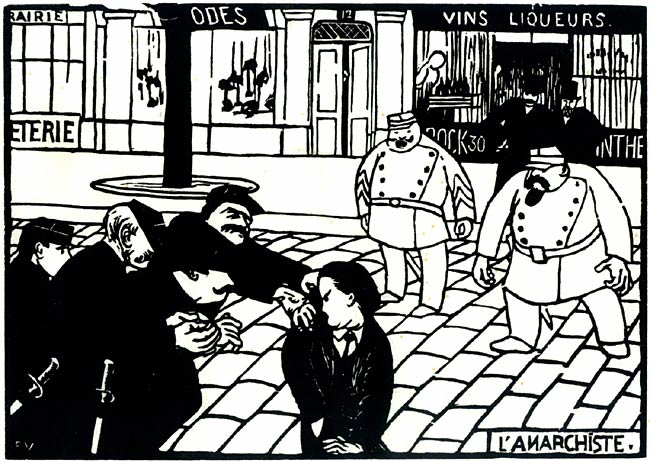 Being recently enamoured with all things printmaking, it will not surprise the reader of this post to learn that I was struck first and foremost by these brilliant woodcuts, which are so full of detail and humour for so intricate and painstaking a medium. In Vallotton’s Intimacies series, he depicts the mundane and mediocre interiors of intimate home settings, but always his images are full of drama, whether it be because of his captivating use of shadow, or the sense of scandal and emotional anxiety which is suggested. From these prints, Vallotton went on to depict brilliantly the everyday street scenes of his Paris surroundings, doing so with whimsical detailing and a surprising attention to detail, and while Vallotton later abandoned woodcutting when the trade had left him sufficiently well furnished with money, his return to the medium to depict the First World War in his This is War! series in 1916 saw him create prints which were equally brilliant, despite the more serious tone of the subject matter.

As to Vallotton’s paintings, I adored the colourful products of his sythetism era, where the influence of his printmaking and the Nabis resulted in works where the subject matter become secondary to the overall pictorial patterning which was being created across the canvas. Just look at his painting of a theatre box for example (“Box seats at the theatre), a canvas which could quite possibly be a Rothko with its simple horizonal colour planes, and which only becomes more figurative thanks to the simple shapes denoting the two occupants of the box and that masterly glove with its single-coloured mauve shadow, suggesting an emotional dimension to the story being depicted.

Less impressive, sadly, were the works which Vallotton went on to create in his later career, as he abandoned synthetism and the Nabis, and sought to concentrate on depicting primarily the nude, and latterly huge mythological parodies which were more Disney than anything else. Thank goodness that at the end of his career, and at the end of this show, Vallotton chose to return to the medium of woodcut which, despite their depleted tonal palette and reduction of depth and realism, are perhaps the most captivating and visceral works of all. 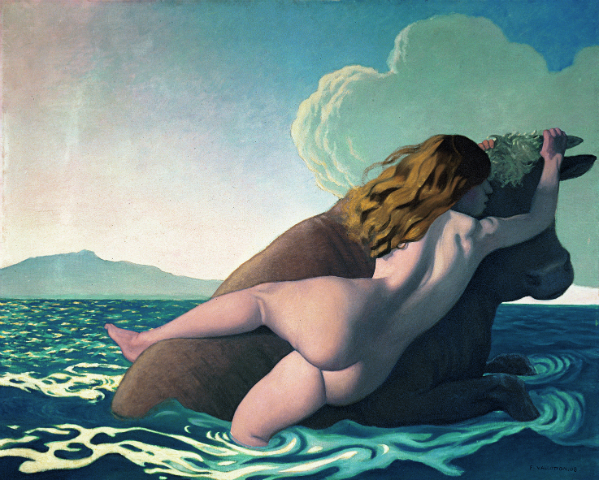 Felix Vallotton: The Fire Under the Ice is on at the Grand Palais, Paris until 20th January 2014