It’s valentine’s day, the day when millions of singletons across the globe shrink in disgust at the notable increase of embracing couples on the streets and inappropriate PDAs (public displays of affection), and when millions more feel the pressure of their partner’s expectation that they out do last year’s offerings with overpriced roses and a box of unwanted chocolates. But none of that here. At the Daily Norm, valentine’s is just an excuse to celebrate the more intimate, emotional side of art, while also using it as an opportunity to present a brand new Norm painting to the world! When I think of love, there is only one painting which comes to mind. It is, perhaps unsurprisingly, the same image which dominates the search results page when you type “The Kiss” into google. It is, of course the world’s must famous and celebrated embrace, The Kiss, by Gustav Klimt. And here, for your viewing pleasure, is the Norm re-inactment along with the original.

The Kiss (after Klimt) (acrylic and gold leaf on canvas, 2012 © Nicholas de Lacy-Brown)

It’s a crying shame that like Van Gogh’s sunflowers, or Monet’s bridge/waterlillies, or Degas’ ballerinas, Klimt’s masterful golden embrace has become so commercialised, replicated and reproduced onto every form of tourist tack, from lamps and mousemats to beaded curtains and bed linen, that the automatic reaction of a viewer to the image is to see it through a kind of autopilot. As with all recognition, one fails to actually look, really look at the image. When I embarked upon a Norm version of Klimt’s work, this is exactly what I had to do. Whereas previously I had dismissed the image as cliché, when I started painting my own version, I saw so much more. 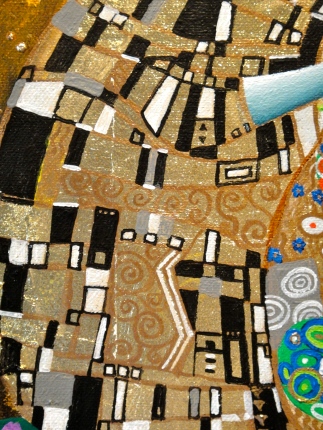 First of all, the painting is a superb fusion of evocative emotion mixed with art nouveau-inspired flattened design. It makes for an interesting synthesis, and seems to emphasise and centralise the intensity of the embrace all the more, since the power of the emotion charging through the embrace appears to have instigated the creation of a fantasy world around the couple, as they appear to burst out of a planet of flowers, and all around them, a cosmos of golden stars twinkle. The patterns of the clothing are also interesting. With squares and geometric patterning, the man’s clothing appears quite strong and masculine, where as the woman exudes a more feminine softness with round flowery shapes and waves. However, interestingly the fusion between the characters seems to translate into their clothing, as interspersed between the man’s squares are small patches of swirls, while on the woman, round shapes are occasionally interrupted by squares, particularly where her body touches the man’s. Moreover, the aura-like golden space around them is full of swirls which appear like stars or moving, active emotions. Also, at the bottom of the canvas, the abundant flowing golden plants trailing off the couple seem to suggest fertility, not least because of  the prominence of the upturned triangle which hints at female sexual organs.

More interesting still is the pose. From the painting’s title, one would draw the inference that this is a happy, loving embrace. However, having studied the work more closely, there is, to my mind, something all the more sinister about the pose. While the man stands tall and rather menacing with his black hair and firm grip of the lady, she appears to be subservient in the embrace, kneeling before the man. She appears to hold the man, not tenderly, but as though trying to loosen his grasp on her. Notably, her right arm appears to be screwed up into a tense fist rather than tenderly resting upon his shoulder. It also seems significant that the kiss is not on her lips but her cheek, as though the lady has turned her face just in time to avoid the man’s approach.

As with most great masterpieces, much is left to the public’s interpretation, but I am at least glad that in Normyfying this work, it has given me the opportunity to study it further and give it the kind of appreciation it deserves. As for my Norm reimagining, I think that the pose lends itself well to the Norms who, in their curved body shapes, fit effortlessly into the art nouveau theme of the original. Here the awkwardness of the embrace could still be interpreted either way, although as Norms only have one arm, my lady Norm is without her right screwed up fist, while the man cannot grip so firmly upon his Norm lover with his second hand. There was a lot of detail which needed painting in order to do Klimt’s original justice, and as the main photograph doesn’t necessarily show this up, I have included close up detail shots of my Norms (above), as well as a photo showing the effect of the gold leaf when a flash is used on my camera below.

The Kiss (after Klimt) (acrylic and gold leaf on canvas, 2012 © Nicholas de Lacy-Brown) - showing effect of a flash on the gold

In the meantime I wish you all a very happy Valentine’s day, hoping that the day is everything you want it to be (if only if it means the effective avoidance of couples!). For those of you more inclined towards all things romantic, I leave you with a gallery of some of my favourite artistic manifestations of kisses, from Rodin’s sculpture to my own Norm version of Robert Doisneau’s Le Bazier de l’Opera.