Norms in Rome | The Ancient Forum

It is a fact universally acknowledged that Norms are mega history buffs. From the ice age to the golden age of the Renaissance, from Emperor Nero to Emperor Napoleon, the Norms soak in historical facts like they do rejuvenating sunshine. Lucky then that in Rome they can get both. In buckets. And where better to start the historical immersion than in the place where it all began: the Forum of Ancient Rome.

It’s not all that much to look at now, with its scattered ruins ravaged by time and multiple pillage, but with a little imagination, how mesmerising it is to recreate the kind of historical drama which played out in this place. Here it was that the steps of the Senate ran with Julius Caesar Norm’s blood. Where the great orator Cicero Norm would enchant his audiences with legal rhetoric. And where, just up the hillside, generations of magnificent but despotic emperor Norms would hold sway. 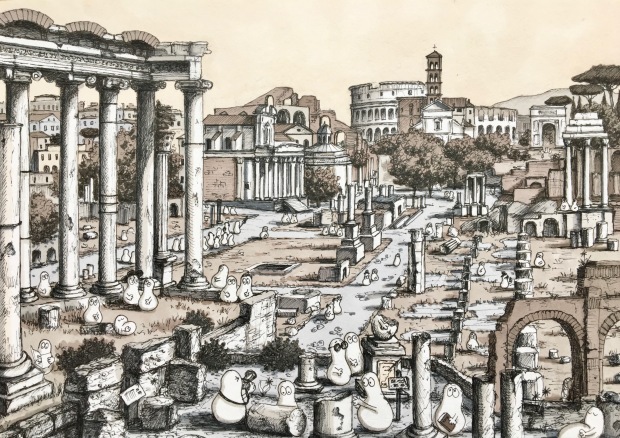 The broken rubble and the patches of grass don’t seem to do justice to what this place once was. But the Norms love it all the same. Here one can really take a tangible Norm-bounce back thousands of years into the past. And when the time comes to return to the 21st Century, the glory of modern day Rome reminds why this city continues to be a bustling contemporary metropolis, beloved of Norms everywhere.