When most people think of Spanish cuisine, they think of tapas, and why not? These little dishes are a fantastic excuse to sample as many tastes and flavours of dishes from all over Spain as you can manage, while encouraging the shared social environment which the small dish concept inspires. Unable to decide what large dishes to cook when I was over in Spain, and with no recipe books close to hand, I decided to opt for a few simple tapas dishes which I could remember off the top of my head and which are inspired by my own tapas experiences in Andalucia and beyond. Having cooked these tapas creations, you can then supplement your tapas feast with olives, bread with delicious olive oil and different flavoured dipping salts and platters piled high with fresh serrano hams and manchego cheese (see mine at the bottom). You’ll find yourself with way too much food (unless you’re feeding a small army), but the beauty with tapas is that much of it will last for days – bonus!

Great to kick of your evening as a moorish accompaniment to a glass of wine or two, these salted almonds are really easy to make. Take a baking tray and pour in enough olive oil to cover the base. Then throw into it (carefully – I’m not encouraging kitchen recklessness you do understand) 250g of blanched almonds, and sprinkle them with some good quality sea salt and a teaspoon of smoked pimenton. Give the whole lot a good toss, and place in the oven at 180 degrees c for around 20 minutes, tossing every so often during cooking. Be careful not to leave them in for too long – they may look ok on the outside but they can become burnt on the inside if the cooking is overdone. 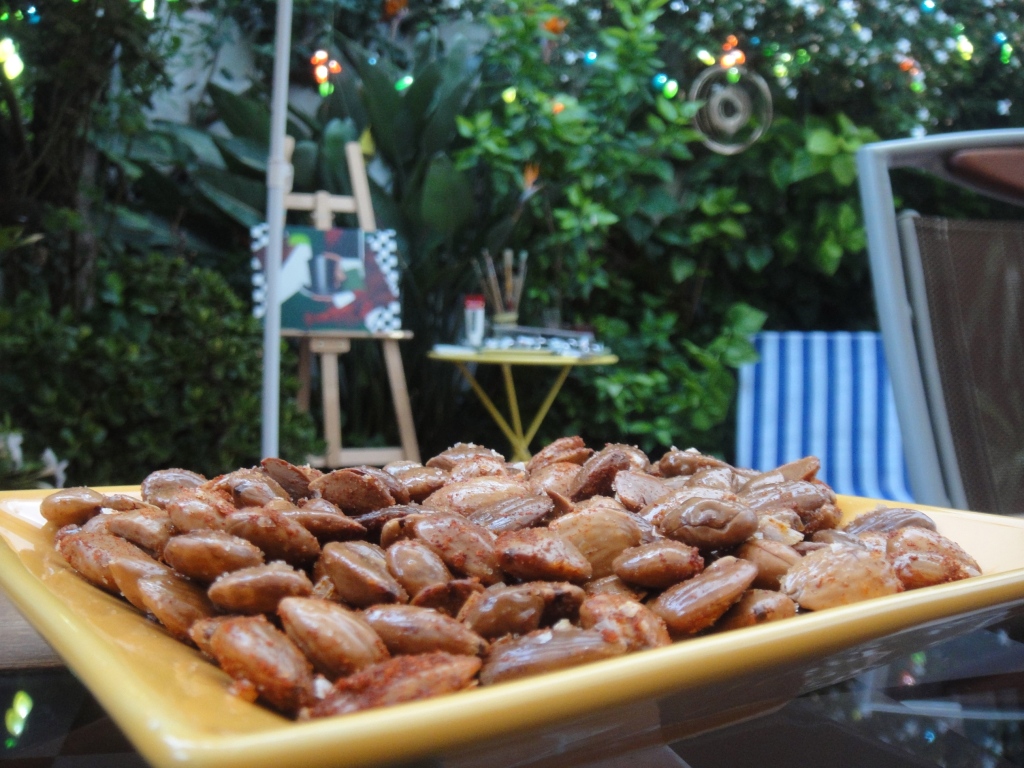 Russian salad is a tapas staple in traditional tapas bars all over Spain. You can alter the amounts of ingredients below depending on how many you’re cooking for. This made enough for a good 6-8 small tapas-sized helpings.

Start by making your own mayonnaise (if you can be bothered). Whisk up a large egg with a teaspoon of dijon mustard, 2 teaspoons of white wine vinegar and half a teaspoon of salt. Then to this very very gradually whisk in 300ml of oil – for those who like a mild flavour, use sunflower oil, but for a traditional Spanish flavour, extra virgin olive oil is a must. Doing this in a food processor is definitely the easiest way, but for those like me who are in a little holiday home in Spain without the best equipped of kitchens, the good old balloon whisk and a determined wrist can still do the job. Once you have made a nice thick mayonnaise, squirt in the juice of half a lemon (to taste) and 1-2 crushed cloves of garlic.

Meanwhile have around 1kg of small new potatoes boiling away nicely (chop them as necessary so they’re roughly the same size). Once tender, leave to cool. Once the potatoes have reached room temperature you need to add a good 4-6 tablespoons of mayonnaise, two tins of tuna (preferably in oil), a one or two of cooked diced carrots and a good handful garden peas, 4-6 chopped gherkins, two tablespoons of capers and some chopped parsely. Then whack in a good dose of seasoning to taste, and play around with flavour – you can add more mayo, more garlic, more lemon, different herbs – whatever you like. I guarantee it will be delicious whatever you try (within reason – obv). 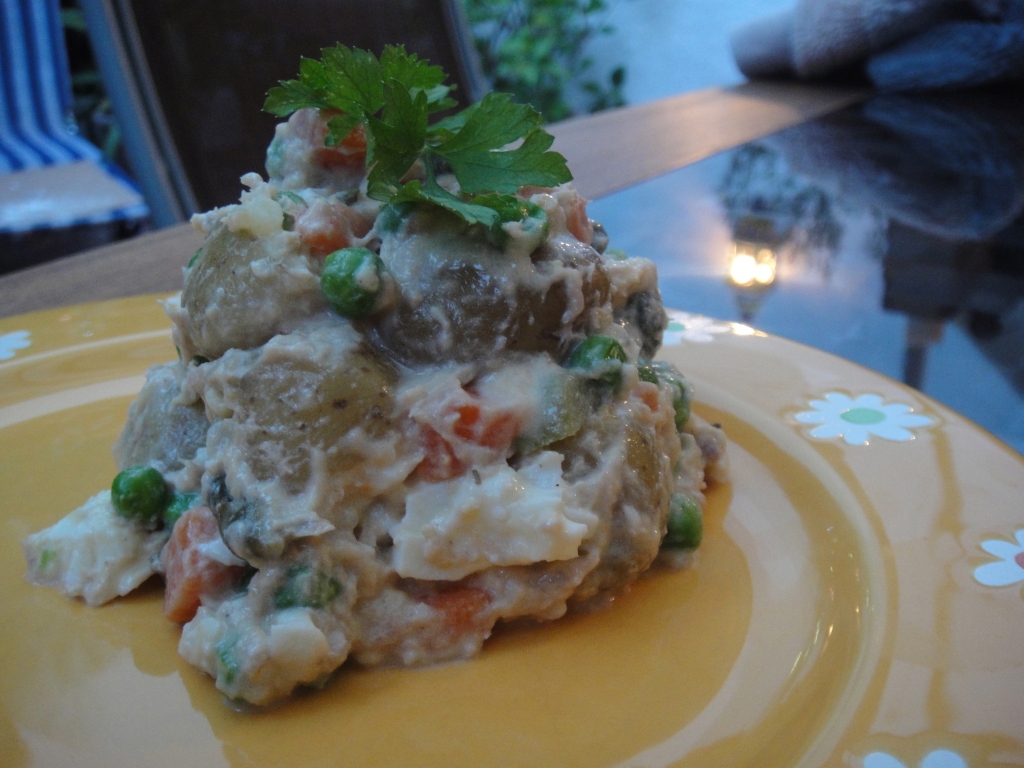 A small portion of Ensalada Rusa

END_OF_DOCUMENT_TOKEN_TO_BE_REPLACED

As far as gastronomic finesse goes, Madrid is not as renowned as some of its neighbouring Spanish cities. However the buzz word around Madrid is inevitably tapas, and an innovative approach to tapas is what Madrid does best. Upon arriving in Madrid, late on a Friday night, we knew that many of the most popular tapas bars would already be heaving with the hip young Madrillanean crowd. 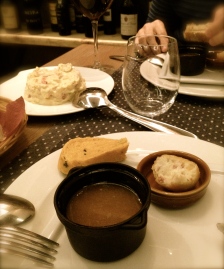 One of my favourite tapas bars is Lateral in the Plaza de Santa Ana, a trendy restaurant which offers a fresh and unpretentious approach to tapas classics and innovations alike. The problem is, its prices are so reasonable, and its flavourful offerings so delicious that the place is always packed. And cashing in on their popularity, the restaurant does pack you in into ridiculously tight spaces – generally four people will be crammed in around a corner table the size of a large computer monitor… there is barely room for your knees to squeeze under, let alone for the various tapas dishes to sit upon the table in unison. They also tend to rush you through the meal so that they can more swiftly eat into the lengthening queue which forms outside the restaurant each evening. 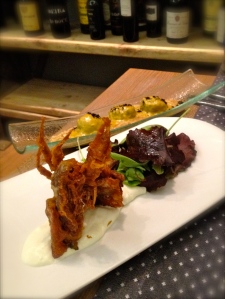 Finding Lateral to be, predictably, pack out with queues stretching well into the buzzing Plaza de Santa Ana, we headed a few blocks down the road along the Calle del Prado, where we stumbled upon Va de Baco at 4 Calle del Prado 28013. The restaurant is seemingly quite new, decked out with chic lighting and cabinets brimming full of wine.  But the real star was the food. To start we were given a free aperitif which comprised a consommé style soup in which well-seasoned chickpeas bobbed gracefully, while on the side a super-creamy jamon croquette added some texture to the dish. Moving on to the tapas we ordered: simple, traditional favourites such as Ensaladilla Rusa (a mayonnaise-based potato salad with tuna a crunchy vegetables) and albondigas (meatballs) were served with contemporary twists such as the creamy curry sauce of the albondigas. More adventurous was a tapas of spider crab, delicately served with a potent wasabi mayonnaise, while the real star of the night was a ginger cream dessert with slices of mandarin and a passionfruit sorbet accompanying – exquisite. And best of all, the final bill, including a large carafe of Rioja plus two glasses extra at the end of the meal, was a mere €45 for the two of us. 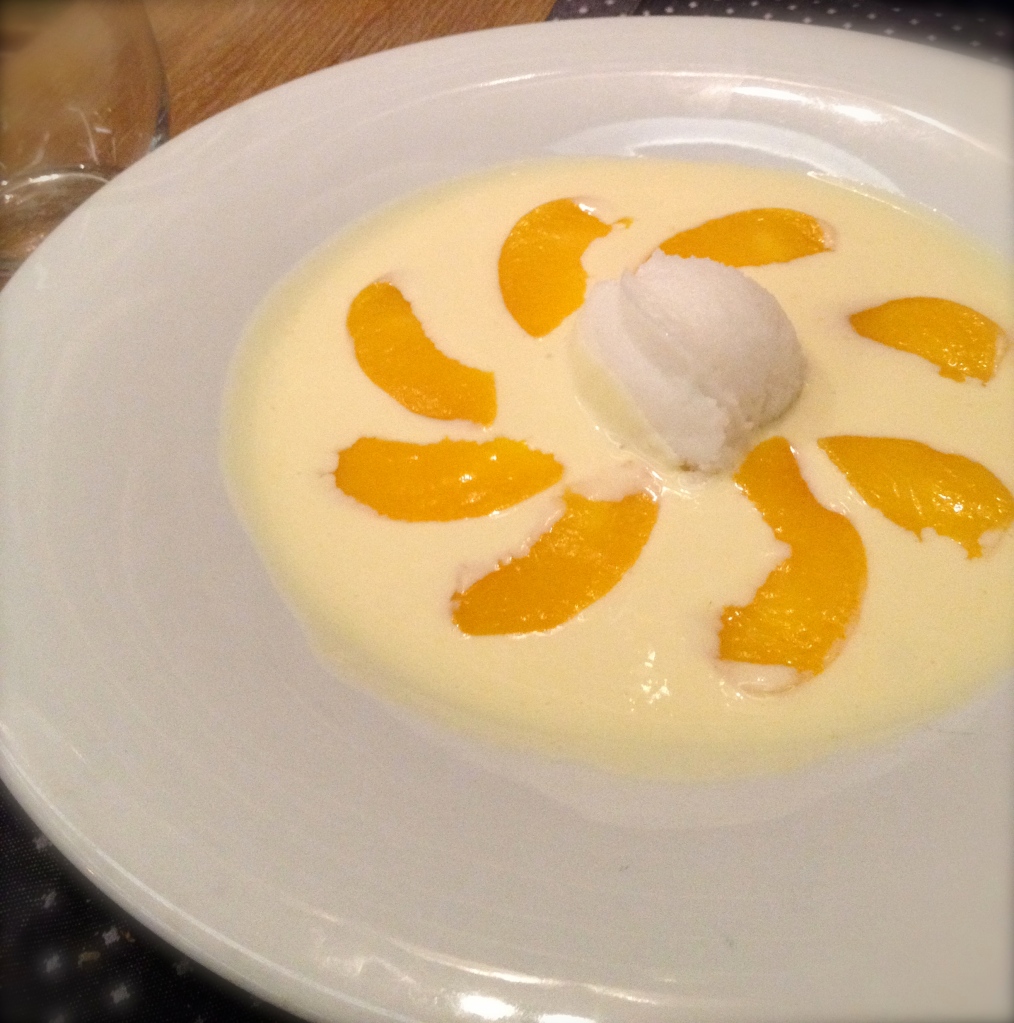 On our second night in Madrid, we ditched the tapas trail for a hispanic-scandinavian fusion in the form of trendy new restaurant, Ølsen (15, Calle del Prado). The recently opened restaurant is already a firm favourite of the Madrid cool-crowd, with minimalist woods, low lighting and a chilled lounge soundtrack (I distinctly recognised Hotel Costes Volume 15 while we were dining) creating a very atmospheric dining ambience. As for the food, which for the most part pulls on Scandinavian influences, we were constantly thrilled by attention to detail and imaginative flavour fusions. 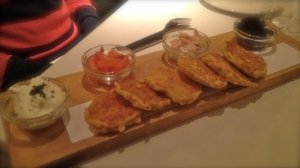 To start we shared a fish sharing platter comprising sweet corn cakes and a selection of smoked salmon, smoked trout, caviar and a delicious taramasalata-styled smoked fish roe accompaniment. The combination of sweet, soft cakes and smokey fish was divine. On the side, bread was served in the form of various bagel-shaped creations, ranging from a sweeter glazed brioche to flat seeded cracker. For mains, we both chose a smoked lean brazed pork, with a red fruit and beer sauce and horseradish mashed potatoes. The meat was so tender and caramelised that along with the acidity of the red fruits and creaminess of the mashed potatoes, this dish took comfort to another level. A comfort which was then cranked up to a level of ridiculous self-indulgence when I had my dessert – a giant, soft and unctuous Oreo cookie with red fruits icecream. Oh god, I would return to Madrid just to have another one of those. Warmly recommended, if not stipulated as a necessary experience of the good life. 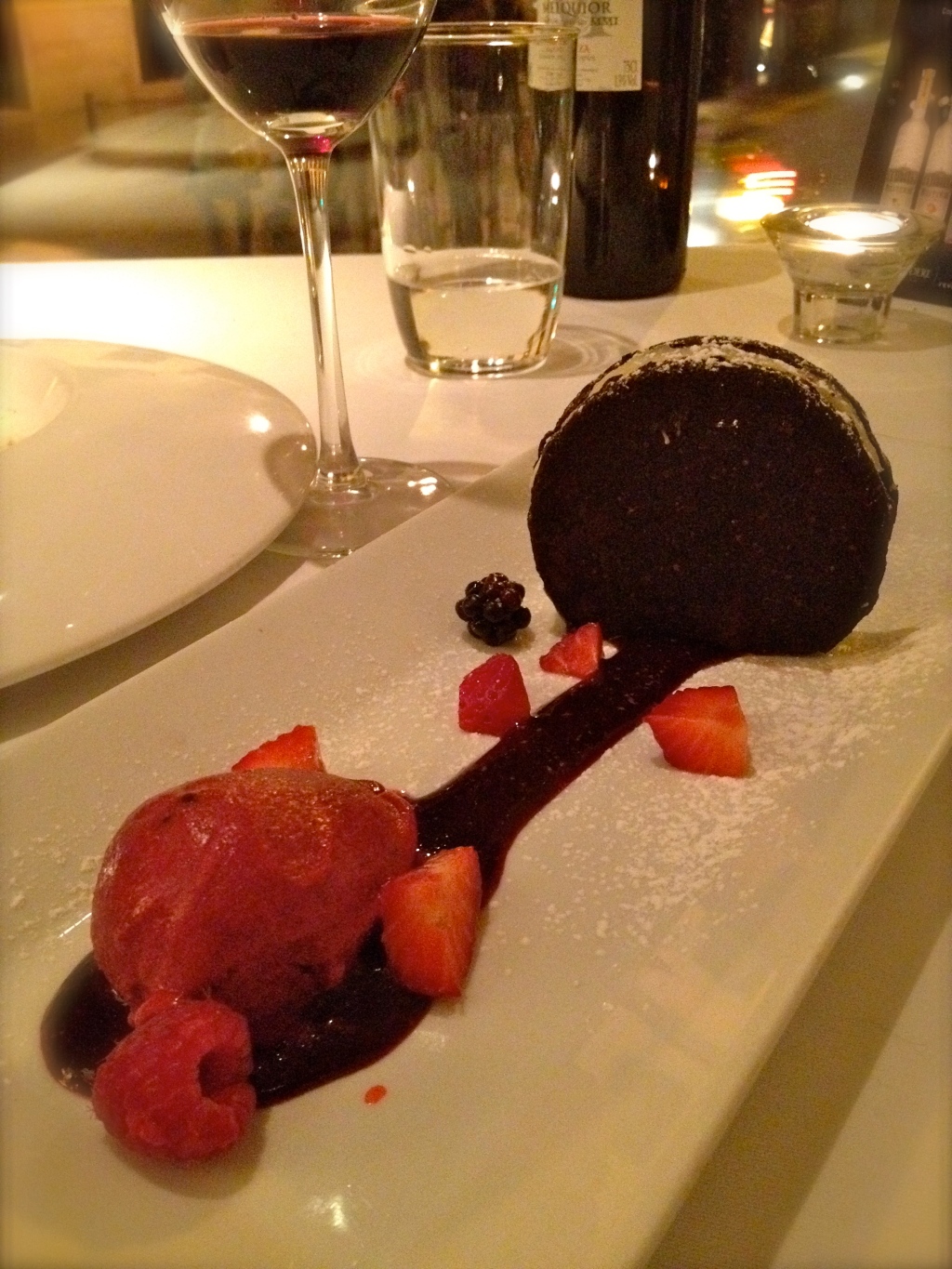 But all this was just the start. Salamanca’s gastronomic offerings proved to be an altogether new level of culinary brilliance. Check out The Daily Norm tomorrow when I will try to put those incredible flavours into words!