Amsterdam Part IV: The Hotel and the Restaurants 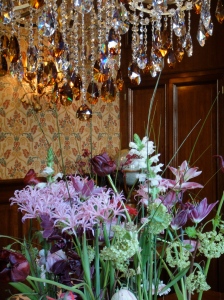 Fresh flowers and chandeliers in the Hotel Estheréa

I’m back from Amsterdam and pretty fed up about it. I find myself crossing the road looking out obsessively for cyclists and finding none. Here, the now familiar bong of the tram bell has been replaced by sirens, and these light filled transport carriages are superseded by the claustrophobic moving coffins of the London Underground. I look at buildings, thinking that something is wrong – then I realise that beneath them there is no reflection. But it’s always been my firm belief that part of the success of a holiday is how well you remember it. Consequently I have set about looking through and editing my prodigious collection of photographs, sorting through the postcards I buy obsessively whenever I go on holiday (with no intention to ever write, or send any) and recollecting the food experiences which filled by Amsterdamian days. With this in mind, I write today in an attempt to share my experience of the restaurants, and more importantly my accommodation while in Amsterdam.  As I’ve said before, in this time of the vindictive TripAdvisor professional complainant, where countless businesses in the hospitality industry are closing down because of picky, negative reviews posted online like school yard insults, I think it is only appropriate that a good experience is also applauded online, and shared so that fellow jetsetters can head off to a recommended restaurant or hotel, emboldened by some honest advice to temper their expectations. 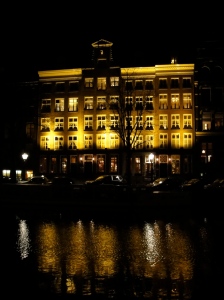 Exterior of the Hotel Estheréa

I could use almost every superlative in the thesaurus to describe the Hotel Estheréa and still not do it justice. This hotel, a child of the boutqiue revolution, but also the mother of all opulent sophistication, was a faultessly exquisite base for our Amsterdam stay. The reason, ultimately, for the success of this hotel is attention to detail. In the bedroom, two bottles of water would be provided free to guests everyday – a small thing, but often something which you really feel the need of at the end of a heavy evening and have to revert to what ever dodgyness flows from the tap. In the foyer, tea and coffee is provided all day, a huge range of teas being on offer, and complimentary cakes, biscuits, sweets and multivarious nibbles in retro glass jars. In the various reception rooms, the interior design is stunningly executed with an emphaisis on rejuvinated Victorian elegance – richly patterened wallpapers, huge low hanging chandeliers, various species of taxdermy under closhes and in frames, large damask covered arm chairs, a book-lined library and an array of fresh flowers embuing the air with their fragrance, single stems in collected ecclectic vases and huge bouquets greeting guests in the reception. 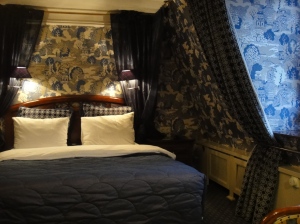 Our bedroom at the Hotel Estheréa

Head for the gold and glass lift to the rooms upstairs and you will find a range of bedrooms decorated in an impressive range of different schemes. Ours was a luxuriously drapped room in the roof – spacious, lined with a lavish chinese themed wallpaper of blues and gold, a sinfully comfortable bed loaded with embroidered cushions and a throw shot with blue and gold silk, and a stunning view looking over the Singel canal – one of the principal canals lined with the grand townhouses of former traders and merchants. Admittedly not all rooms benefit from a canal view, and you do have to pay more for the privilege. But I think it’s well worth it – and the premium is not much for the pleasure it provides. Finally the breakfast, while not cheap (18 euros per person) is the perfect set-me-up for the day, including champagne, cooked and continental selections and, best of all, various little pastries and cakes which look like they walked straight out of a Parisian patisserie. Finally I should mention location – it’s perfect, pretty much equidistant from all the main points of interest, so that Anne Frank’s house, the central station, the rosy red lights and the museum district are all within walking distance (though you need stamina – but there’s always that complimentary hotel tea to sustain you when the walking gets to much). 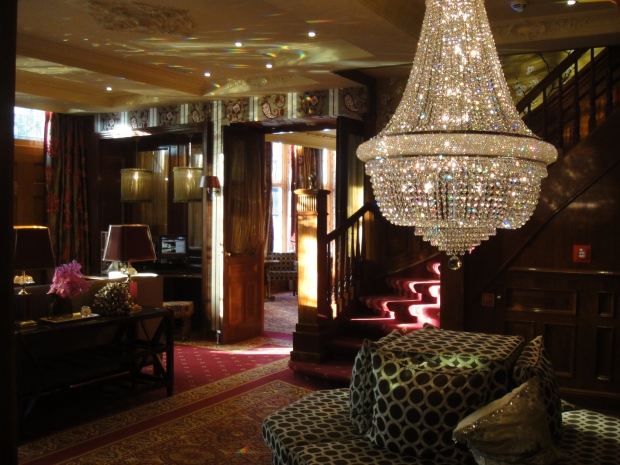 Main foyer in the Hotel Estheréa 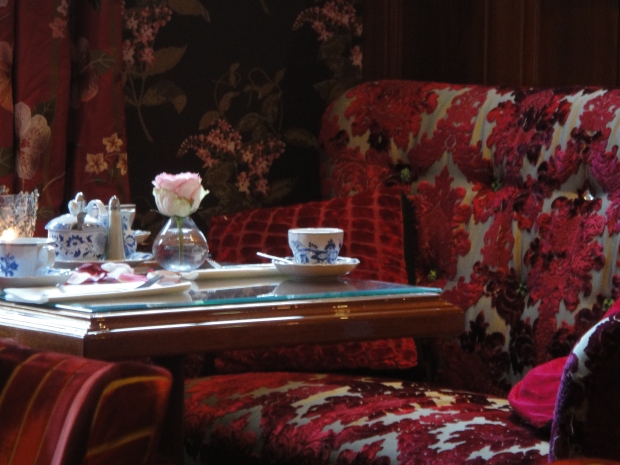 Breakfast at the Hotel Estheréa 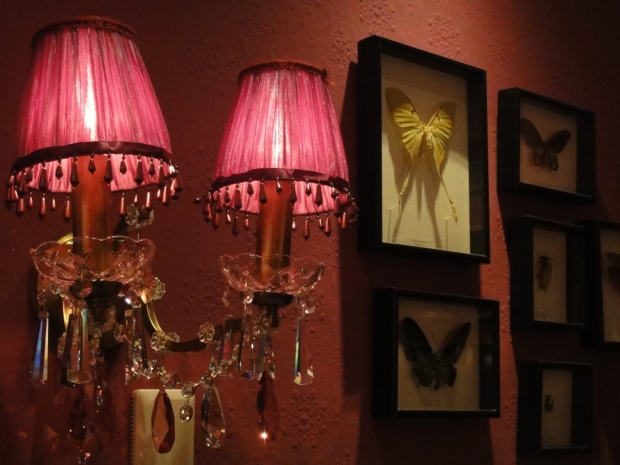 Lavish design at the Hotel Estheréa 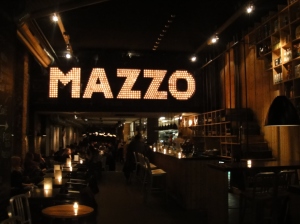 Our first restaurant, reserved on the basis of much hype by the likes of toptable, was Mazzo, the latest venture from well-known Amsterdam restauranteurs IQ Creative. Walking into the restaurant, located in the trendy Jordaan area, I was impressed. Trendy decor and a packed, young crowd spoke volumes for the restaurant’s popularity and quality. This all slipped away as we were led to the very back of the restaurant (after a 5 minutes wait for someone to serve us) where we were squeezed in between three tables containing what must have been a coach-load (or two) of tourists, a table containing a girl who kept flicking her hair in my face, and a rather large fire extinguisher. Therein followed a rather painful evening whereupon we had to wait 30 minutes to order, 30 minutes to get our starter (crostini consisting of polyester textured bread with some bottled paste scraped across it) and about 60 minutes to get our main course of plain old pasta. What was worse was waiting almost the same length of time to get a drink – waiting for food I can just about cope with, but not without a drink. 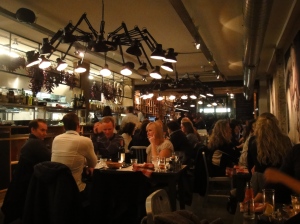 It ‘s sods law that after we were waiting for hours at Nicolas Flamel in Paris under similar circumstances back in November (crammed next to a massive group of businessmen with the result that we were virtually forgotten) the same should happen again on our first night in Amsterdam. Nonetheless, unlike at Nicolas Flamel where the excellent food made up for the lackings in service efficiency, here the same could not be said – the pasta was so ordinary, so lacking in innovation that I think I could have done better with some stir-in dolmio sauce. There was at least one benefit to all this – the food was cheap, so we didn’t feel overly disgruntled when we left – although we didn’t hang around for dessert – we would have been there until dawn. 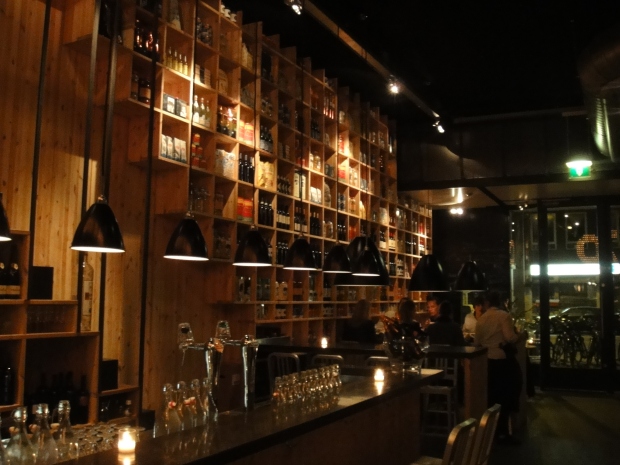 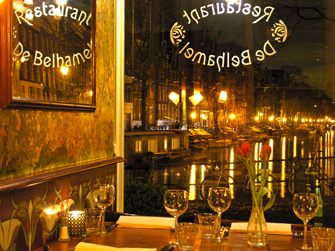 Location of the now legendary wine-glass-crashing-off-mezzanine-to-huge-personal-mortification incident (“Glass-Gate”), De Belhamel is located at the top of one of Amsterdam’s grandest residential canals with a pleasant outlook on said canal. The restaurant aspires to an art nouveau design, but ends up looking a bit dingy as a result of a very heavy wallpaper which has the appearance of mildew rather than 1900s chic. The restaurant is painfully small, particularly on the ground floor where the restaurant makes the most of the canal view by squeezing in as many tables as they can alongside the restaurant frontage. In hoping to maximise on the view, they have in fact swapped the logical front entrance to the restaurant for an entrance through the back door with the result that upon arriving at the restaurant, you are first greeted with a rather disconcerting walk through the kitchen, store rooms and god knows what else. 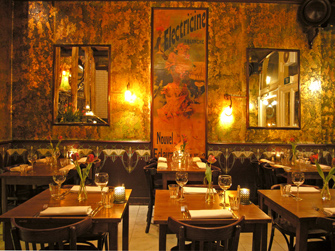 Once in the restaurant, we were given the choice of a table squeezed in with everyone else on the ground floor, or a more spacious option on the mezzanine with which we were pleased (until a couple with a dog sat on the table alongside us – and of course until my glass of wine smashed spectacularly over the balcony edge). We were pleased too with our shared started (shared to keep down the rather eye-wateringly high prices) – sautéed prawn and scallop with puff-pastry and a chive and shrimp beurre blanc – delicious. We weren’t so happy with our mains – my salmon, barely cooked – and my partner’s steak – still mooing. And this was him asking for medium. God help him if he had asked for medium-rare. They would have brought a bowl full of cow’s blood. Things were rectified with dessert though – a white chocolate cheesecake infused with ginger and possibly cinnamon – amazing, although by this point my mortification at glass-gate somewhat limited full indulgence in this chocolately joy. I would go back to taste it again, but I don’t think I could bare the humiliation. 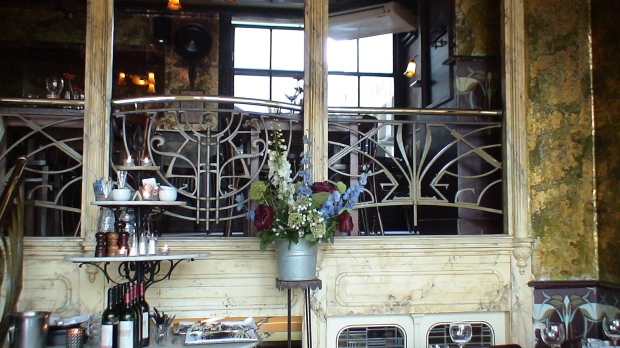 De Compagnon - on the waterfront

At last, on our final night, we enjoyed the final hurrah – a culinary experience which equalled our hotel for its superlative-deserving perfection-encompassing gastronomic delight. Attention to detail was a-flowing – waiters wearing little gloves when they placed the cutlery on the table and bread of different varieties served with rich, creamy olive oil and home-made butter. But the most attention was paid to the food which was incredibly executed with skill, finesse and flavour. We started with an amuse bouche which was a small piece of theatre – an egg yolk mixed with maple syrup and truffle in an egg cup. We thought we had finished when suddenly the waitress flipped the egg cup over, and in the base was a miniature sweet carrot crème brûlée. 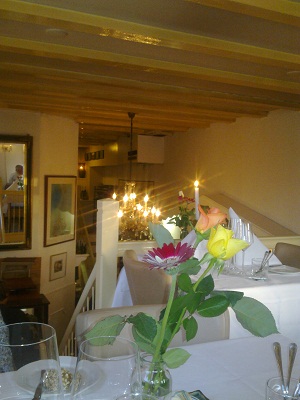 Afterwards, we opted for the €49 chef’s menu – a four course tour de force through some of the chef’s favourite dishes. And it was clear from each that he delivers his favourite things in life with tender love and care. All four dishes were immaculately turned out and artistically presented to the highest standard – I wish I could have taken photos, but one doesn’t like to look like a tourist when the waiters go to the efforts of wearing gloves to handle cutlery (I should point out that the place wasn’t pretentious – far from it – the staff were friendly and informative – like many Dutch people we came across). The first course was home-smoked salmon flakes served with beetroot cooked various ways, in a sorbet, dried, pickled and so on. The second course was scallops served with Dutch shrimps, a crap sauce and a red pepper puree with serrano ham. For mains, we enjoyed an unctuous chicken breast, soft and tender with caramelised skin, served with celeriac and truffles and even a socially daring, yet delicious, brussel sprout. Finally, the pièce de résistance – a dessert of white chocolate and orange served with various twists and variations on the theme including white chocolate infused with cloves. Oh god, it was amazing. I cannot recommend this restaurant warmly enough – and be sure to persevere when you find yourself walking past red lights, pubs and down a dodgy looking alleyway to get there – it’s well worth the perilous trek.