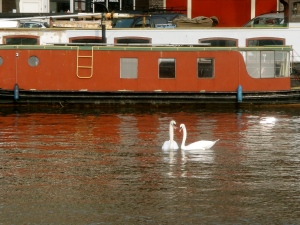 It’s my last Amsterdam post after four wonderful days in the city, and a couple of days reflection from my home in London, and probably my favourite of the bunch as I get to share with you my photographs of the trip. Amsterdam wasn’t always easy to photograph – when walking around, one is constantly wowed by the beauty of one canal after another, but what inspires at the time can be repetitive when the result is one canal shot after another. I’m hoping that in the selection I have posted, you will get to see more than just canals, although as ever, my obsession with street lamps continues throughout this bunch of photos. I only had my cybershot with me, leaving my bulkier SLR at home, but I’m pretty pleased with some of the resulting shots. It certainly wasn’t hard to be inspired by Amsterdam, even when the sun went in I was won over by beauty at every corner – so much so that it was hard not to have my camera permanently glued to my face. I will let the photos do the talking now and hope that you enjoy viewing them as much as I enjoyed taking them. Wishing you all a great weekend.

The rosy glow of the red light district

Swans tinged red by the glowing red lights of Amsterdam

Singel – the view from our hotel room

Flowers in the Hotel Estheréa

Decadent decor at the Hotel Estheréa

Chandelier at the Hotel Estheréa

Like a Vermeer painting – window at the Hotel Estheréa

Ornament at the Hotel Estheréa

Taxidermy at the Hotel Estheréa

Bilbao and Fluffy enjoy our room at the Hotel Estheréa

Wonky buildings have the appearance of stage scenery

Clogs hang in an atmospheric cafe

Cappuccino and an unctuous cinnamon muffin

Amsterdam – the city which doubles itself with canal reflections

Emblematic of Holland – the tulip

Incredible cake shop near the Rijksmuseum

Dusk over Amsterdam – viewed from our hotel room

Miserable cakes echoing my mood at the thought of going home

Statue of the Dutch Queen Beatrix astride a horse

Love was in the air in this romantic city

Opening of an emblematic bridge

Lilies at the Hotel Estheréa