Madrid-Salamanca Part IV: Not so new – Art nouveau and the towers of the Catedral Nueva 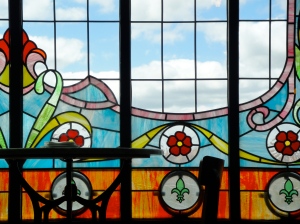 Our second full day in Salamanca took us beyond the typical university-cathedral-scallop shell-plaza mayor tourist trail to the more niche offerings of the city – such are the benefits of spending a few days in a city rather than just one, thus enabling an escape from the same old tourist faces you see cropping up at every attraction with the inevitability of a bee seeking honey. 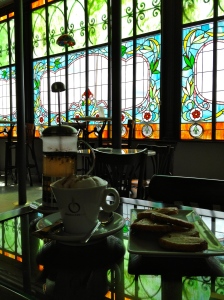 First on the list was the very unique Museo Art Nouveau y Art Deco which is an unexpected treasure set within Salamanca’s old city walls. The real stand out is the house, Casa Lis, originally a small private palace built at the beginning of the 20th Century at the request of Don Miguel de Lis, a merchant from Salamanca who was in love with Art Nouveau. The resulting house, designed by architect Don Joaquin Vargas, is a sensational crystal palace formed of multi-coloured stained glass reflected within shiny marble floors creating a kaleidoscope of rainbow luminescence as multicoloured rays of light dance a foxtrot across the palace’s polished interiors. This house rivals the very best of Barcelona, and has the sophisticated stamp of Lalique and Tiffany glass all over it. A particular highlight was undoubtedly the Café Lis, where one can sit back in the owner’s original mahogany furniture overlooking Salamanca’s Tormes River through floor-to-ceiling stained glass, sipping coffee and palmiers to a soothing soundtrack of 20s jazz.

The museum itself contains an impressive collection of decorative arts from the art deco and art nouveau era. This includes a large selection of early 20th century toys, tin toys, wind up toys and the like, characterised ornaments which play on the new social class of the bourgeoisie which emerged in the 20th century, a number of paintings by 19th and 20th century Catalan artists, and some stunning examples of sophisticated art deco figurines, as well as glassware by Laliqu and Emile Gallé.  There was also a comprehensive collection antique dolls, but I did find these to be rather freaky, dressed in their elaborate costumes, all staring out from behind their glass cases with huge glass eyes, some distinctively sinister in their stares. There is no way I would want to find myself amongst all those dolls late at night…

Next door to the Art Nouveau museum was a small exhibition to another event of the 20th Century, but one with cataclysmic results – the Spanish Civil War. The Archivo General de La Guerra Civil Española is Spain’s primary Civil War archive, and it is appropriately hosted by the city of Salamanca, centre of learning and close to the History faculty of the great University which had been a hotpot of anti-war demonstration during the Civil War years, not to mention during the Franco years, when the intellectual advancement and spirited free thinking advocated by the university proved to be a relentless thorn in Franco’s suppressive traditionalist side. The exhibition, largely focusing on civil war propaganda, was a little sparse and hodge-podge, with no central organising themes and no translations for foreign visitors. However I gather that a larger, purpose-built exhibition venue is planned for the future, something to which I look forward with a high degree of excitement. In the meantime, the archive did, rather bizarrely, contain an additional exhibition of the rules and rituals of the Freemasons. This included the recreation of a typical Masonic Lodge, the likes of which had me thinking that I had turned up in a Dan Brown novel. I’m not entirely sure how this exhibition relates to the Civil War, although, since the Freemasons were actively persecuted during Franco’s dictatorship, I’m assuming that the various Masonic articles on show were gathered up by Franco’s men.

Towers of the old cathedral

From 20th century finesse and disaster to a cathedral whose foundations were laid some 900 years before, we headed next to the medieval cathedral towers of Salamanca’s old and new cathedrals, the likes of which are entered separately (and with a separate entrance fee) from the main cathedrals. Surprisingly, the tour of the towers is not just a climb up one big spiral staircase to the top of the bell tower and down again. Rather, the tour comprises a number of exhibitions reflecting various points in the cathedral’s history such as the Lisbon earthquake some 250 years ago which caused huge damage to the fabric of both cathedrals, and a focus on Jeronimo de Perigeaux who was a key figure during the Reconquista and who, as Bishop of Salamanca in 1102, laid the foundations for the construction of Salamanca’s first cathedral.

Cracks in the Cathedral...

The age of these buildings really showed, and I was particularly amused (as well as a little scared, admittedly) by the look of fear in my Partner’s face when we noticed, upon standing on a tiny viewing balcony VERY high up in the Catedral Nueva’s interior, how many huge cracks had formed in the walls of the building and how, at various sections of the balcony, its floor and very construct appeared to slump and sag dangerously downwards. I’m pretty sure that the UK’s health and safety officers would have closed this route off some time ago.

Out alive, and after late lunch on the Plaza Mayor, our final step into Salamanca’s historical past was a visit to the Convento de las Dueñas. Much like the Convento San Esteban visited the previous day, this convent provided sustained calm and an opportunity to slow down and reflect. Its cloisters were smaller than San Estebans, but the stone masonry far more elaborate, with a multitude of cherubs and devils, angels and monsters appearing to come to life, crawling and spiraling out of the villamayor sandstone as they overlooked the cloister and reminded contemplative visitors of mortality, morality and all number of useful life lessons. 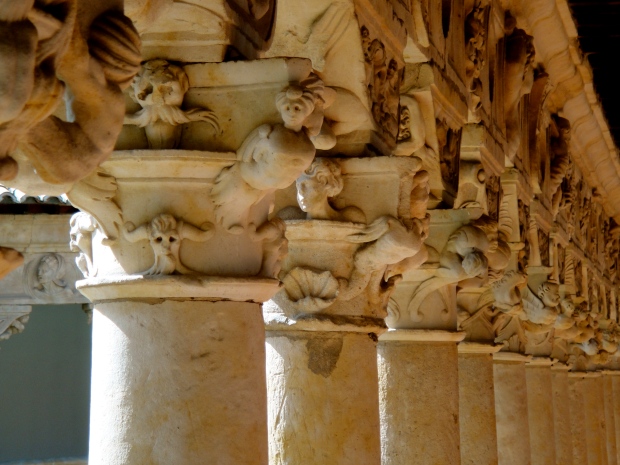 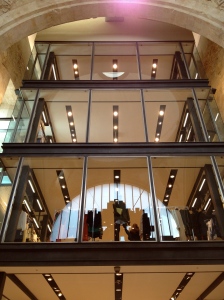 Enough of the history – now it was off to the shops for a well-needed dose of contemporary living and an escape from all that frog-based tourist tat. Our souvenir of Salamanca is a beautiful brass astronomy globe which reflects Salamanca as a centre of learning and will fit in perfectly with my vintage-chic theme at home. But even as we wandered from Zara, to Massimo Dutti, to H&M and all the other high street shops, we noticed how the historical character of Salamanca continues to infiltrate into the city’s contemporary life – Salamanca’s chain of Zara is a perfect example, comprising a multi-floored glass box, floating in the shell of a vast old church. But where an altar once stood, a catwalk of mannequins showcasing Zara’s latest collection now stands. Is this a savage misuse of a sacred place or testament to the role of religion in modern day society? I like to think of it as the preservation of history for the greater benefit of contemporary society and future generations. Even as a clothes shop, history looks great. And as a monument to a multi-layered historical and cultural matrix, Salamanca is surely King.