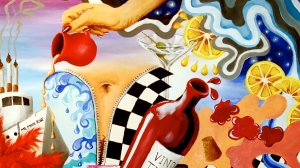 The sun is shining in London, the olympic torch is gradually winding its way around the country to rapturous applause, and the nation is decking its streets in union jacks in anticipation of the Diamond Jubilee celebrations next weekend (you notice I’ve ignore the slight blip that was eurovision last night, when the UK came second from bottom in the results table – but no surprises there, it only goes to emphasise our disconnection from continental europe). So with spirits high, and with what looks like the arrival of summer (finally!) I have decided to showcase a triptych of paintings which I completed when the times were good, the sun was shining, and I was enjoying uninhibited zest for life. I was holidaying in Marbella, Spain at the time. I had just finished my law degree, and was spending almost a month in Spain. By day I would enjoy the freshness of the mediterranean sea, the heat of the beach, and the pleasure of seafood and of wine. In the balmy afternoons, I would retreat to our sun-dappled garden, under the shade of our fragrant jasmine tree, and rest, contemplate, and (being english, even when in Spain) drink tea. 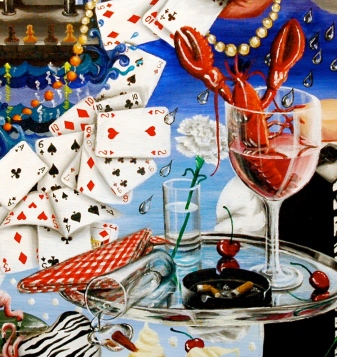 It was in these times of ultimate afternoon delight that the Joie de Vivre triptych was born, three paintings which were unplanned, but which burst freely out of my paintbrush and straight onto canvas, an apt demonstration of my uninhibited happiness when life was good, the drinks flowed, the sea lapped upon the shore and my imagination came to life.

The resulting triptych sold at my 2006 exhibition, Between me and my Reflection and is now one of my best selling limited edition prints (with some still for sale on my Etsy store). It celebrates the ‘zest’ or joys of life through an illustration of the three stages of culinary and alcoholic indulgence during the day; lunchtime, afternoon tea and evening. Recreation and hedonism are central to the juxtaposed images with a further emphasis on home entertainment, namely piano/music, cards/gambling and chess. 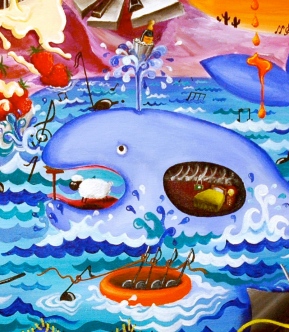 Opulence is illustrated by symbols of extravagance contained within all three images, as well as buried treasure and jewellery. Sea food is the culinary indulgence on the menu: many other life-forms or objects are anthropomorphised, for example, the sheep seen in the domestic setting of its whale-house, the musical notes struggling to save each other from the perils of a rough sea, and a snail which digs underground to retrieve the buried treasure. The ‘zest of life’ which these images embody is also specifically reflected by the citrus slices which radiate perfect weather conditions in each scene, while a human hand is always “on hand” to assist in the activities being illustrated, whether it be pouring the cream for the afternoon’s strawberries and the marie-rose sauce for the crab, or dealing out the cards for an evening of casino entertainment. The painted images flow and metamorphose from one object to another, as a string harbour-side lights becomes a string of pearls which in turn  becomes of floating buoys or a sudden rain shower becomes ice cream, piled on a cone to be enjoyed with a glass of rosé.

There’s a lot to explore in these paintings, which are typical of what happens when I set my mind loose, so without further ado I will let you enjoy the paintings in full, hoping that you take from them the optimism for life which they engender as you go about enjoying your sunny sunday and forthcoming summer. 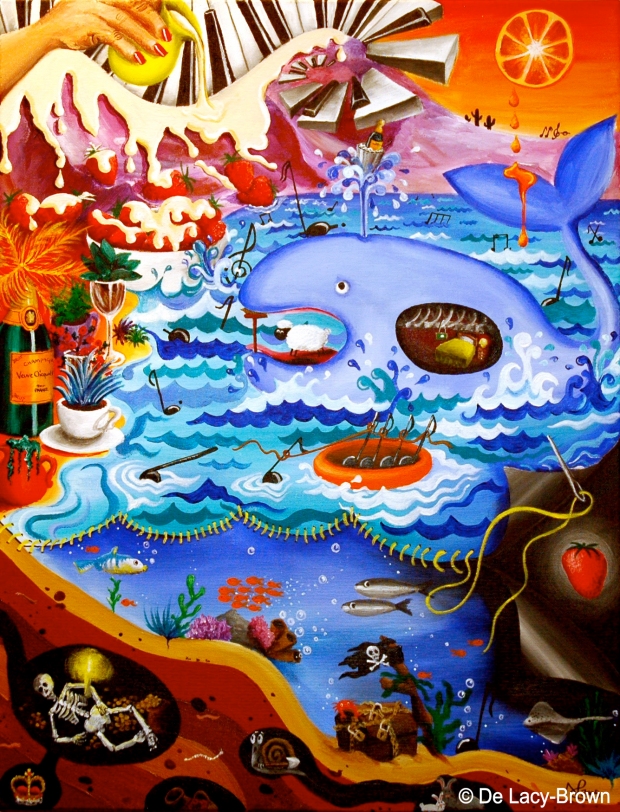