Duck & Waffle – a combination worth climbing 40 floors for

There are restaurants, and then there are Restaurants. You have your bog-standard local, great for a catch-up with friends, a quick snack when lunching alone, or a dinner when you really can’t be bothered to cook. But then there are the Restaurants – the crème de la crème of gastronomic performance, where a reservation is a date with the chef, a ticket at food theatre, or a seat in a location which dazzles like a cinematic display of visual glory. It was to one such gastronomically glorious location that I headed at the weekend, in celebration of my partner’s 30th birthday, which clearly called for something special. And where does one go to celebrate such a magnificent (if not daunting!) event, to mark the ascension to the ripe old years of proper, responsible adulthood? Why, I could think of no better than to ascend the dizzying heights of London’s newest skyscraper: The Heron, upon which, at the dazzling 40th floor, sits the Duck & Waffle restaurant, in a supper sleek, panorama-spectacular glass cube all of its own. 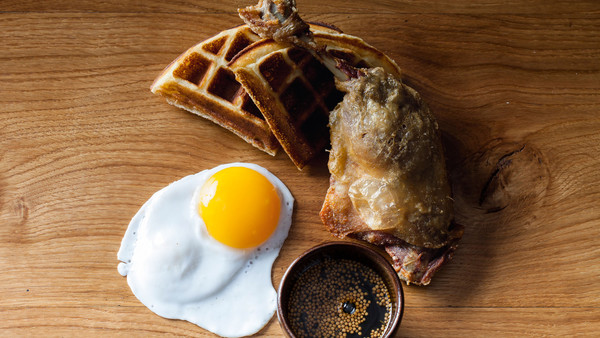 This was a super-exciting event. I’d kept the reservation a secret, but knew nothing of the restaurant itself except that the views promised to be nothing short of spectacular. So ascending from Liverpool Street station, and catching my first glimpse of the heroically high tower which was to be the location of our dinner made for quite an eye-full. As we passed the foot of the huge glass tower, and saw within the main foyer a fish tank bigger than my entire flat, I knew that we were in for a treat. And soon, thereafter, did my partner, as I took a sharp turn into the building that was to be the host of his birthday treat, and we ascended, at super-sonic pace, all 40 floors up to the restaurant. The speed not only made our stomach’s lurch, but the visual spectacle as street turned to streets and district turned to entire glittering city struck us both pretty dumb with awe. Almost shaking as we reached the top, I managed to vocalise the name of our reservation, before we passed through a bar, where a plummeting orange glass spiral staircase overlooked (yes, that’s overlooked) the shorter Gherkin tower to stunning effect, and into the restaurant.

Most tables benefit from the great view

The restaurant is surrounded on three sides by an unbeatable panorama which extends so far over London that the horizon blurs with the sky and all you can see is a galaxy of twinkles. From our beautiful window-side table, we looked straight onto the Gherkin, and beyond Tower Bridge, under which the Thames snaked its way towards the towers of Canary Wharf from where the view grew misty. In fact by dessert the whole view had gone rather misty – I think we may have found ourselves in a cloud. Anyway, I digress. The interior is funky and modern, with a golden yellow ceiling which appears to be rippling, and an open kitchen which allows you to check out what the busy chefs are up to.

Our view with chef reflected 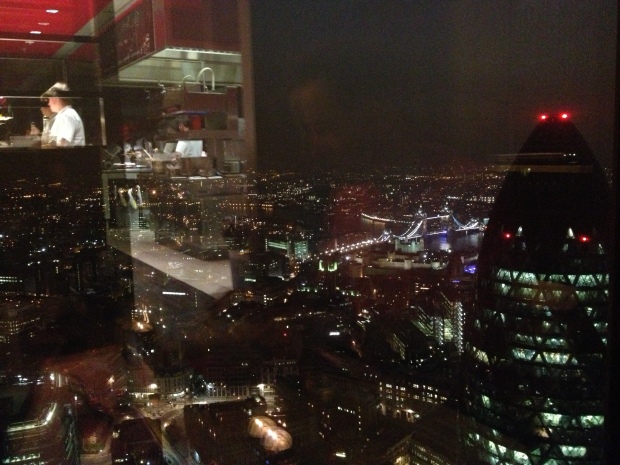 The great thing about the restaurant is that for the views, it’s very unpretentious. The menu is even affordable, and the whole outfit is quite casual and trendy. The food is served in a tapas style – the intention is to share dishes which range from snack-sized bites, sushi-style raw fish and a range of mediterranean breads, to cold cuts and speciality mains including the restaurant namesake, duck and waffle. The dishes then come as and when they are ready which, in our case, was sequenced pretty much in size order starting with the snacks, bread and raw fish and ending with the duck. 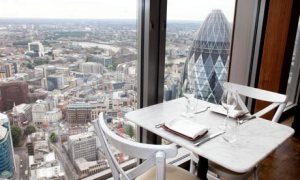 We went for 6 dishes spread from across the menu. We started with dates wrapped in bacon with a creamy mustard side sauce – the flavours were so good I could have eaten a whole basket full of these things. From the breads, we went for a garlic and rosemary foccacia. The smells immediately transported us to Italy’s mediterranean coast, and the flavours were deliciously pungent and well seasoned, although the bread itself was a bit doughy in the middle. Onto the raw fish – exquisite strips of tuna, served with a small cube of watermelon, a tiny basil leaf and drizzled with a balsamic glaze which made for a perfect balance of flavour. As ever, the aromatic basil won me over as it does in most food combinations.

Onto the slightly bigger choices, we had a sizzling baked golden beetroot dish which was accompanied by creamy goat’s curd and honeycomb – so good, although the delicious honeycomb did tend to cling onto my teeth with unnecessary enthusiasm. We also had a deliciously spanish octopus cooked with chorizo. However the best dish of all had to be the trademark duck and waffle. Oh my goodness, the very thought of that dish makes me salivate like the Niagara Falls. A Belgian-style waffle was topped with an unctuous leg of duck and a gooey fried egg, over which one poured (to taste) an ambrosial syrupy nectar which appeared to be maple syrup with mustard seeds giving a slightly fiery, textured edge. The dish was so delicious, and the syrup so exquisitely sinful that I actually ended up drinking the residual syrup straight from the jug (no one was looking!). I would walk the 40 floors to get to that dish if I had to! 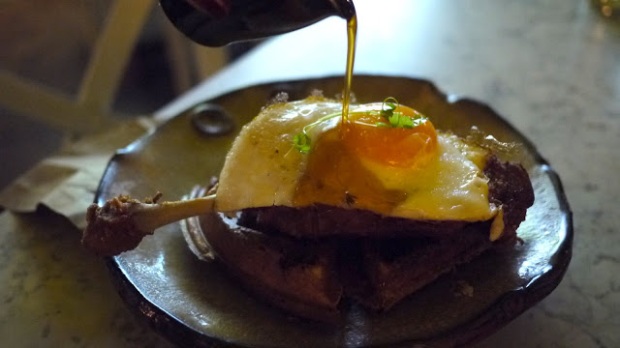 The famous duck and waffle

We ended our evening with two selections from a great dessert choice. My partner had gooey chocolate brownies, again with honeycomb and peanut butter icecream. I had a spiced pear “cappuccino” which was a pear syrup and froth, spiced, with chunks of pear and gingerbread – very festive and just about appropriate as it was the 12th day of Christmas. 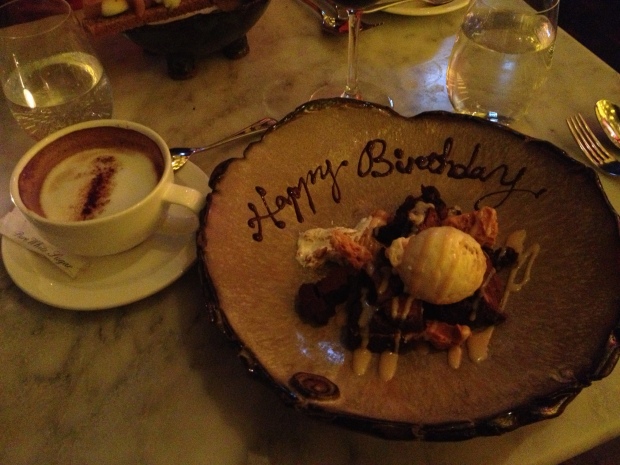 And so ended our fantastic night. This restaurant is a must for those who love a good view. It is simply mind-blowing. The food is not overly expensive, although it can mount up if you have too many dishes (which is the temptation – the portions aren’t that large). The wines are expensive though. The cheapest bottle of red I could find was £40 so we opted for a couple of glasses instead. The main drawback for me was the fact that the open kitchen was very smoky. The aromas of all the cooking, grilling and frying were very cloying in the air which is not ideal for an enclosed glass space – like frying bacon inside a hot greenhouse. This left us smelling quite heavily of fried food when we left. But we weren’t overly bothered. That view will stay with us for much longer, and as for the lift journey down, we took the lift up and down about 3 times – it was like a fairground ride with the best ever view – priceless!

It was a long way up…

The staircase in the bar – check out the gherkin outside

Details of the Duck & Waffle can be found here. Allegedly they’re open 24/7 so if you ever happen to be strolling through the city at 3am (which won’t be such a novelty for the city lawyers I know) that syrupy duck treat will lift your spirits in no time.

Tags: Duck & Waffle, food, London, Restaurant
From: Food
← On the Twelfth day of Christmas, my Normy gave to me…
Polpo by Polpo →
7 Comments Post a comment