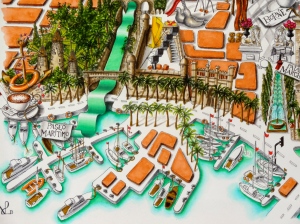 If I thought the first of my Mallorca maps was a complex undertaking, with its representation of iconic Mallorca filled with the towns and terrain that characterise that Mediterranean gem of an island, then things weren’t going to get any easier when it came to commencing the second of the two commissions undertaken for Cappuccino Grand Cafe this Summer. This time round it was the capital city of Mallorca (and the Balearics) Palma de Mallorca which needed to be put on the map, as it were, a requisite for Cappuccino’s Mallorcan representation, seeing as the popular café chain has some 5 restaurants and two takeaway branches in the city alone.

But quite asides from illustrating the cafés characteristically prime locations, the real dilemma for me, when I set about designing the map, was how best to represent the stunning city of Palma in all its architectural and nautical glory, while ensuring that the illustrations of the Cappuccino cafes did not become overshadowed. My solution was to focus on the areas and the architecture which makes the locations of the Cappuccino cafés so desirable, contributing inexorably to the simple joys of visiting one of their branches, sipping a coffee in the vicinity of the ancient Palau March for example, or overlooking Palma’s yacht-crammed marina; and to otherwise reflect the great mass of this sprawling city with simplified terracotta blocks, these hinting at the architectural maturity of the city, while also resembling the terracotta floors which are characteristic of the Med. However, I suppose the pièce de résistance of the map for me is my representation of the River Borne, cutting through the Western half of the city as it makes its way down to the marina beyond. I could not resist the temptation to give this map a surreal twist, lifting the river like a satin ribbon, out of its river bank, undulating and flapping through the air as it approaches the sea.

Cafes in the Borne and Palau March

The Cappuccino HQ at San MIguel

The result of all this is a map which must surely represent a satisfying climax of my Balearic maps, and one whose result is the self-evident result of hours of laborious and detailed work. But with Mallorca, Ibiza and Palma under my belt, the question has to be: where will my map making take me next? With their capacity to capture the essence and character of a place, while reflecting the topography and geography of a location, I have now realised the potential that a map can have for artistic illustration, while reflecting an accurate representation of location and terrain – and frankly, I cannot wait to explore the medium further.

Detail of the cathedral 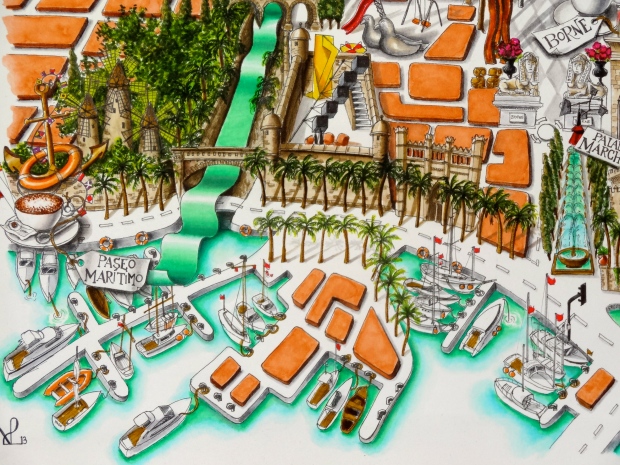 Detail of the Marina and the River Borne 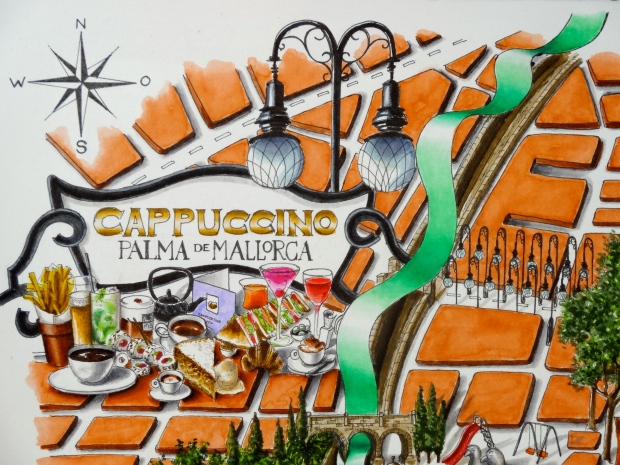 Detail of the Cathedral roof and nearby arab baths

Detail of the Es Baluard museum of contemporary art

You can see all of my Balearic maps in the Cappuccino Grand Papier, available online, and in everyone of the cafés irresistibly indulgent branches. What other excuse do you need for a weekend in the sun?