The Norm Nativity | Visit of the Three Wise Norms

The Shepherd Norms weren’t the only Norms heading towards the stable in Bethlehem. Three exceptionally wise Norms who each in turn lorded over little glittering neighbouring kingdoms in Eastern Normland had heard about the birth of a new King of Kings, a Norm to save all of the world, and decided that it was only right and proper that they visit this future great Norm a visit. And how to find this little Norm who had been born in a mere stable without an address? Well luckily an ever brightening star had appeared before their path, and guessing that the star was acting as a kind of celestial guide towards their destination, the three Wise Norms followed the star towards Jesus Norm.

The only problem was that the star kept on moving, and as it did so took the Wise Norms over fields and mountains, rocky plains and wide expanses of perilous sandy desert. Luckily they were not on foot, travelling instead upon the seated humps of their trusty camels, ensuring that not only their lavish persons remained clean and unweathered by the journey, but also that their presents of Gold, Frankincense and Myrrh remained safely installed above all of the sandy terrain. Let’s hope they make it to Bethlehem safely… 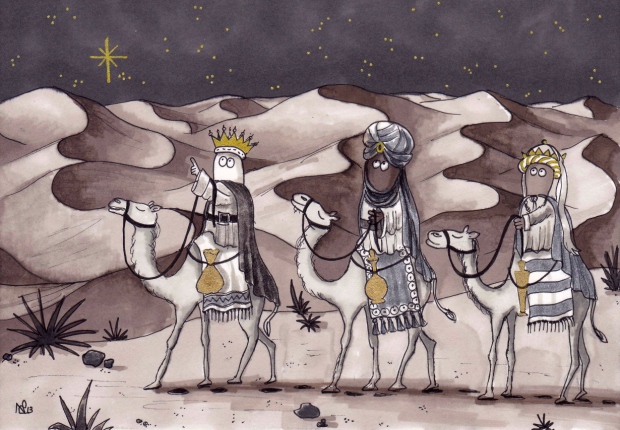 Come back next time, to see where both the Wise Norms and the Shepherd Norms ended up! In the meantime, here is Matthew’s account of the Magi’s visit, the only one of the gospels to mention it.

In the time of King Herod, after Jesus was born in Bethlehem of Judea, wise men from the East came to Jerusalem, asking, “Where is the child who has been born king of the Jews? For we observed his star at its rising, and have come to pay him homage.” When King Herod heard this, he was frightened and all Jerusalem with him; and calling together all the chief priests and scribes of the people, he inquired of them where the Messiah was to be born. They told him, “In Bethlehem of Judea; for so it has been written by the prophet: ‘And you, Bethlehem, in the land of Judah, are by no means least among the rulers of Judah; for from you shall come a ruler who is to shepherd my people Israel.'” Then Herod secretly called for the wise men and learned from them the exact time when the star had appeared. Then he sent them to Bethlehem, saying, “Go and search diligently for the child; and when you have found him, bring me word so that I may also go and pay him homage.” When they had heard the king, they set out; and there, ahead of them, went the star that they had seen at its rising, until it stopped over the place where the child was. When they saw that the star had stopped, they were overwhelmed with joy. On entering the house, they saw the child with Mary his mother; and they knelt down and paid him homage. Then, opening their treasure chests, they offered him gifts of gold, frankincense, and myrrh. And having been warned in a dream not to return to Herod, they left for their own country by another path.