I have decided to begin the narrative of my recent adventures in Venice, Rome and Naples at Christmas by sharing a few of the paintings I created when I last visited the watery paradise of Venezia in 2007. Painting 5 works in all, 2 of which are featured today, I was drawn, as so many of the best artists have been before me (Turner, Monet, Manet, Canaletto, Whistler, Seurat to name but a few…) to reflect upon the very unique face of a city which simply has no rival elsewhere in the world.

With its liquid reflections doubling up the views of every street, every palazzo and every church; it’s unique style of gothic architecture creating elegant lattice-like facades; it’s canals filled with stripy gondoliers and the elegant gondolas themselves; and for all its magnificent statues and pink lamps and bridges and art-stuffed churches, Venice is just a gift for artists. 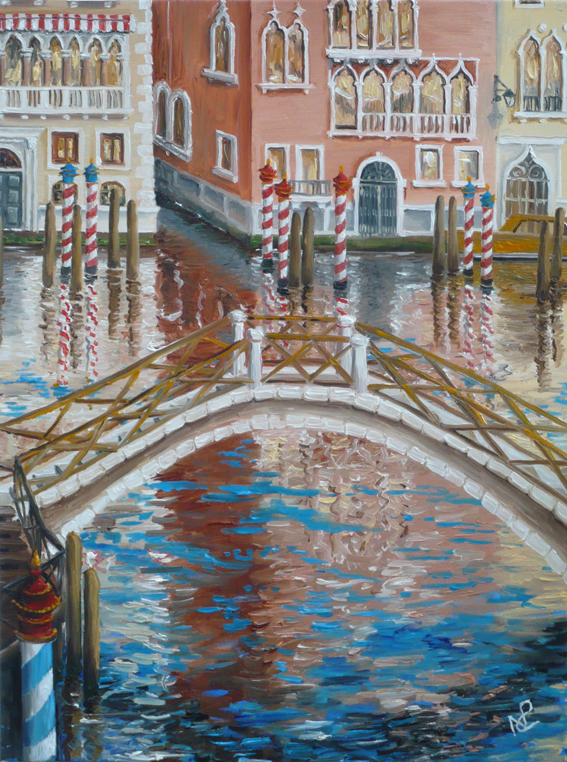 When I last went to the city I came back, somewhat predictably, with a whole pile of photos which then inspired me to turn my hand to painting. These first two canvases focus on two typical Venetian views, both based on a series of photos I took of the Grand Canal. While I look back on these works now and see some degree of naivety in their finish, you can see how fascinated I was with the watery ripples which cast an abstract reimagining in every Venice reflection, as well as with the renowned elegance of those great Grand Canal Palazzos and the gondolas that float onwards before them.

For all the criticism I could give these old works now, someone must have liked them – I sold them both shortly after their completion!

More Venice ahead – so join me soon on The Daily Norm!