Venice: My paintings (Part 3) – The Rialto

As The Daily Norm waves goodbye to Venice (for now at least – I feel the need to return in warmer climes to capture the city endowed by blue skies and glittering sunshine), I thought it an appropriate time to share two artistic reflections on the city’s grand canal with you, both created by my own fair hand.

The first piece is a painting which marked the climax of my small Venice series of paintings, the previous four of which I have already shared with you in previous posts. More akin to a traditional Canaletto style of work, I painted this reflection on the grand central canal of Venice shortly after visiting the city in 2007. This painting is not so much about the ripples or the details of the buildings or gondolas, but about the grandeur and beauty of the city when considered from one of its most popular viewpoints –here from atop the famous Rialto Bridge.

I was so pleased with the finish of this work – the effect of light on the water in these dying hours of a sunny winter’s day in the city. The work, which I painted in oil on canvas, was sold shortly after completion, and now hangs in a solicitors firm in Sussex.

Meanwhile, talking of the Rialto Bridge, I thought I would also return to another of my works, albeit this time one of my Norm sketches completed in a completely different style and medium – this time in pen and ink on paper. This small sketch was completed in 2012 as part of a series of Italy Norm sketches which included Rome, Florence, Pisa, the Vatican and Sicily, and the original can now be found hanging in a small town by the Mediterranean sea in Tuscany along with the rest of the series. The sketch, which shows Norm tourists and gondoliers alike slowly ambling along the Grand Canal under the architecturally renowned Rialto Bridge, was originally featured on this blog in July 2012 – but 18 months on, I think it’s only right that it gets a good airing. 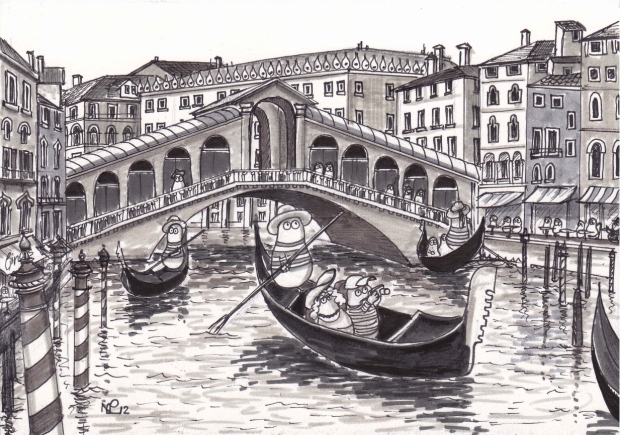 My head is now filled with the prospect of new Venetian paintings – hopefully I’ll be featuring one on The Daily Norm soon!