My Barcelona, on canvas: Separatism 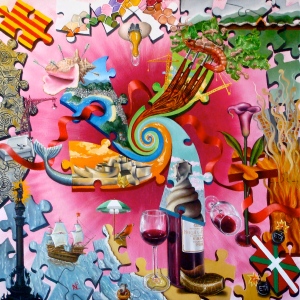 While last week I shared with you one of my more sedate paintings of Barcelona – an oil landscape of the Port Vell – this week, as the tales of my recent Barcelona travels draw to a close, it’s inevitably time to share the second of my two paintings featuring Barcelona – and this time it’s a far more vibrant affair. Part III of my España Volver series, Separatism, explored the fragmentation and political division which is shared by two autonomous regions of Spain, the Basque Country and Catalunya (Catalonia), both of which have a historically fractious relationship with the Spanish nation to whom they are, for some unwittingly, part of a national whole.

By way of demonstration of the political and social fragmentation which means that these two regions sit so uneasily with the rest of Spain, the symbols painted across my painting are framed in the shapes of a jigsaw puzzle which, rather than fitting together easily, is in part broken and displaced. Emerging out of and contained within the pieces of the puzzle are a series of images representing the shared values and passions of the region – food, wine, art and maritime history, as well as icons that are unique to the regions. So out of the Basque Country comes Frank Gehry’s famous Guggenheim building, while in Barcelona, the capital of Catalunya, we have Gehry’s magnificent beachside Peix fish.

Representing the Basque town of Saint Sebastian, I have painted a conch shell pierced by arrows (St. Seb’s bay is known as La Concha because of its curving shape), while Gaudi’s iconic Sagrada Familia takes centre stage in this painting, with a dual purpose as a fork on which a juicy salsa drizzled prawn is poised; symbol of the gastronomic prowess of both regions. Meanwhile, further reference to Catalunya’s artistic prowess is made in the broken egg, representing Catalunya born Salvador Dali, while around the canvas, various symbols of Gaudi are represented, from his Passeig de Gracia paving slabs on the left, to the Casa Mila chimney which emerges atop of a bottle of fine Rioja wine.

Of course there’s violence too, with an illustration of the ETA bombings over on the right; symbol of the violent means which some separatist idealist have gone to to make their point, as well as the spiralling energetic core of the painting – a further demonstration of the plethora of cultural, social and historical influences which have made the regions as richly divergent as they are today.

And for those of you who would like to see this painting closer at hand, it will be on exhibition, along with the rest of my España Volver series at London’s Strand Gallery between 13-18 May. More details can be found here.

Tags: Art, Barcelona, Basque Country, Catalonia, Nicholas De Lacy-Brown, Oil on canvas, Spain
From: Art, Barcelona, My Art
← Barcelona | Day 3: Up, over and out
Norms boating at the Parc de la Ciutadella →
No comments yet