My Barcelona, on canvas: Port Vell

Back in 2007, when I had finished 5 years of full time legal studies and was waiting for my professional training to begin, I decided to take advantage of having a certain amount of time on my hands both to travel as much as possible, and to teach myself how to paint in oils (having thus far painted largely in acrylic). The two things inevitably combined, and having travelled to a few cities in Spain and beyond when venturing to and from my family home in Marbella, I decided to test out the results I could achieve in oil paint by working on a series of cityscapes and landscapes based on those travels. You saw my Venice paintings which I worked on around this time. Having mastered that watery city, I decided to move on to a series of seaside cities, and Barcelona was top of my list.

It was therefore as part of that series that I painted this work of the Port Vell. As yesterday’s post showed, Port Vell is part of the expansive marina and beach which now provides Barcelona with a beautiful Mediterranean facade where previously (pre-1992 Olympics) there was only a heavily industrialised port. Being filled with yachts of many shapes and sizes, this painting would have been a challenge for the most seasoned of oil painters, but for me, a mere beginner, it presented even more of a challenge. I was nevertheless pleased with the resulting work, which captures, I think, something of the compact collection of yachts which fill Barcelona’s marina, as well as illustrating something of a transitional weather effect as the sun begins to shine from under the passage of a thick layer of grey cloud. 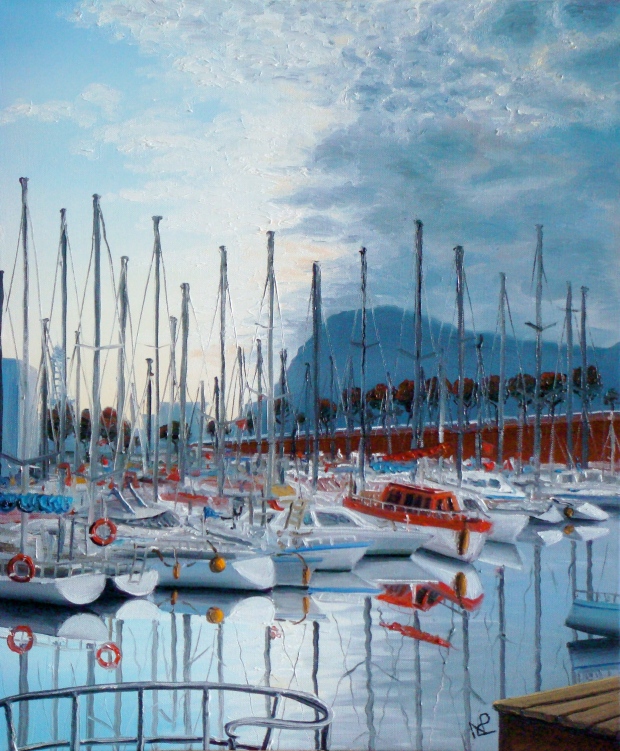 Strangely, despite making 7 visits to the city, I have only painted Barcelona twice. While I’ll give you a glimpse of the second work sometime soon, I think that further Barcelona creations are somewhat begging. Watch this space.