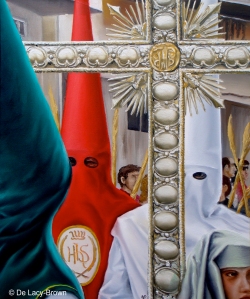 It’s Palm Sunday and all over the world, people will be marking the start of Easter Week. I’m not that religious myself (I went to Catholic school and sung in a church choir throughout my childhood, but that’s probably the extent of it), but there is something undeniably enchanting about the celebrations which are afoot in the Christian church at this time of year, especially in Southern Spain.

In celebrating Semana Santa, the Spanish go all out in a devotional show which makes the spine tingle with its emotional impact. Every evening in Spanish towns and cities throughout the country, but particularly in the South, brotherhoods (hermanidades) of various churches dust off the various statues of Jesus and Mary which usually sit in the enclaves and side chapels of their churches, dress them up in flowers and candles, and with great fanfare parade these statues upon gilded tronos around the streets of their respective cities. The hermanidades themselves are likely to parade as nazareños, the slightly sinister masked figures who accompany the floats, with their pointed conical hats carrying candles which sway to the rhythm of the parade. Seeing row upon row of these figures lined up in the street is a moving and dramatic sight.

My first ever experience of one of the Semana Santa parades was in my (sometimes) hometown of Marbella on palm sunday. Decked in rich velvet costumes of red, green and white, the nazareños carrying their heavily decorated silver and gold crosses and candlesticks completely inspired me, and I painted this quick oil painting named after the day of the parade which inspired it – Domingo de Ramos.

Of course those who know my art will know that this is but one artwork which has been inspired by the moving spectacle of Spanish Semana Santa, but as it depicts Palm Sunday, it seemed only appropriate to share it with you today.

And if you like my artwork, don’t forget that all of my Spain-inspired paintings will be on display at my forthcoming exhibition, When (S)pain became the Norm, starting one month today!