We had been some time on Italy’s stunning Amalfi Coast before we actually visited the town of Amalfi itself. Or perhaps I should call it a city, for Amalfi is a place rich in maritime history left over from a time when it was as important on the trading map as Venice and Genoa. Today however it is a mere shadow of its former glory – small in size and population, but still retaining all the highlights of its historical magnificence.

We set out to Amalfi one stormy morning from Positano, after a night when humid thunderstorms had tried to break through the sauna of heat clinging to the mountain sides down by the sea. However within the 45 minutes of our boat journey along the coast, the clouds were already rolling away, and the arrival of the sun coincided perfectly with our arrival into Amalfi, it’s magnificent gold tiled Duomo reflecting the sun like a lone diamond and glinting visibly all the way out to sea. 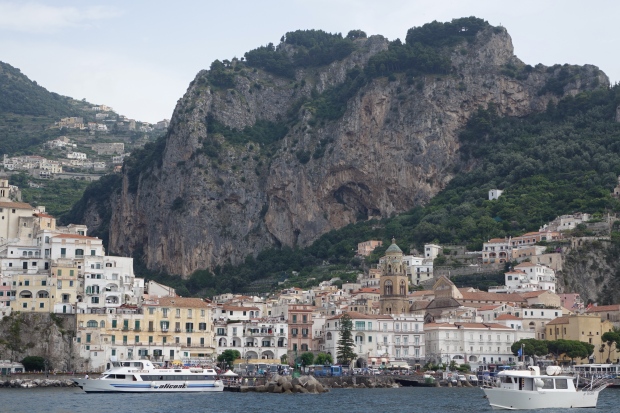 As the boat docked on Amalfi’s busy quayside it was already obvious that the town had a much more tangibly urban feel than little Positano. Along the seafront, larger ornate apartment blocks stood proudly like the kind usually found in Rome or Naples; in its port boats glided in and out with greater regularity and purposefulness; and in its squares, crowds bustled in a way which inferred that real life was going on here, as well as tourism.

The streets of Amalfi 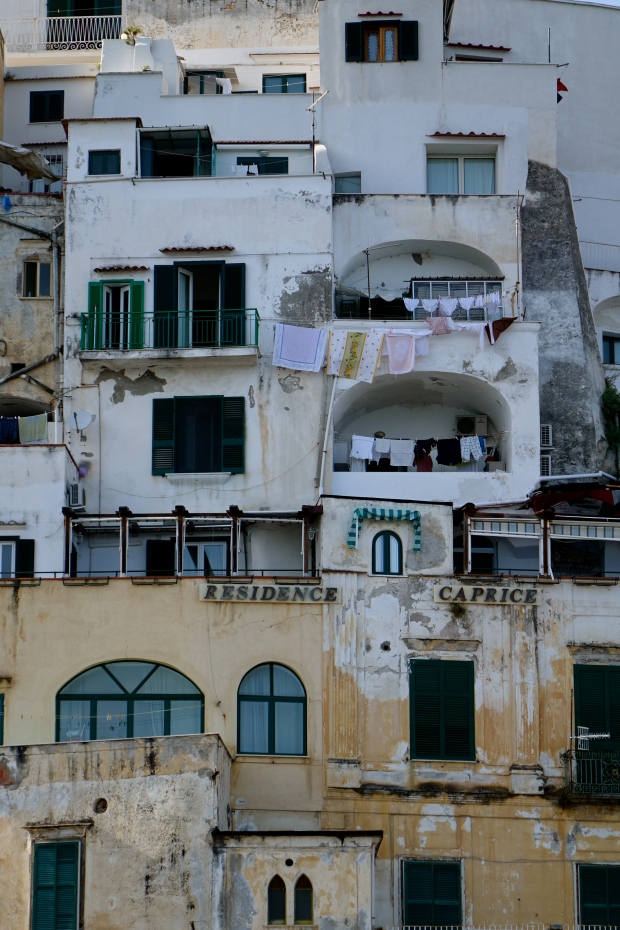 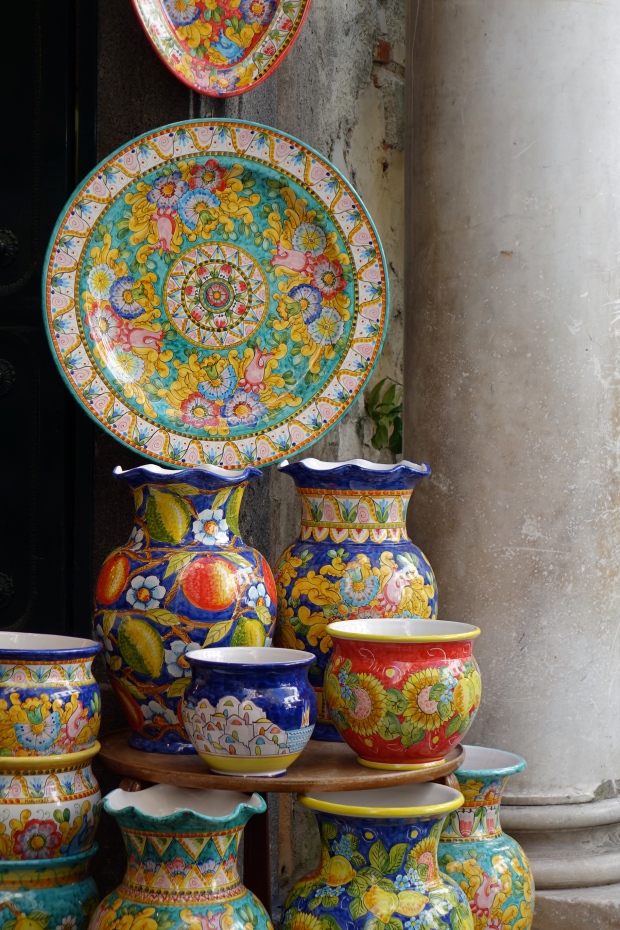 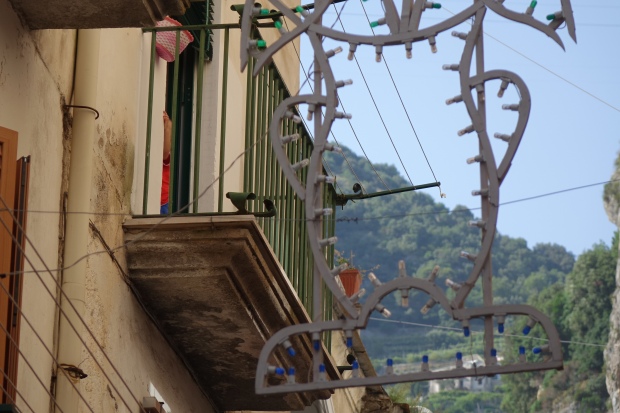 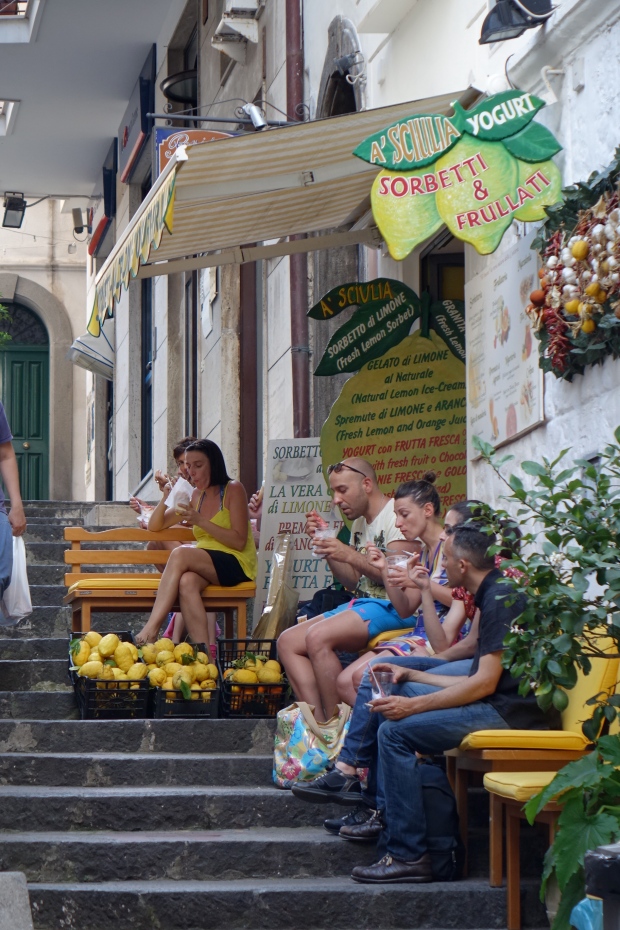 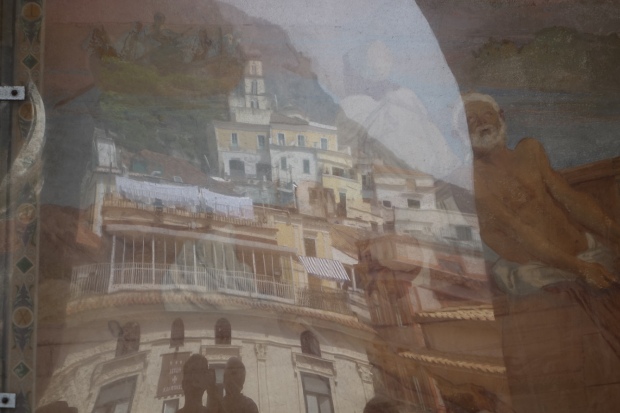 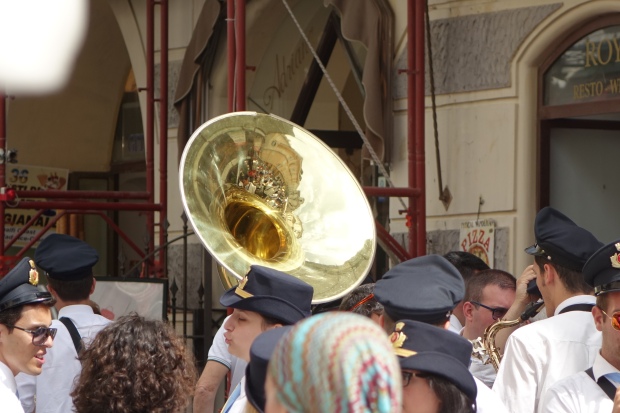 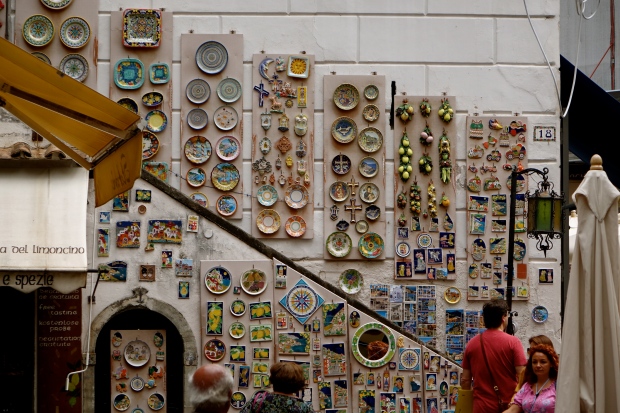 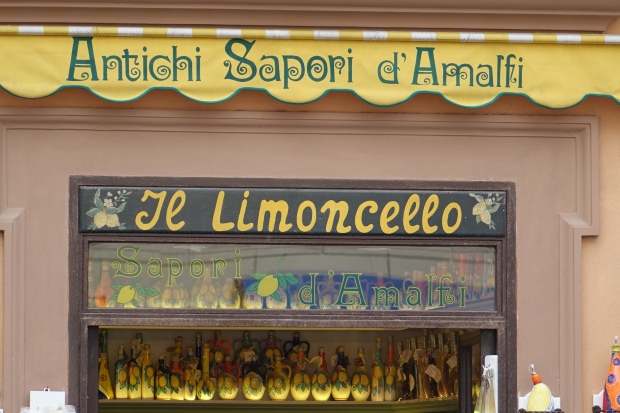 Amalfi is not a huge place, although it’s gently crumbling historical streets lined with packed shops unfurling onto the roads like in Naples make for an indisputably enjoyable wander. But the real star of the show is undoubtedly the Duomo, Amalfi’s stunning cathedral, sat atop a grand ascent of stairs and glittering from the polished marble and ravishing mosaic details of its facade. Looking like a cross between the candy-striped marble churches of Florence, and the more Byzantine offerings of Turkey and around, Amalfi’s Duomo offers a brilliantly complex facade comprising twisted gothic columns, multicoloured marble, a beautifully detailed mosaic depiction of Christ, and vast bronze doors dating back to the 11th century. And all this is partnered perfectly by the elaborate campanile next door, whose cupola, like so many local churches, is finished with gleaming ceramic tiles. 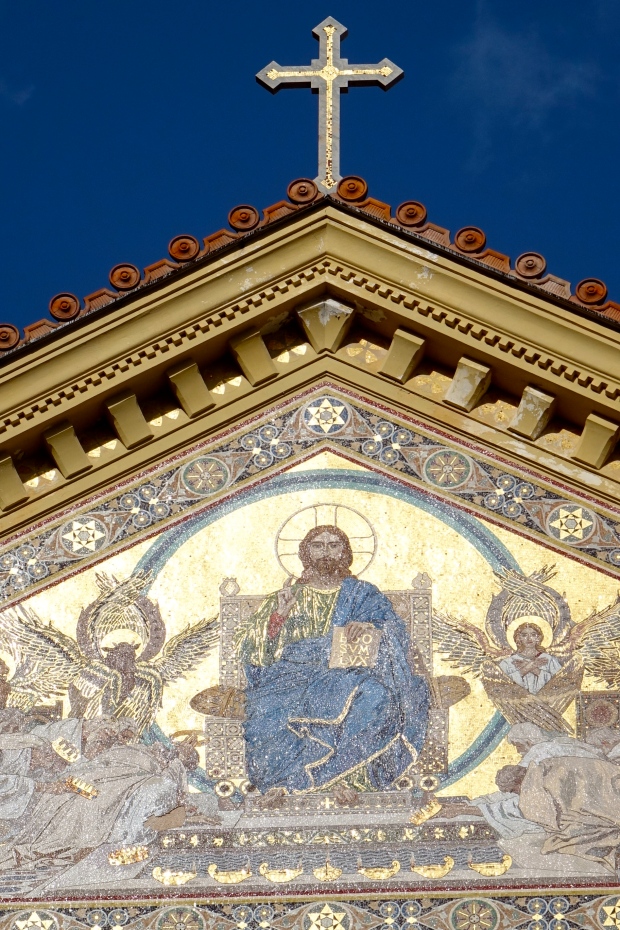 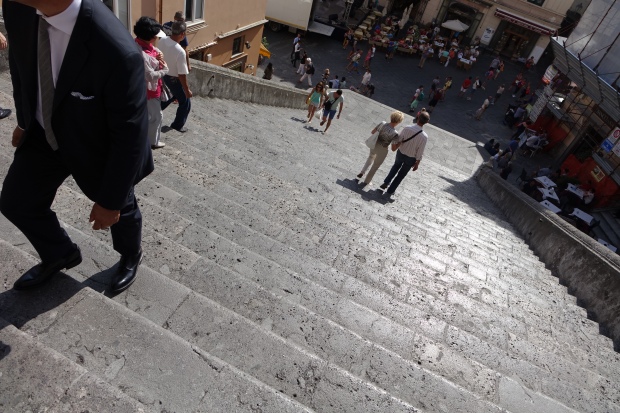 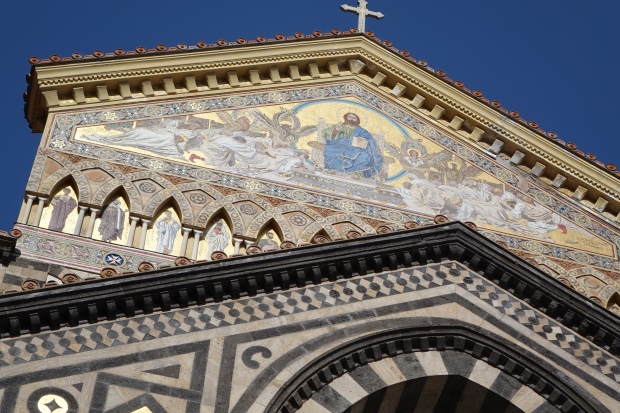 All this we were able to take in over a coffee, and later a glass of chilled wine sitting at one of several perfectly positioned cafes in the Piazza del Duomo at the foot of those steps. We even saw a beautiful bride ascending the stairs for her wedding – could there be a better location for such an event? 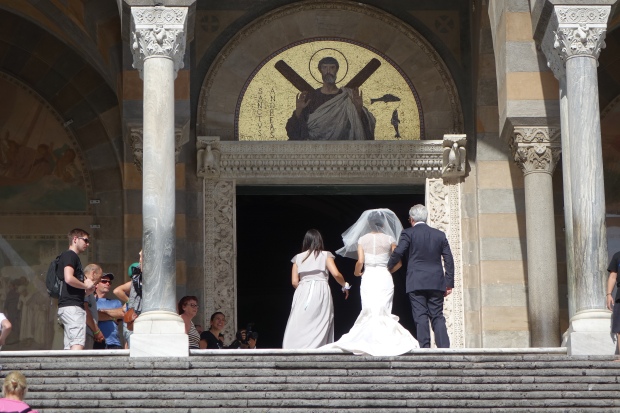 Meanwhile, inside the cathedral there is as much visual tantalisation on offer as on the facade. In the so called Chiostro del Paradiso, multiple interlaced white arches set amongst palms give this delightful space a very Arab feel, while down in the lavishly decorated crypt, Amalfi hosts the body (minus head) of St Andrew the Apostle amidst all of the pomp and extravagance that one would expect for such a coup on the saint front.

The Cathedral, inside and out 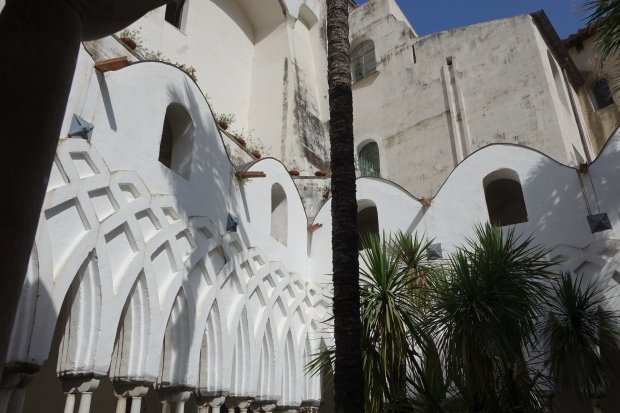 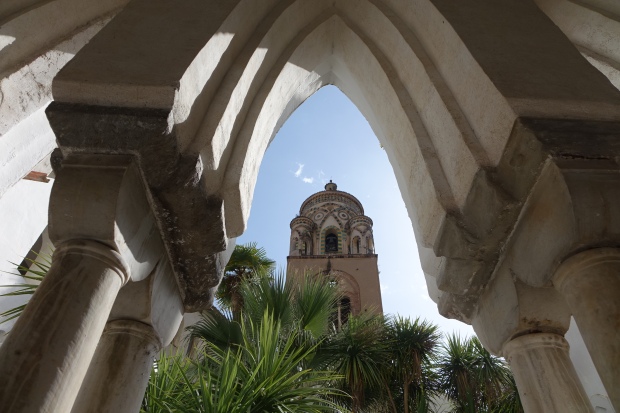 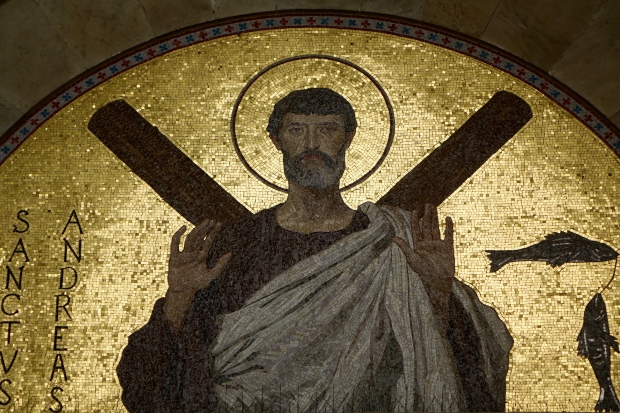 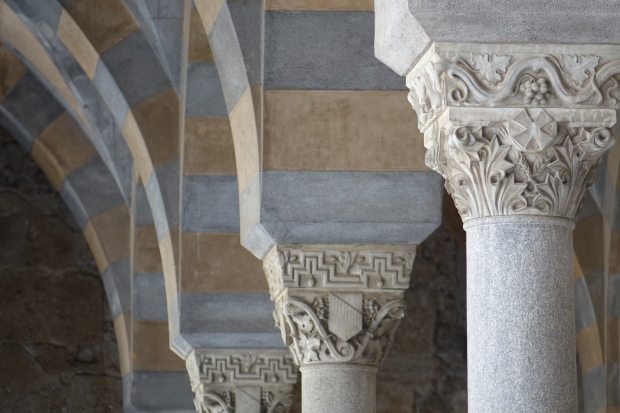 The Duomo, let alone the town and it’s beach could easily have occupied us for hours. We could have whiled away the afternoon leafing through the satisfyingly rustic handmade papers for which the town is famous, or sipping upon the limoncello which it makes by the cart load. But we had somewhere else to be – the real gem of the Amalfi coast – a place which isn’t so much in Amalfi as up on the hills behind it: we were off to Ravello.

More about that later in the week…