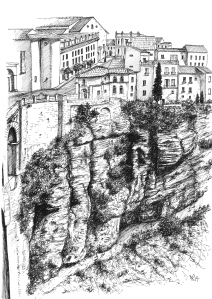 I could have sketched Ronda, the sumptuous Spanish city in Southern Andalucía, forever. Not only were the clusters of white terracotta-roofed old buildings more than easy on the eye, but the great El Tajo gorge upon which the city is precariously built is itself a feast for the eyes, and for a sketchbook. With its multiple craggy rocks, rounded by centuries of weather beatings and the expanse of plant life which has crept over its surface, the steep sided cliffs of the gorge are a picture of complex shapes, angles and shadows, and taken as a whole almost appear to defy gravity, such is the vertical, and in places almost inversed top heavy standing of these vertiginously high cliff faces. All this of course makes for a sensational drawing subject, and within hours of moving into our sumptuously large bedroom and terrace in the Paradores Hotel, I began two pen sketches of the incredible view which we could see from every part of our room. 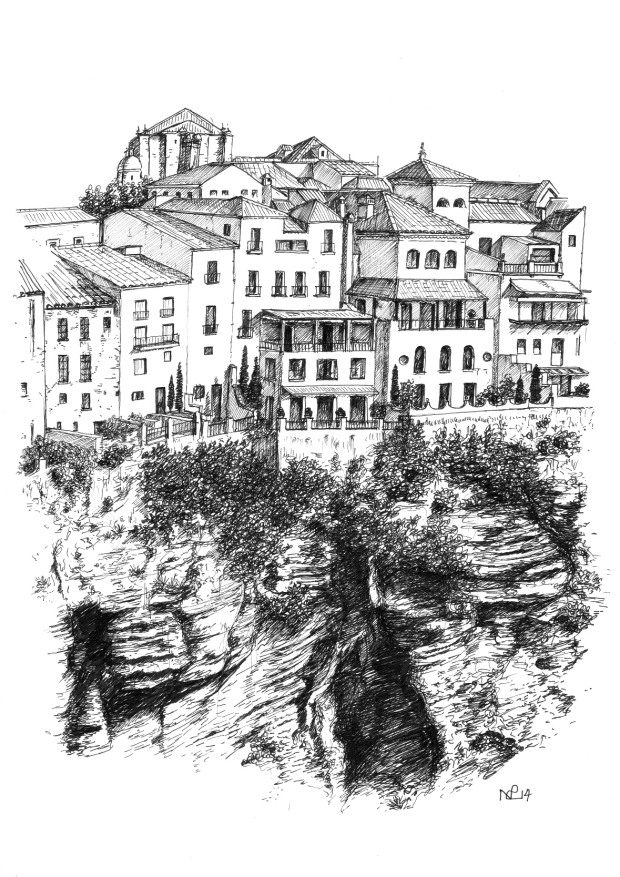 The two sketches are fairly similar, hence why I am posting them together. They concentrate on the same section of the gorge, with a view onto the oldest quarter of Ronda with its main church stood proudly at the centre. However, one focuses more on a cluster of buildings showing just a little of the gorge below, while the other shows more of the gorge and just a thin slice of the bridge, helping the audience to appreciate just how small the buildings of Ronda appear when perched on the full expanse of this rocky canyon. And this is only what I could see from the hotel – the gorge plummeted deeper still, showing just how dramatic this scenery is.

I am delighted with the capacity of these sketches to have captured that drama, along with the great contrast between violently brutal rock face and highly civilised historical architecture which makes Ronda – and now these sketches – so interesting to see.