I suppose it shouldn’t come as much of a surprise. It took my departure from London after 12 years of living there to recognise that the city, while not consistently beautiful, still has a certain amount of inspirational magic to it. When I lived there I would always profess the need to travel to the Mediterranean and beyond in order to find artistic inspiration. When asked whether I ever painted London, I looked at people as though they were mad: paint this city? But it’s just a pool of grey, I would say.

Yet when I visited the city afresh at the beginning of last week, and sat in the glass fronted restaurant on the 6th floor of Tate Modern on Bankside, I could not help but stare in wonderment at the beauty of the cityscape before me, as I realised that London is much more than 50 shades of grey. Indeed, with the greeny shades of the River Thames, the plethora of glass skyscrapers and old baroque and gothic churches and the terracotta hues of many of the brick buildings, London is a metropolis full of contrasting colours. 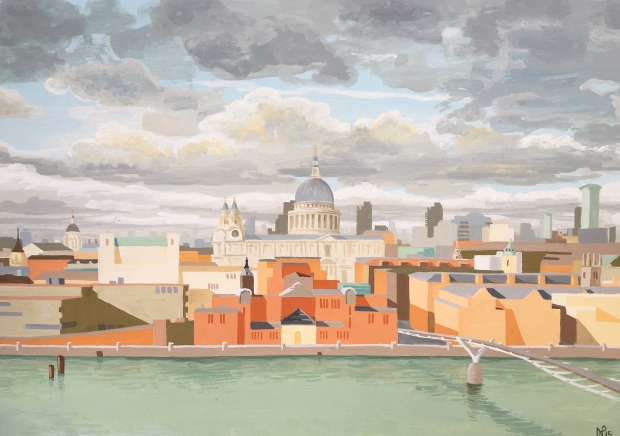 Absence makes the heart grow fonder. It’s a cliché but it’s true. And as soon as I returned from the city, I started work on this latest of my Interpretations series. A simplified but devoted landscape of a city which is beautiful after all.