One day in Ferrara

Medici, Farnese, Sforza, Borgia, Visconti, della Rovere... these are the names which dominated the Italian Renaissance… another is Este, one of whom, Alfonso I, was to marry the infamous Lucrezia Borgia. Together they moved to the Este stronghold in the city of Ferrara, nestled in the rolling pastures of Emilia Romagna in Northern Italy. And that’s exactly where we headed when, earlier last month, we returned to our beloved Bologna.

Situated just 45km of Bologna’s twin towered metropolis, Ferrara is a small city which packs a historical punch but which could easily be missed. Arriving by train to surroundings so penurious as to inspire fear rather than awe, you might wonder whether the place is worth visiting at all. Yet as with so many Italian towns, buried at the heart of this one is an old city gem which represents the perfect manifestation of its historical past and which is quite the match of its better known neighbours, Bologna, Verona, Milan… 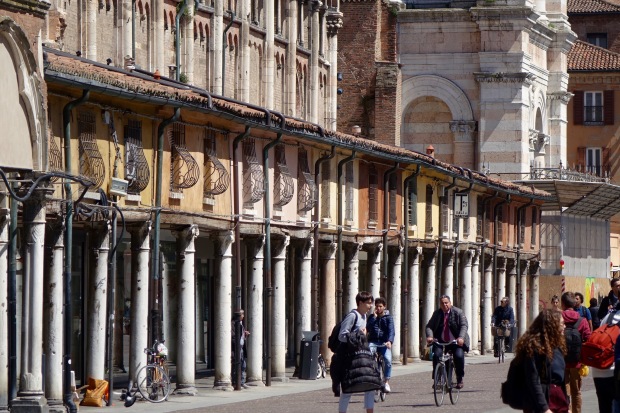 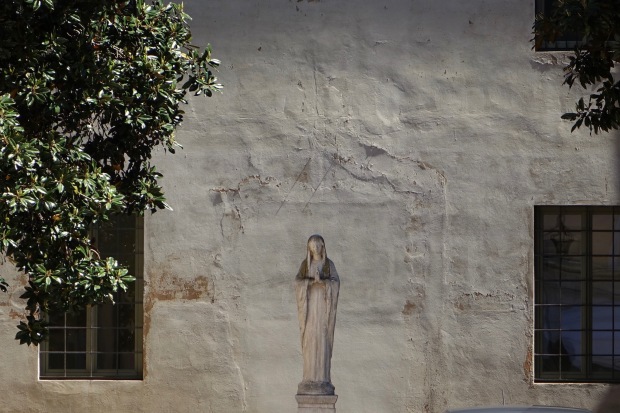 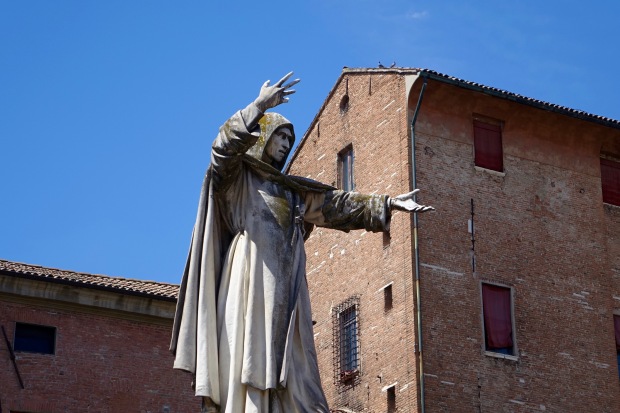 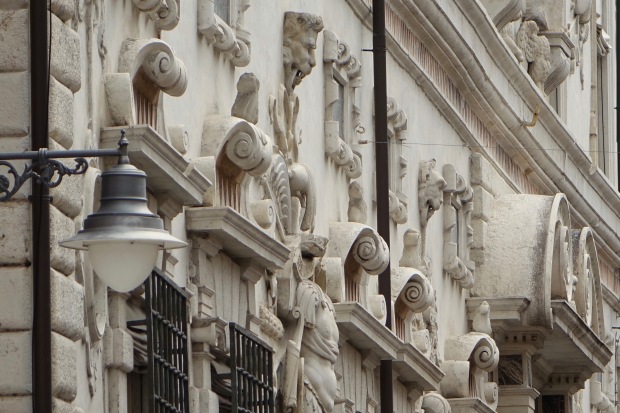 At the heart of it all, the Castello Estense is an imposing castle from fairytale lore, with four imposing bastions and a water-filled moat encircling the complex with all the romance of ancient chivalry. As the name suggests, this was the home of the Famiglia d’Este, and as we wondered from room after frescoed room, we could imagine the imposing touch of the magnificent Lucrezia dominating her new martial home, picking perhaps at at fragrant blossom which filled a terrace abundant in orange trees. But with their floral bouquet the romance ended – the castle is an otherwise austere and imposing space, and rightfully so given its role to protect one of Italy’s most important families. Outside – another imposing figure lies in wait: a statue of Savonarola, the apocalyptic friar who set himself against the indulgences of the Borgia pope, and burned the excesses of Florentines in scenes which have implanted themselves on history.

Having ventured through the Castello and avoided the icy glare of Savonarola, we wandered down the road to another Este palace – the Palazzo dei Diamanti – named after the characteristic bugnato of its exterior walls, created from some 8500 pieces of marble carved to represent diamonds. The visual effect of the exterior is certainly striking, while inside, today’s National Gallery makes for an interior replete with artistic treasures: on the occasion of our visit, we were able to enjoy an exhibition of the stunning Boldini, painter of society women and magnificent 19th century fashions. 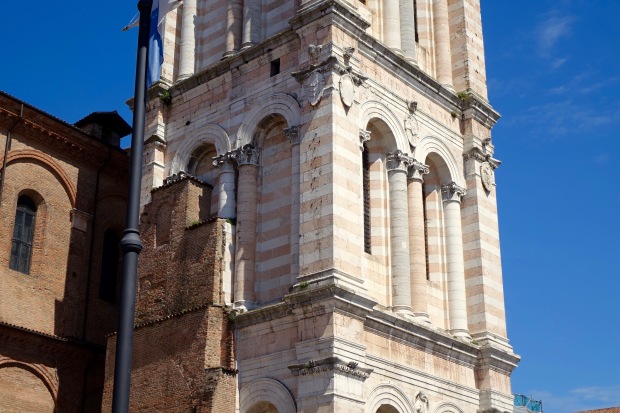 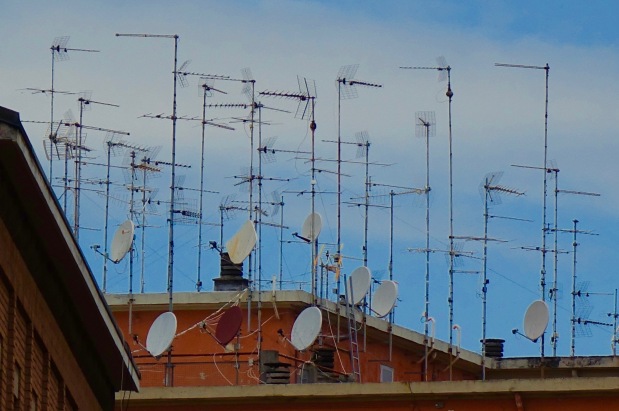 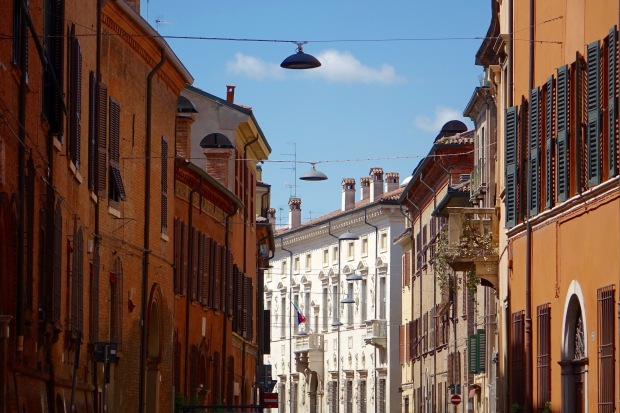 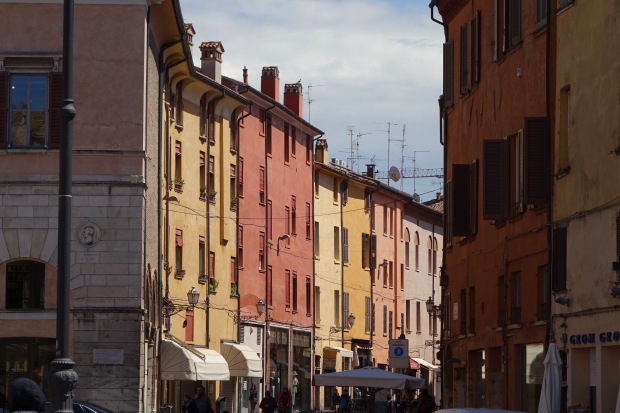 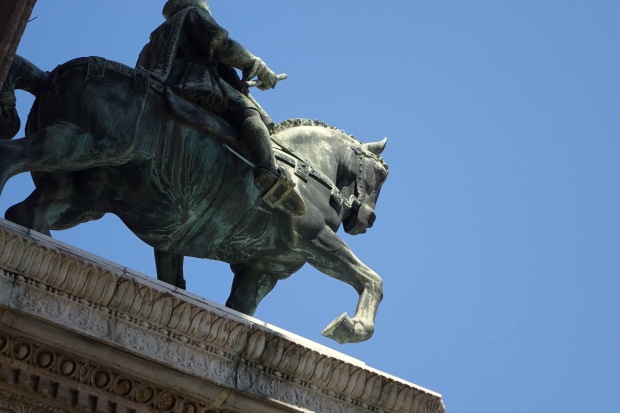 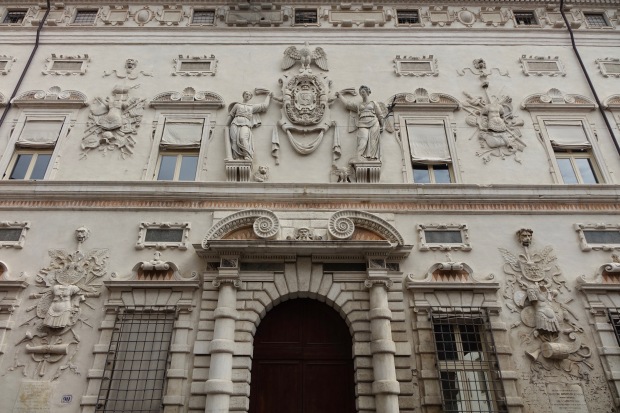 Ferrara is famous also for its Gothic cathedral, boasting as it does one of the finest examples of Romanesque architecture in all of Italy. Sadly, for us, it was covered by scaffolding, so this treasure at least had to be saved for another day. Instead, just meandering around the tightly packed, bustling little old streets and enjoying multi-layered views of campanile and cafeteria, and feasting upon the pumkin filled pasta parcels which are unique to the region, was sufficient to prove why Ferrara is a UNESCO protected city, and one not to be missed when you are in the area.