My Sicily Sketchbook: An Aperol in Taormina

Just when it looked like the Daily Norm’s Sicily series was at a close, I have a few final hurrahs to add to the collection, in the form of Sicily inspired artworks, naturally. The first is this one, a further page of the second volume of my trusty travel sketchbook, which was started in Catania and went with me along my travels across the south east of Italy’s most inspiring island. This sketch depicts the Piazza 9 Aprile in the bustling little hilltop town of Taormina. 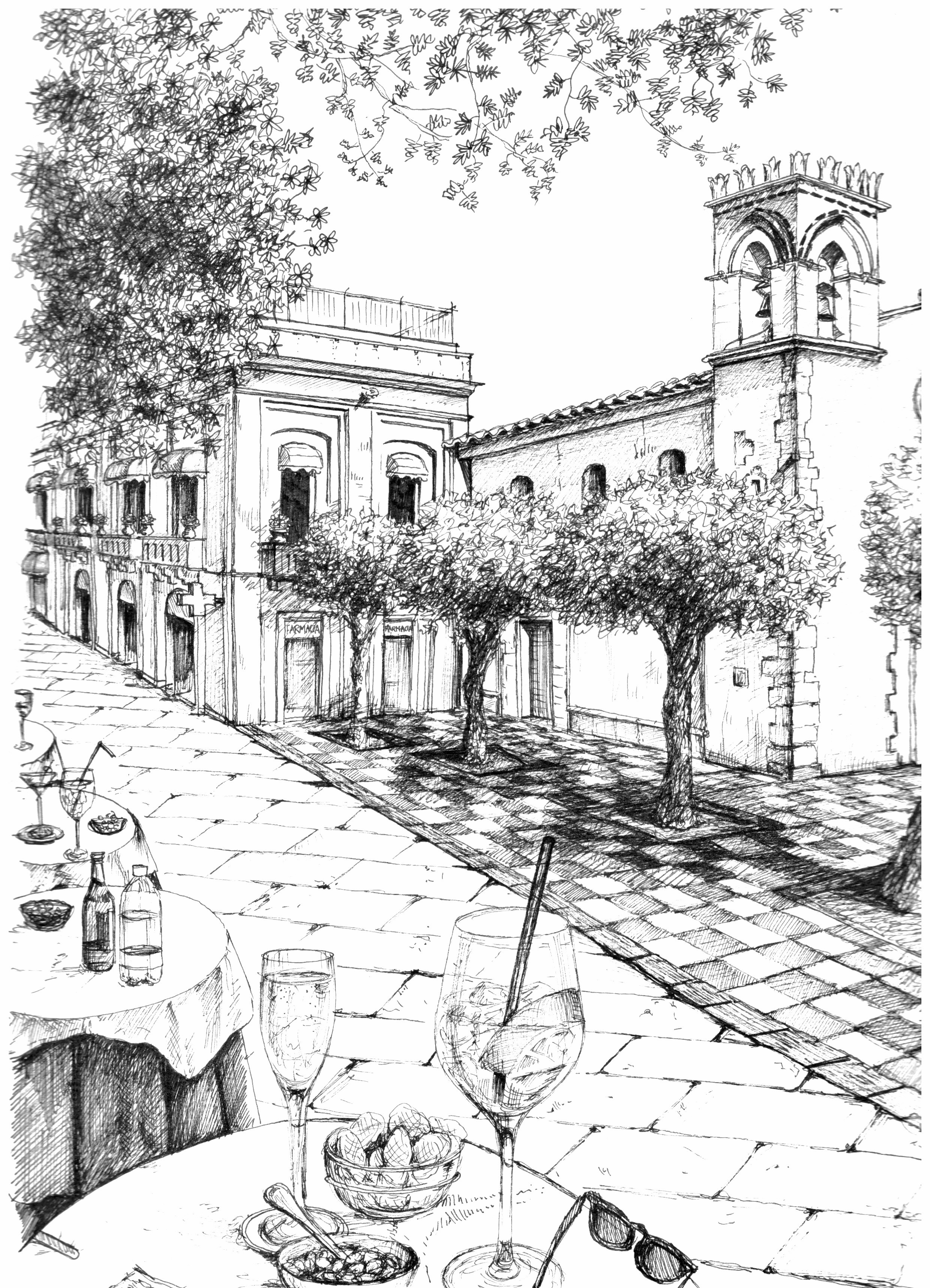 Given its reputation as the Capri of Sicilia, Taormina is a town aptly peppered with plenty of boutique designer stores, baroque embellished houses and a panoply of cafes, their tables spilling out onto the black and white chequerboard pavements. It was in one such café that I began this sketch, an aperol spritz appropriately placed on the table before me, while around us, street musicians provided the perfect accompaniment to a wonderful afternoon moment. But the aperol did not last long, and soon enough we were off to dinner. The completion of this sketch had to wait, therefore, until many weeks later back in a decidedly less Sicilian UK… hence its delayed publication on The Daily Norm. But as they say, better late than never…

Despite the chic which characterises the burgeoning boutique-lined streets and bustling café-filled piazzas of Sicily’s Taormina, the attraction which really put the town on the map was in situ long before the fashionistas took up residence. For the picture-postcard undisputed highlight of Taormina is its ancient Greek Theatre, a stone semi-circular auditorium which benefits from a stunning altitude which gives its stage the most enviable of backdrops of the sea, the coast and the magnificent silhouette of Mount Etna beyond. 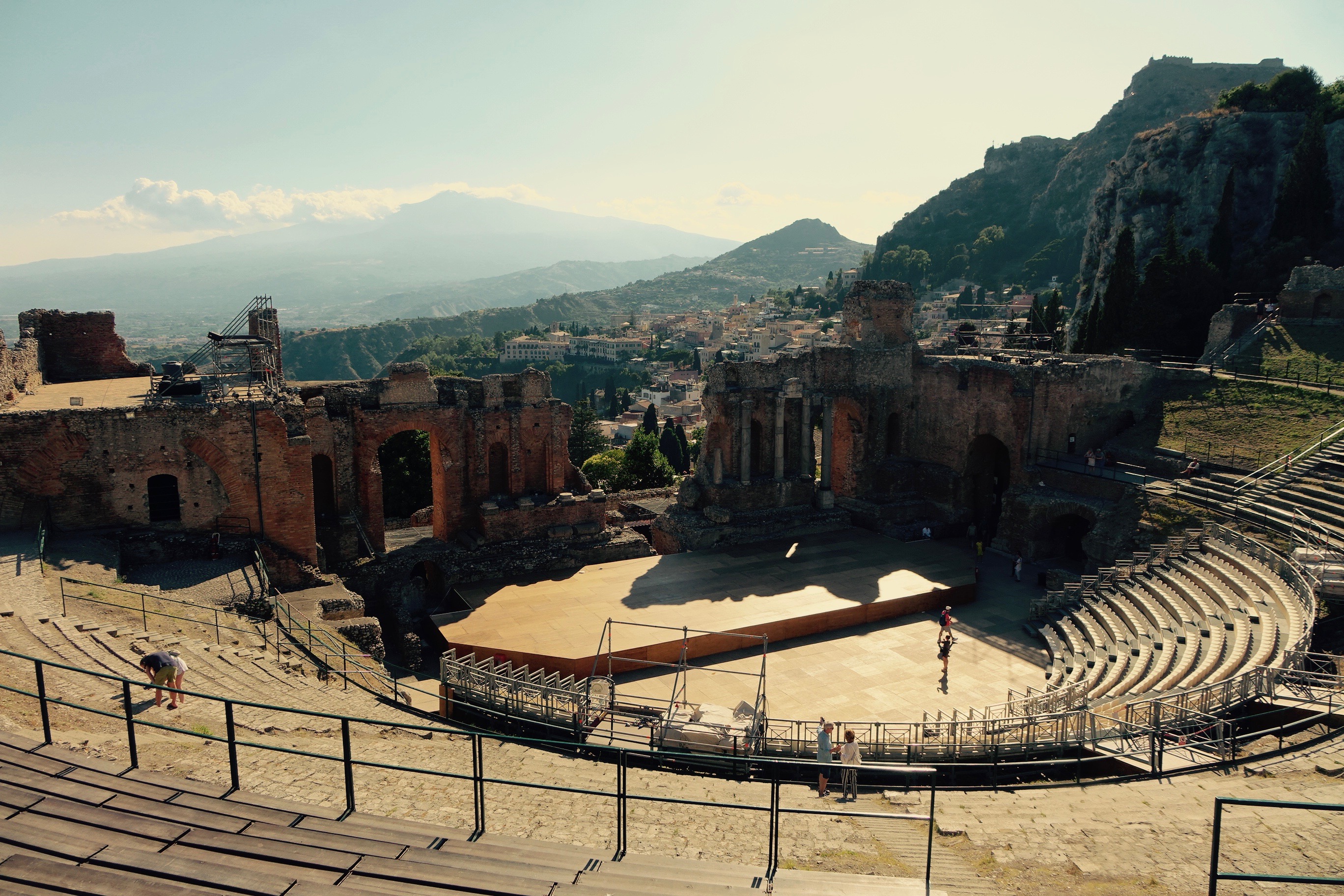 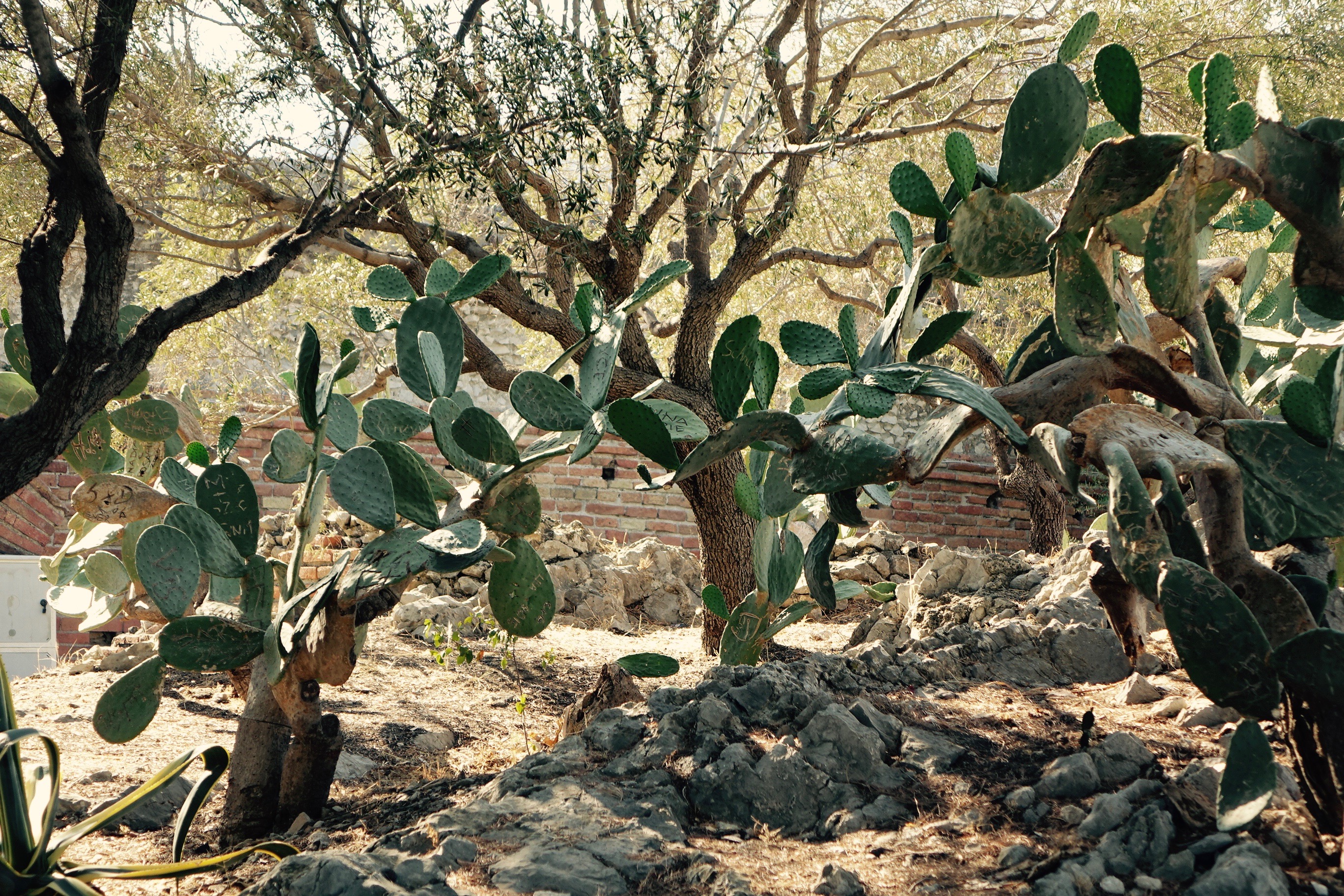 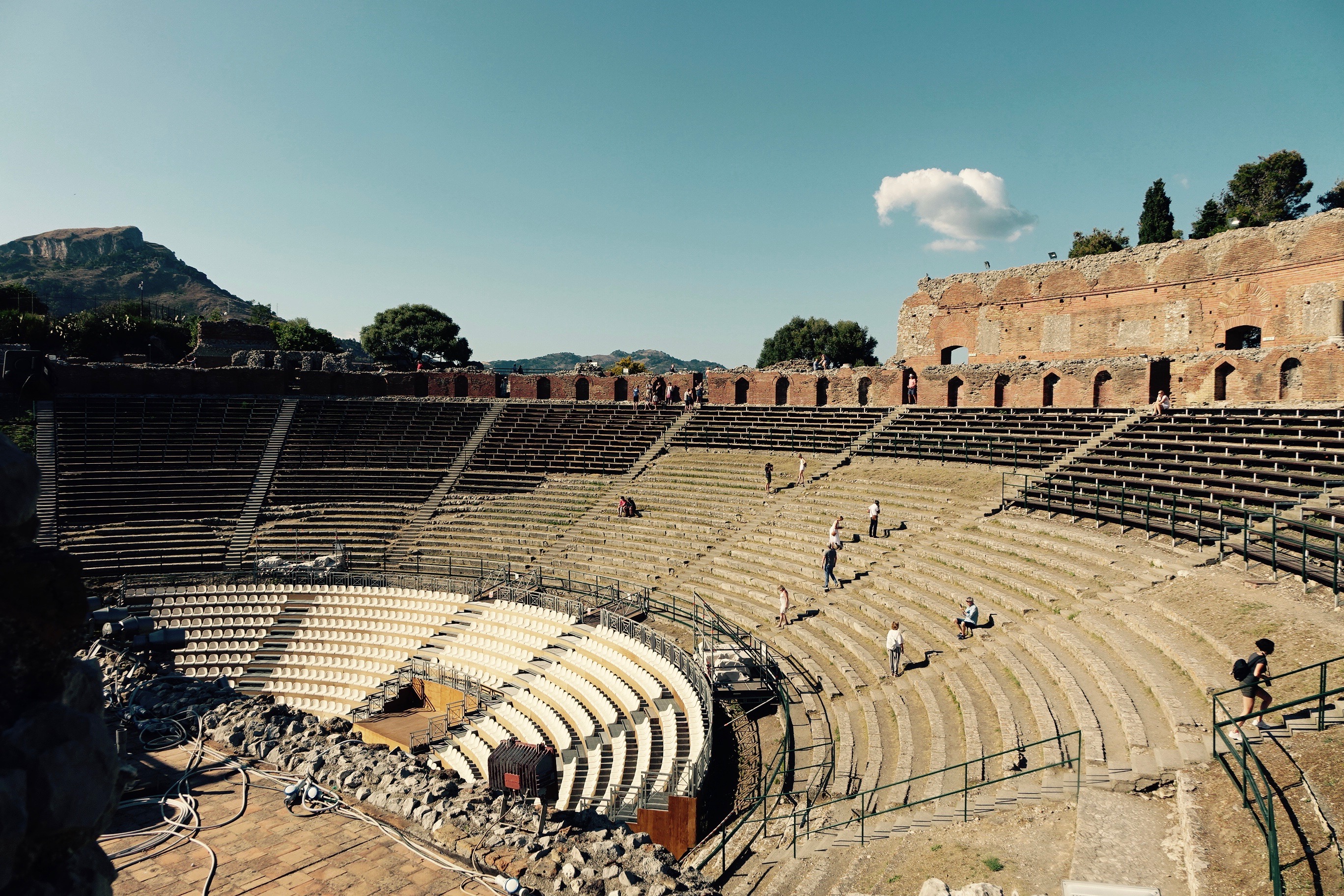 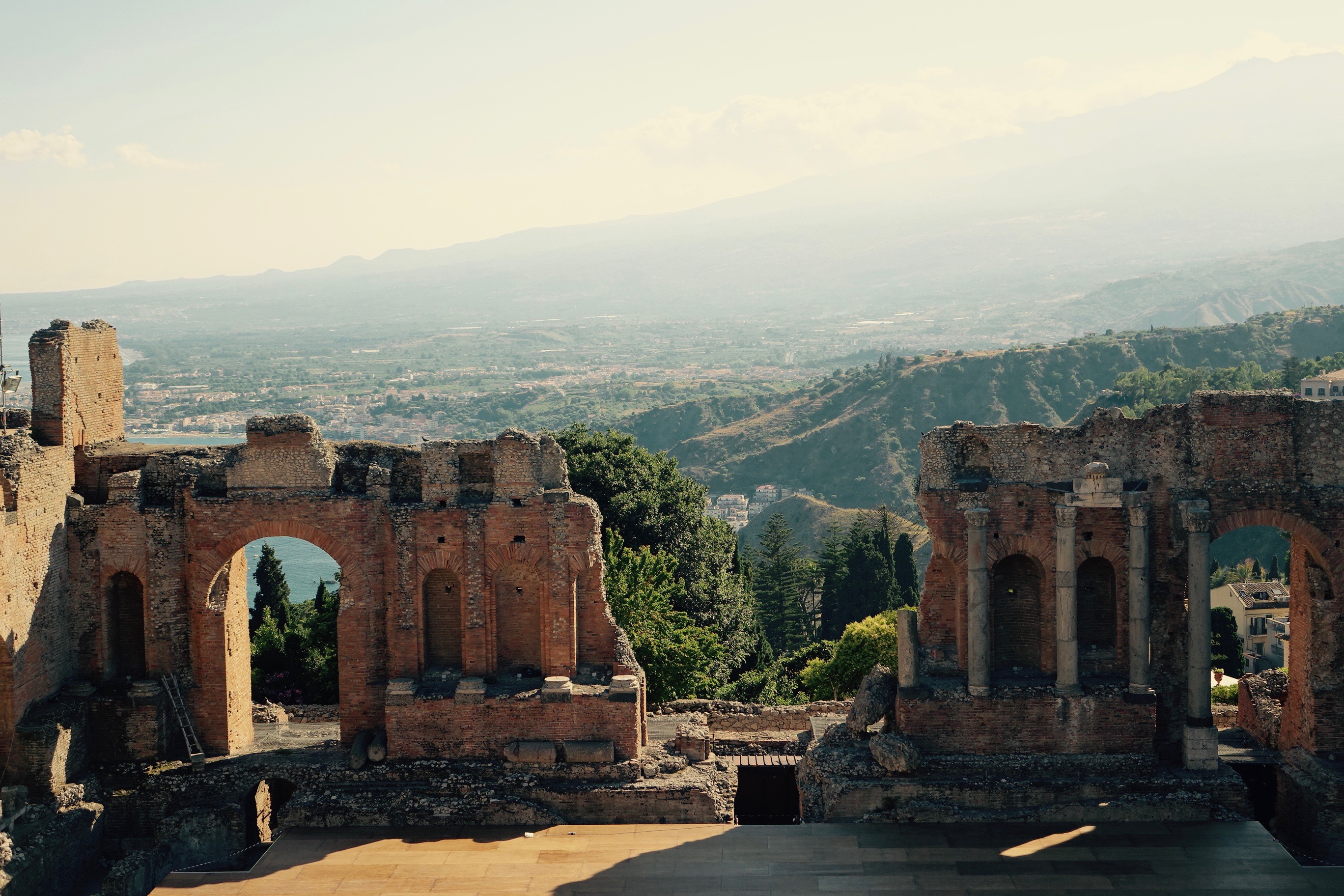 Imagine the scene: a balmy summer’s night, a bustling old theatre, a chorus of masked greek players performing Antigone or Media, and beyond, the silhouette of Etna, cloud slowly smoking from its crater like a wise old onlooker smoking a pipe in the distance. Yes your bottom might be a little sore from the stone seats, but imagine the view, and the naturally occurring brilliant acoustics which somehow manage to transport the voice of the actors on the stage to the very highest seat, despite there being no speakers nor modern day technological intervention. Sadly our trip to Taormina’s theatre did not coincide with one of the festivals when this magnificent theatre is put back to use, but that did nothing to dispel the magic of the place which was omnipotent across its ancient structure.

But the ancient theatre is not the only place from which Taormina’s trademark views can be enjoyed. From the Municipal Gardens, crafted as they were by Florence Trevelyan along another ridge of high hillside, the views of Etna and the coast are uninterrupted, and delightfully framed by the bounty of cypress trees and pines, flowers and topiary which fills the happily verdant gardens. 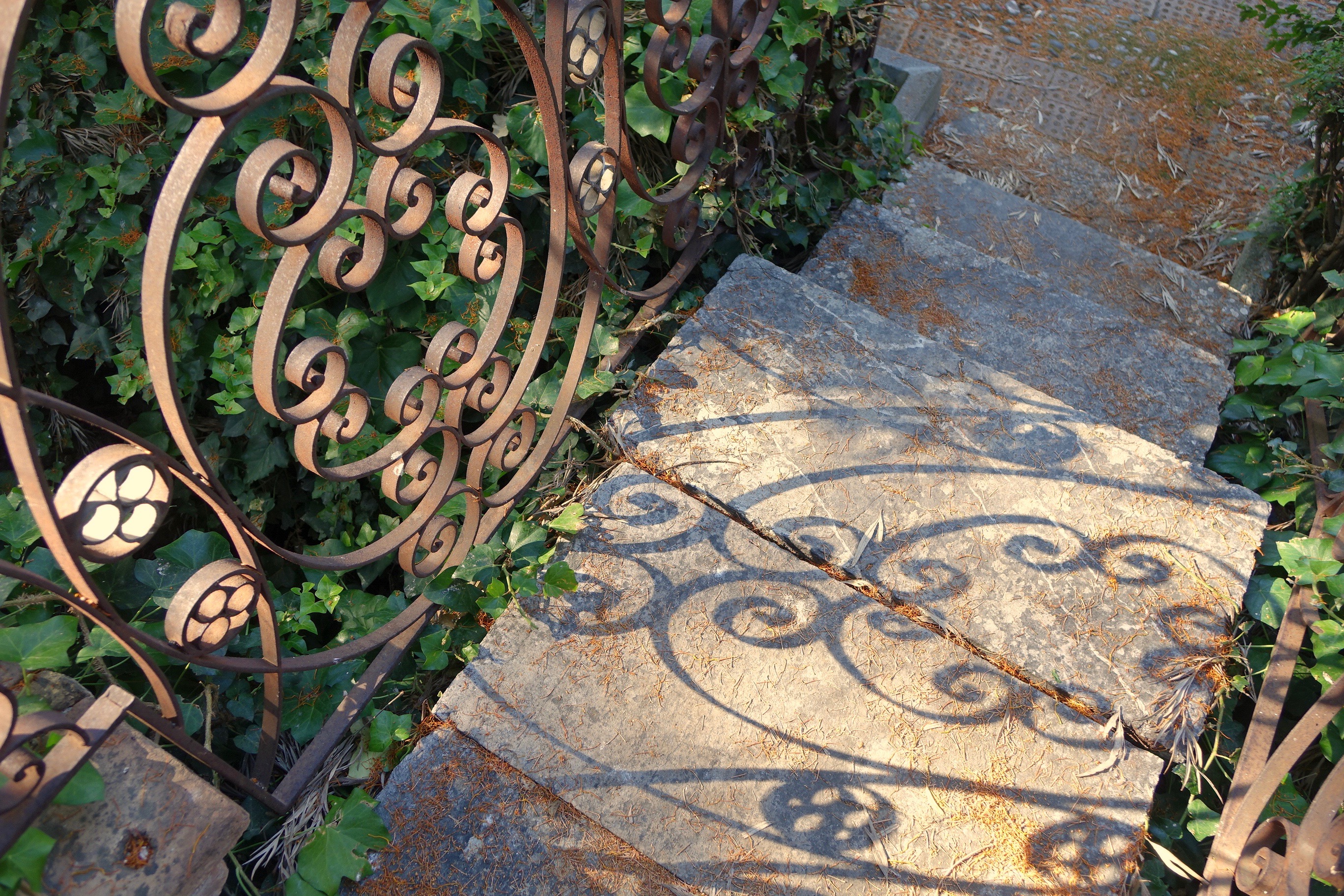 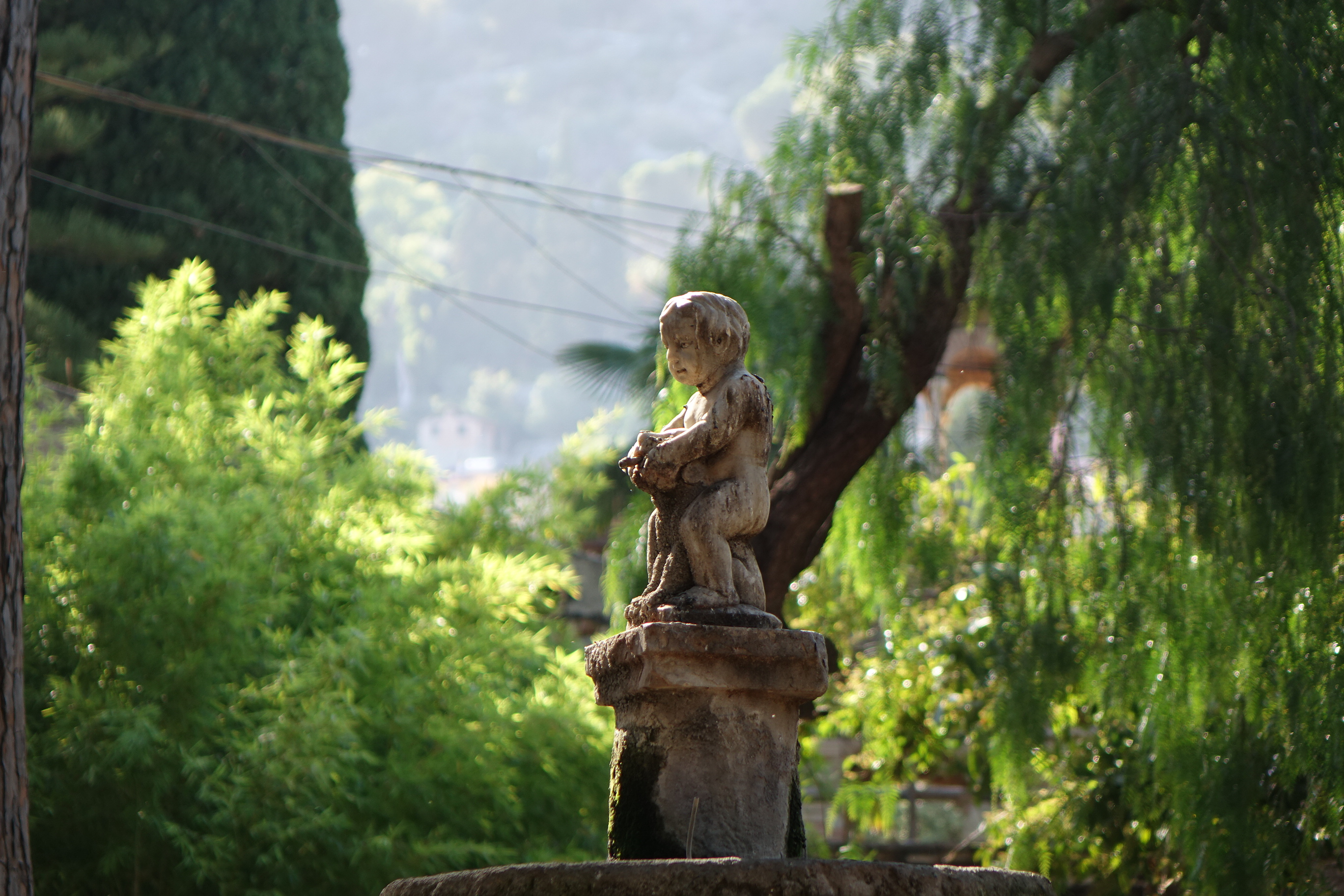 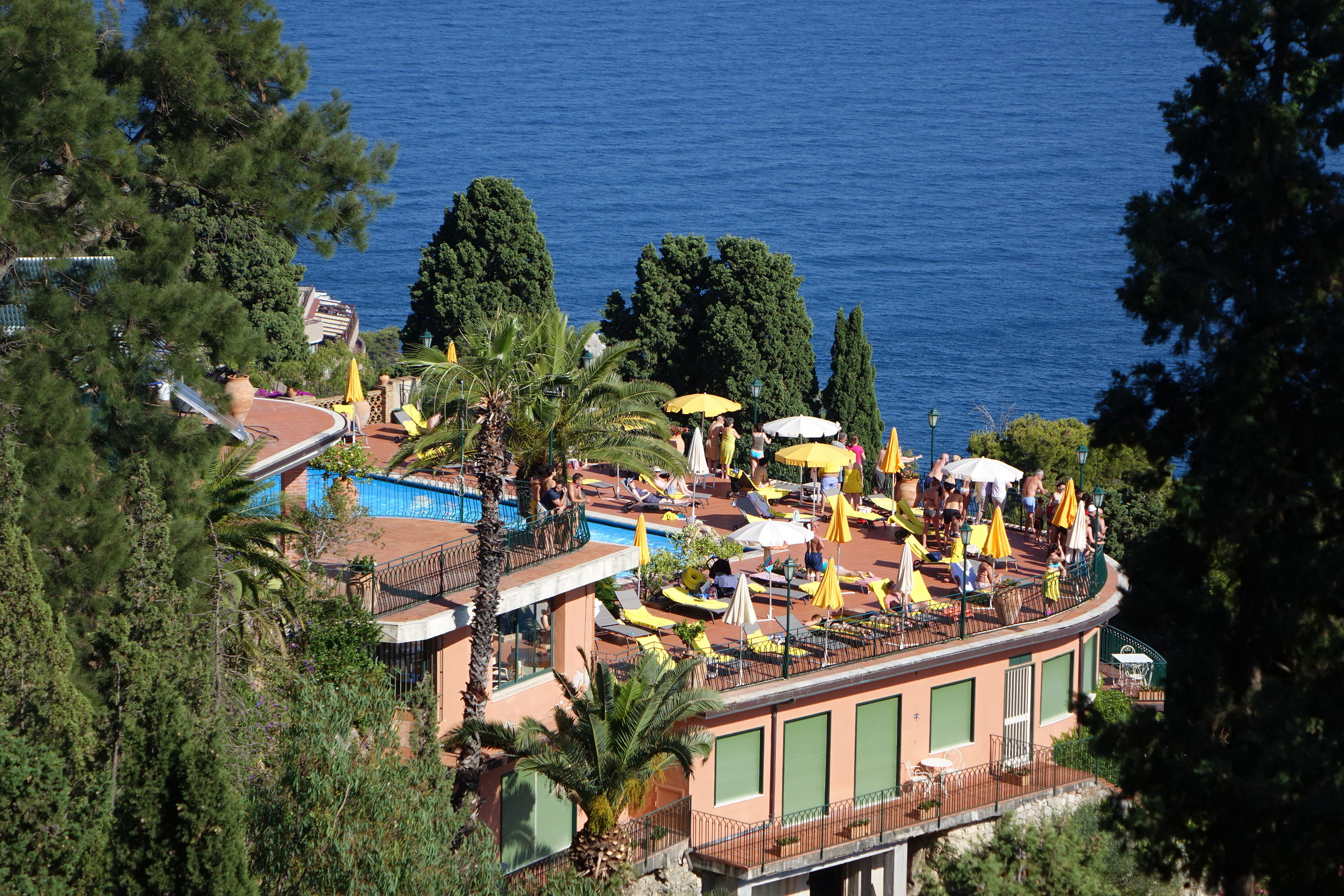 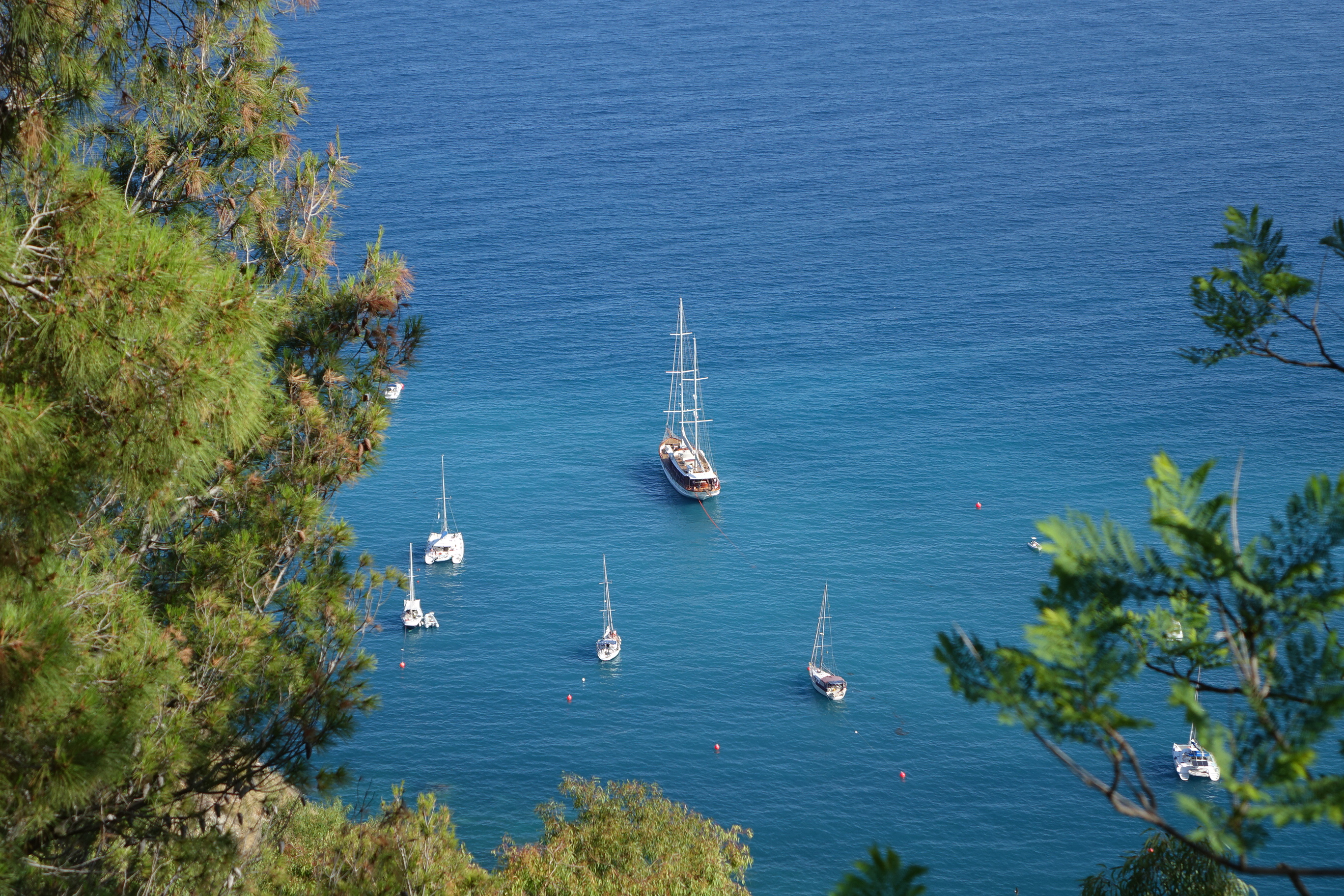 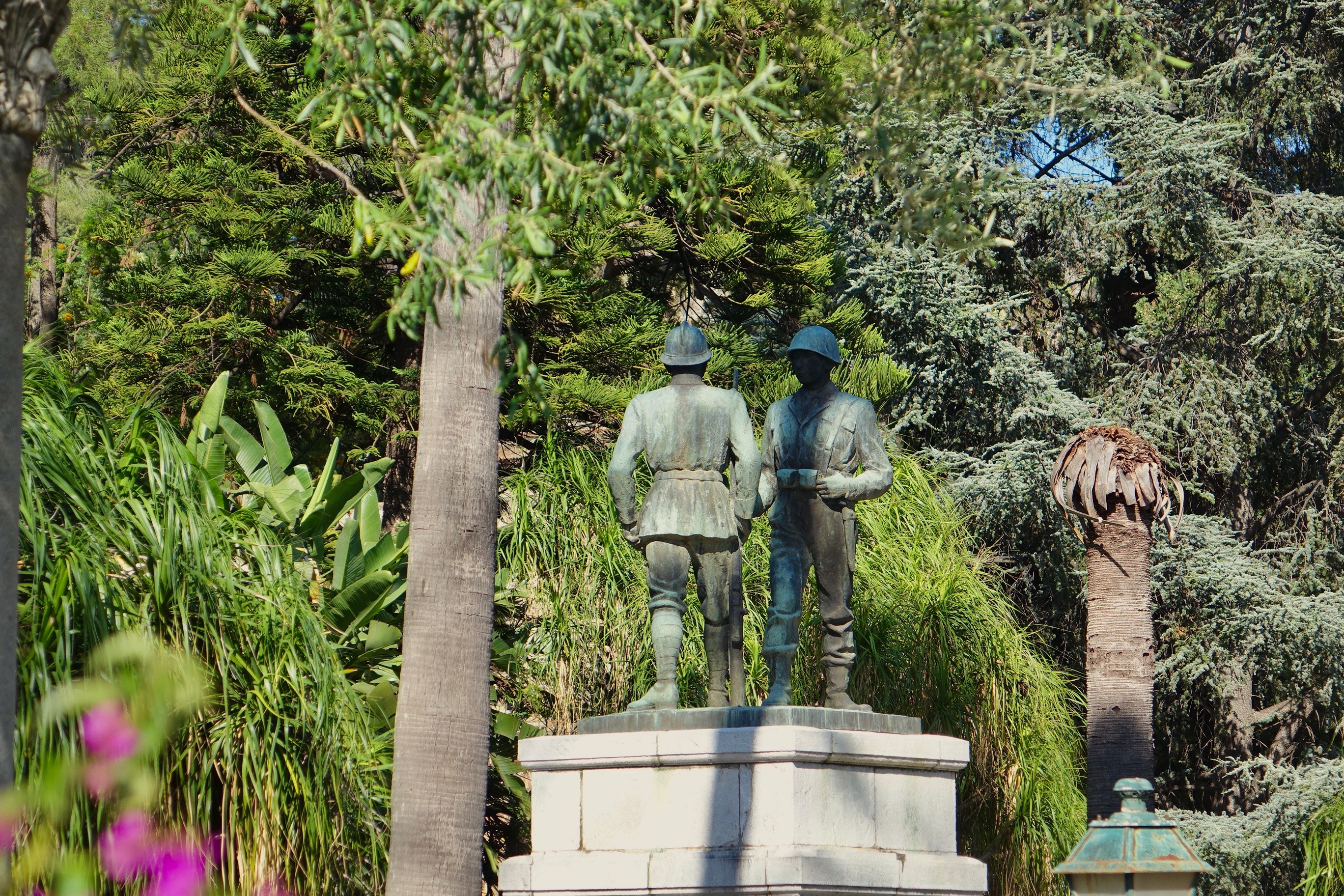 Taormina’s location is undoubtedly the reason for its historical roots and its current popularity, and views are by far the town’s most ravishing feature. But ultimately it’s the happy combination of history, views, boutique shopping and café-culture-comfort which makes the town such a pleasure to visit. After all, what better way is there to contemplate a view than with an aperol spritz in one hand, and a few bags of shopping in the other?

I am something of a lucky Mediterranean beach regular. Whether it be hanging out on the beaches of the Costa del Sol at my parents’ house, or whiling away the hours during almost 3 years residency on the stunning island of Mallorca, the beach and I have become firm friends. I was even born by the sea in England, and lived by the coast my whole pre-adult life. But every beach, and every coast has its own character, never more so than the Italian Riviera which is synonymous with carefully raked sand, striped umbrellas, and sunbeds usefully fitted with a kind of head shade contraption. Genius. I don’t spend all that much time on Italian beaches, so it was with some delight that I passed some brief hours on the beach of Isola Bella, the stunning little semi-circular inlet which, as the name suggests, has a “beautiful island” at its centre. That island, rumoured to have once been the home of long term English Taormina resident, Florence Trevelyan, is today a natural habitat, but retains a cute little house and a pebbly walkway which, when the tide is low, allows access to those beachgoers wanting a stroll around a mysterious feature of this otherwise very Italian beach. 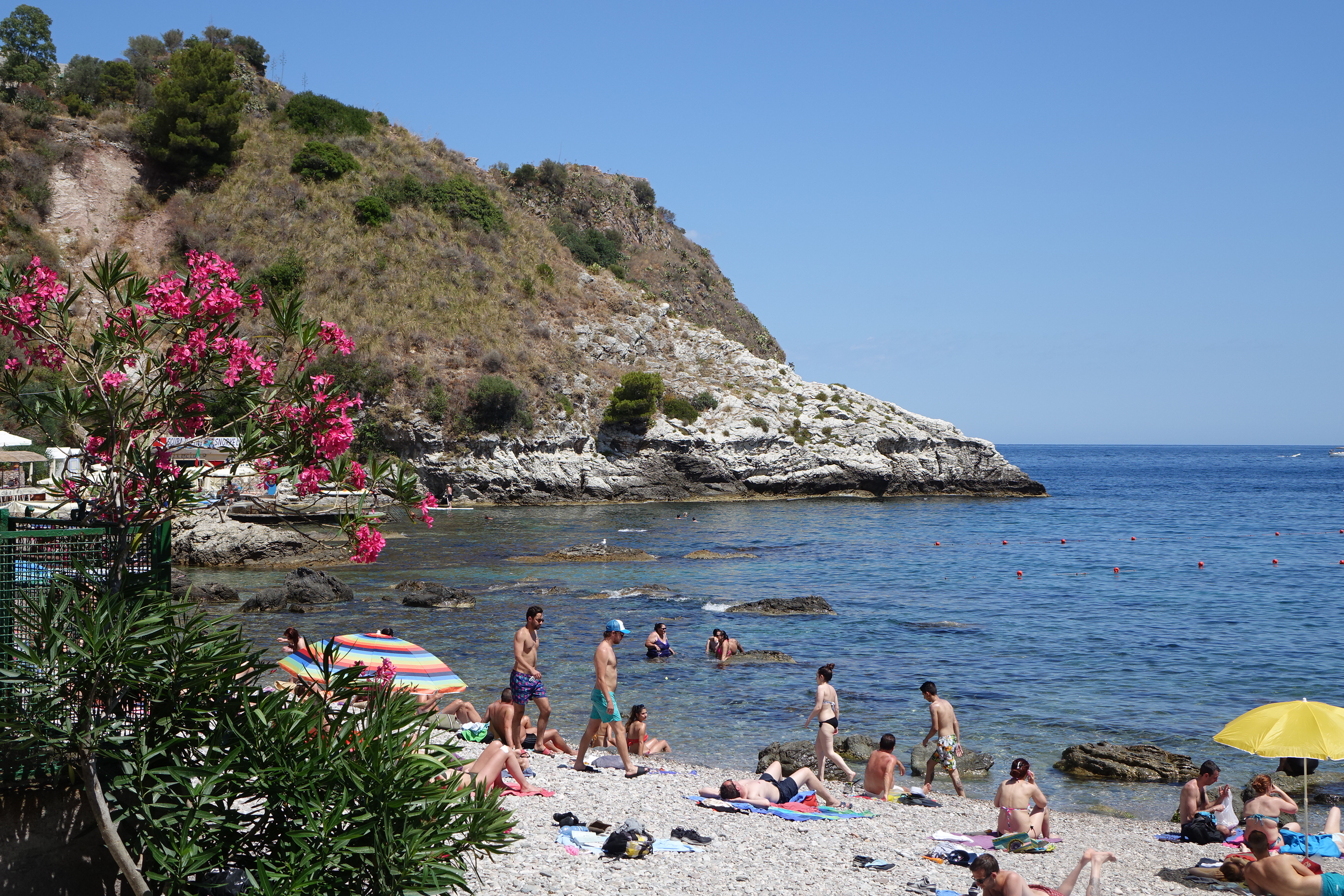 Having explored the island ourselves, a venture which required a carefully balanced walk across countless pebbles and the urgent purchase of jelly shoes to protect our battered feet soles, we spent the rest of our time on this beach lounging amongst striped umbrellas aplenty, reading calmly as the sound of waves gently nudged the shore, and best of all, breaking for lunch, where a beach side café served up grilled squid with a picture perfect view of the sea from whence it came. However perhaps my favourite experience at this splendid Sicilian beach came not from our daytime sampling, but from a walk at night, when the hoards had gone, and only the moonlight remained, casting an eerie silvery glow upon Trevelyan’s island sanctuary and the calmly rippling waters. Lying on the pebbles, feeling the heat of the day slowly reflect off their surface, and listening to the water and is popped and sploshed against the larger rocks made for one of the most memorable, and romantic, moments of our trip. It wasn’t so much the time for admiring the beauty of this beach, but one in which the senses of sound and smell were tantalised like never before. 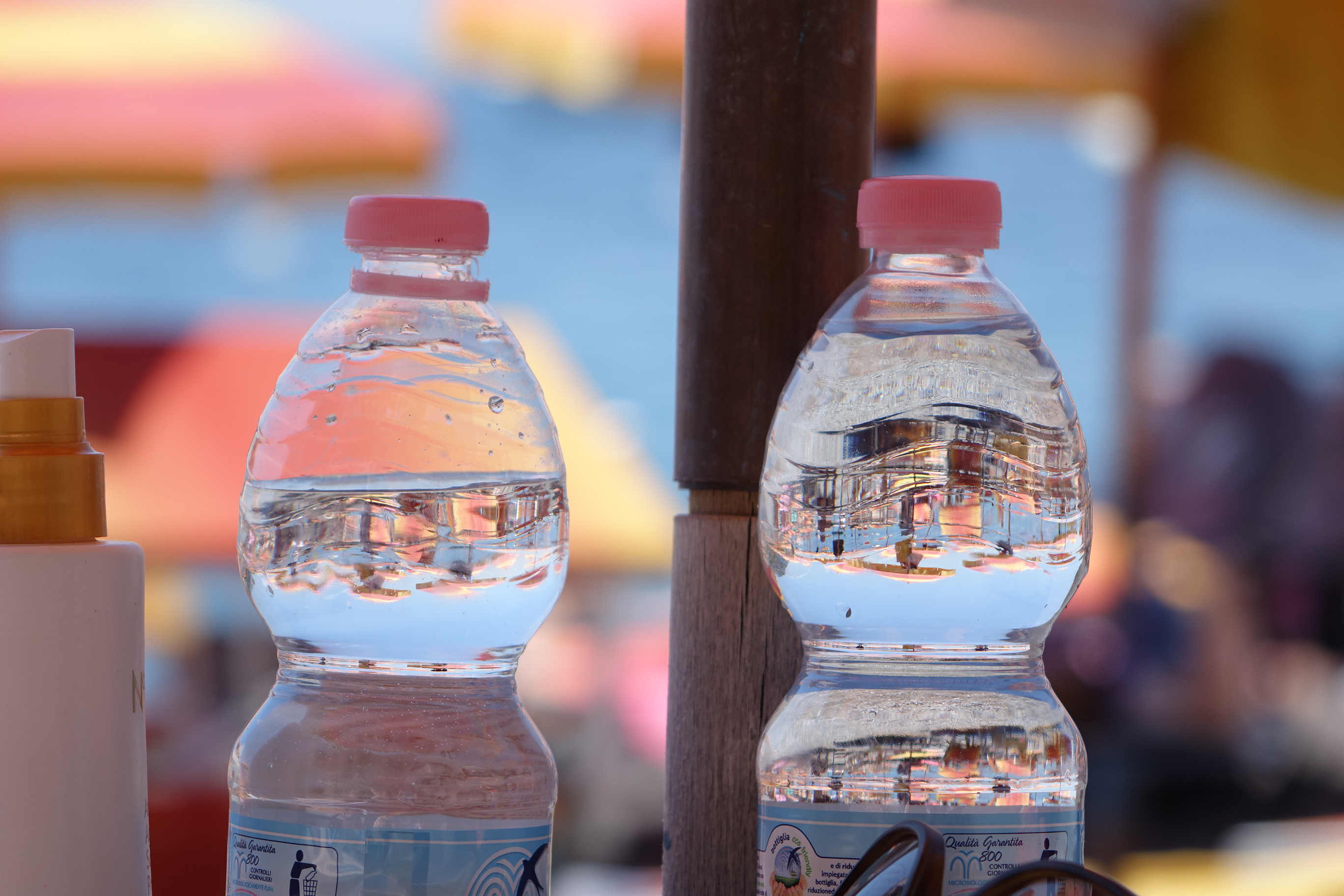 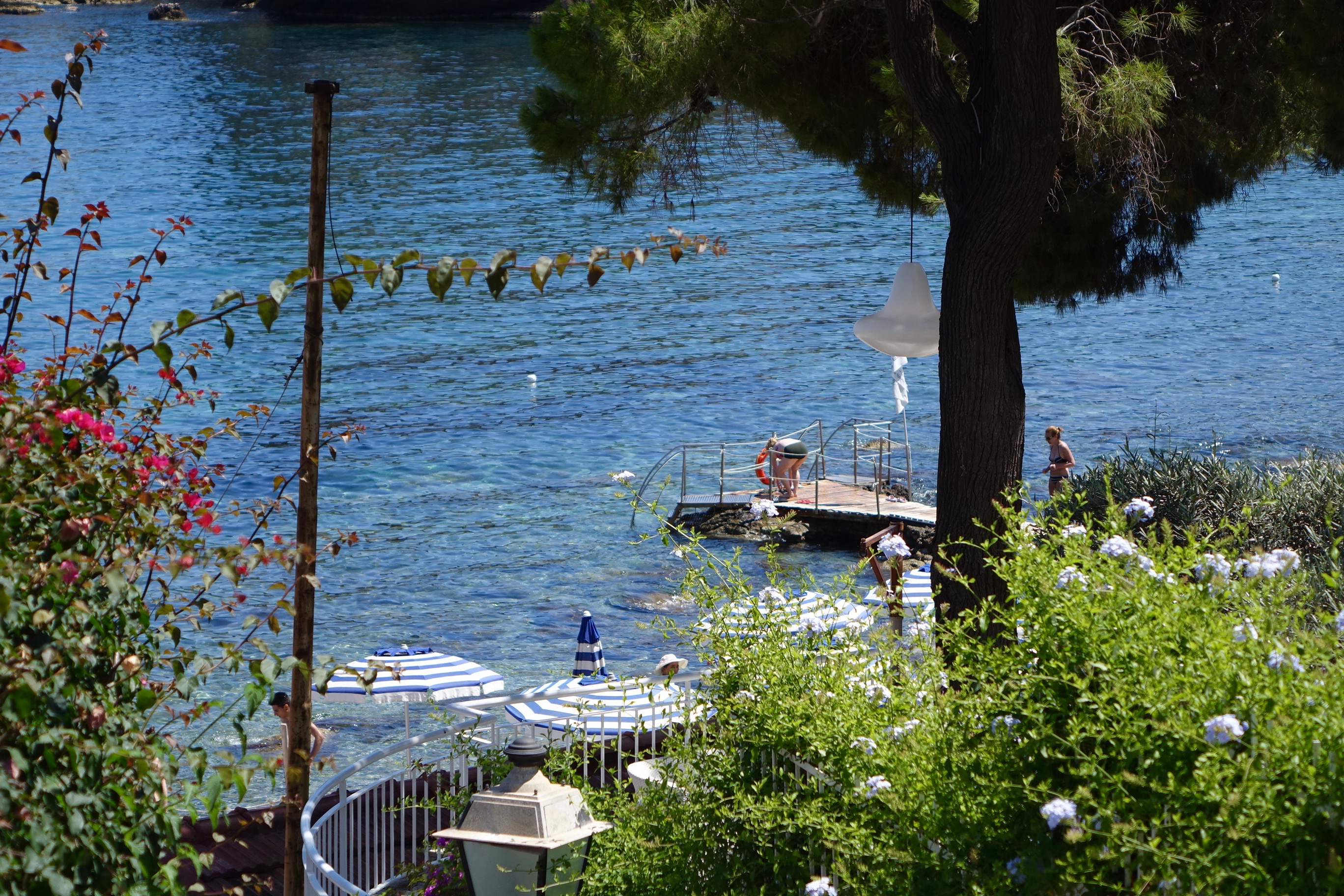 When I am in the Mediterranean, when I even think about it from afar, artistic inspiration stirs inside me like a typhoon whipped up by a storm. The smells, colours, sights and sensation of the Mediterranean combine to create a heady mix of cerulean-tinted sea-perfumed reflections which move me to make art. And while some of the results may be small little landscapes like this one, painted on an A4 pad of white paper with a box of travel gouaches, they capture with them a small piece of the experience.

This landscape, with its mix of simplified cubist forms and unfussy geographical outlines, falls broadly within my series of hotel-room captures, but also resembles the early interpretative landscapes I first conceived while on holiday on the Amalfi Coast. Showing the beautiful bay of Mazzarò which sits just below the hill-top gem of Taormina, this was the ravishing view which we got to enjoy daily from our rented apartment just above the beach front. While the flat was not a front line seaside property, it benefitted from the most stunning prospect – even the surrounding houses appeared to frame the view in a way which made the seascape all the more precious.

This was a work I started as soon as we arrived on Mazzarò Bay and which was quickly finished in situ. After all, seduced as we were by the house and by its location, we spent a good many hours either reflecting upon the sea or holed up in the luscious back garden. Happily we had 4 days to enjoy those magical surroundings. It was a time we wished could have continued for far longer.

From the dusty, bustling and chaotic streets of Catania, we moved upwards and outwards along Sicily’s Eastern Coast to the popular tourist town of Taormina. Situated in a delightful apartment by the sea, which benefitted from both an extensive green garden, full of lizards and ferns, and an incredible sea view over the beach of Mazzaró, we were only metres from the cable car station which led us straight to Taormina, perched upon its rocky heights. There was something about the quaint little cable cars which took us up from the coast to this ancient town which reminded very heavily of the set-up in Capri, and indeed the town of Taormina also had something of the Capri style about it. 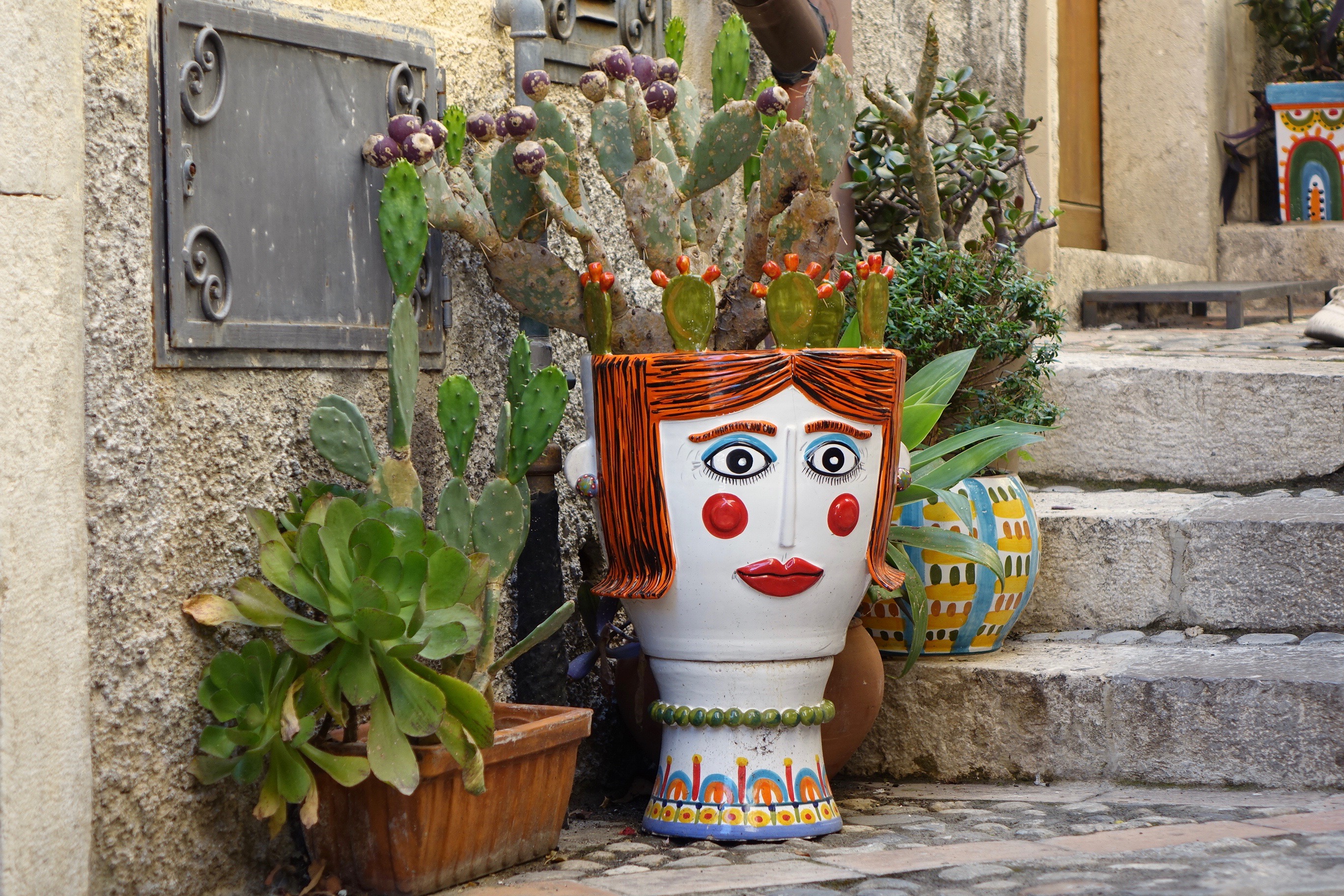 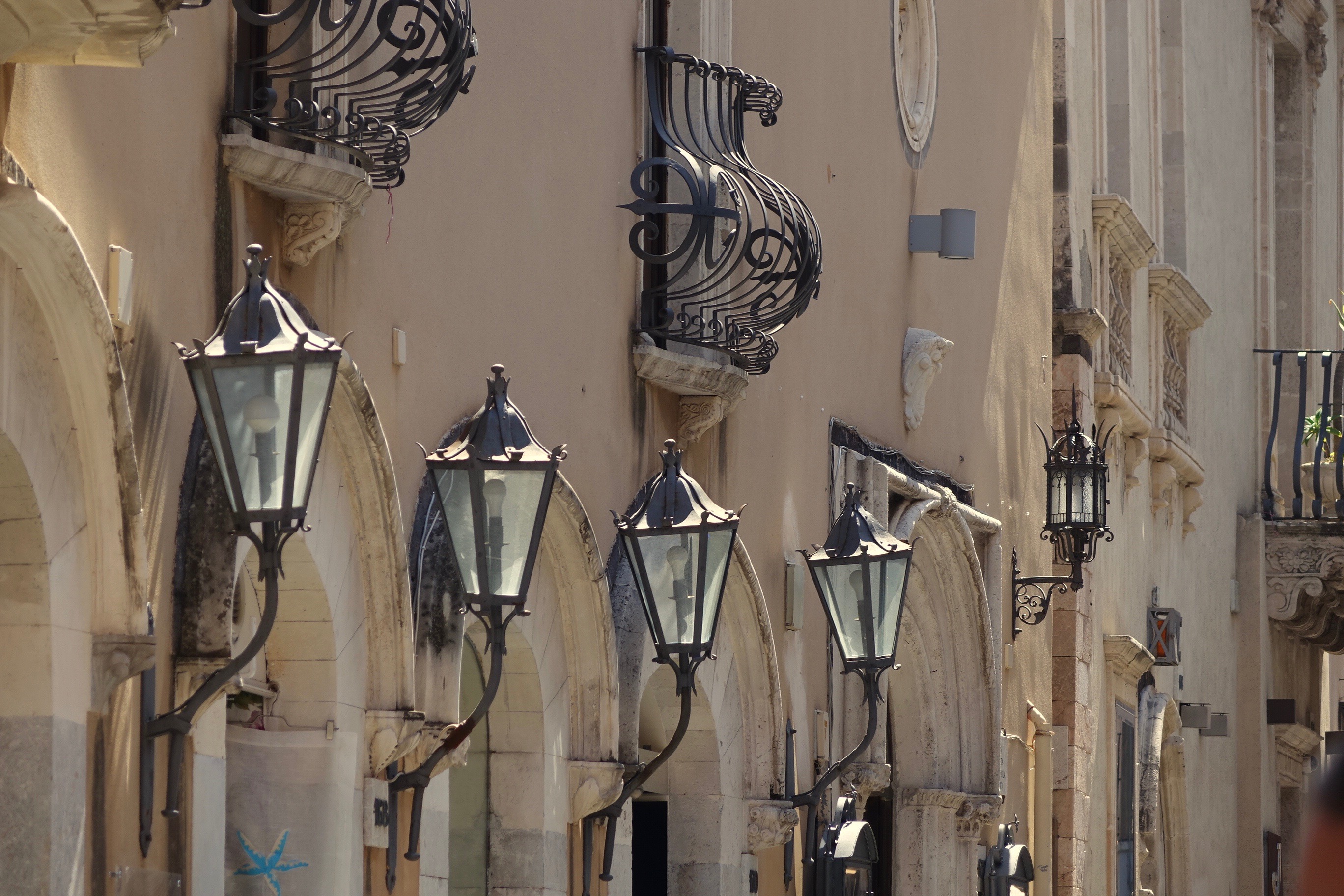 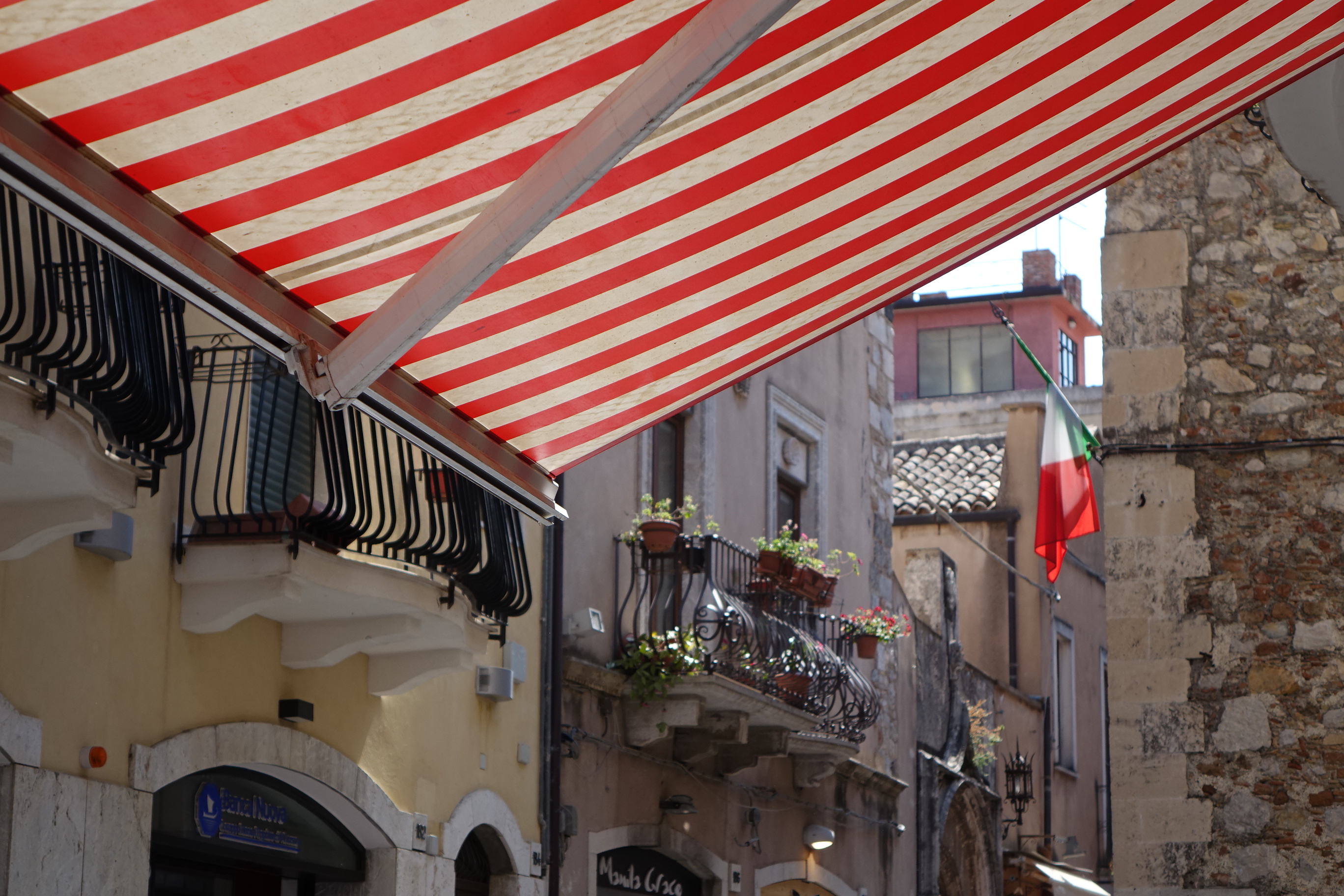 While the popularity of the town of Taormina has very much hinged upon the presence of its stunning Greek theatre and its dramatic Etna backdrop (more about that next time), no doubt the heritage of having taken its rightful place as a stop on the Grand Tours of old has contributed to the somewhat classy breed of tourism which characterises Taormina today. Of course you’ll see the odd inappropriately vested tourist ambling along the salubrious Corso Umberto, but you’ll also notice that he looks out of place. For today’s Taormina is a town of quaint old streets and pricey boutiques, of people-watching cafes and streets adorned with fountains and churches and marbled pavements. In short, everything that in combination makes for my favourite kind of holiday destination. 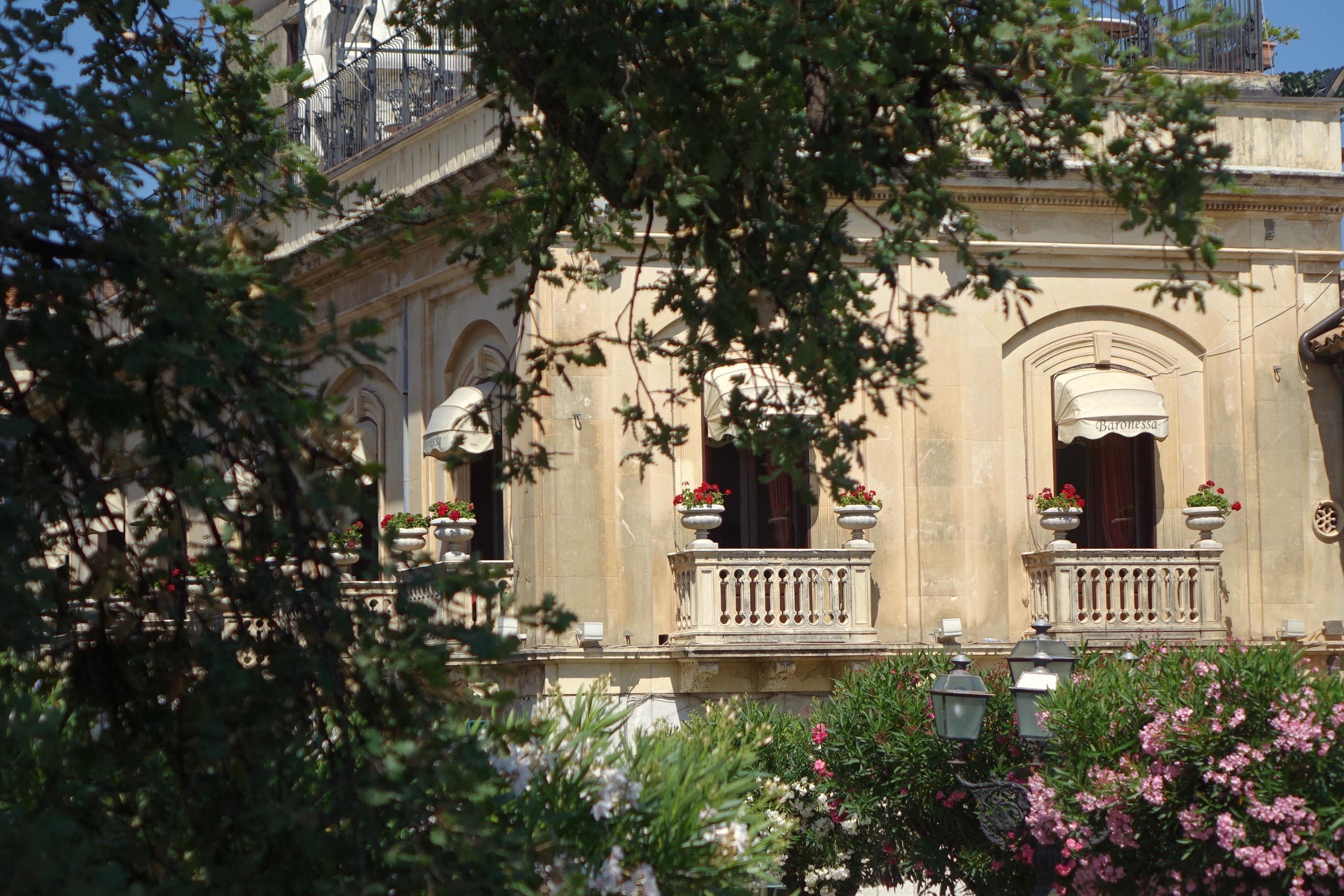 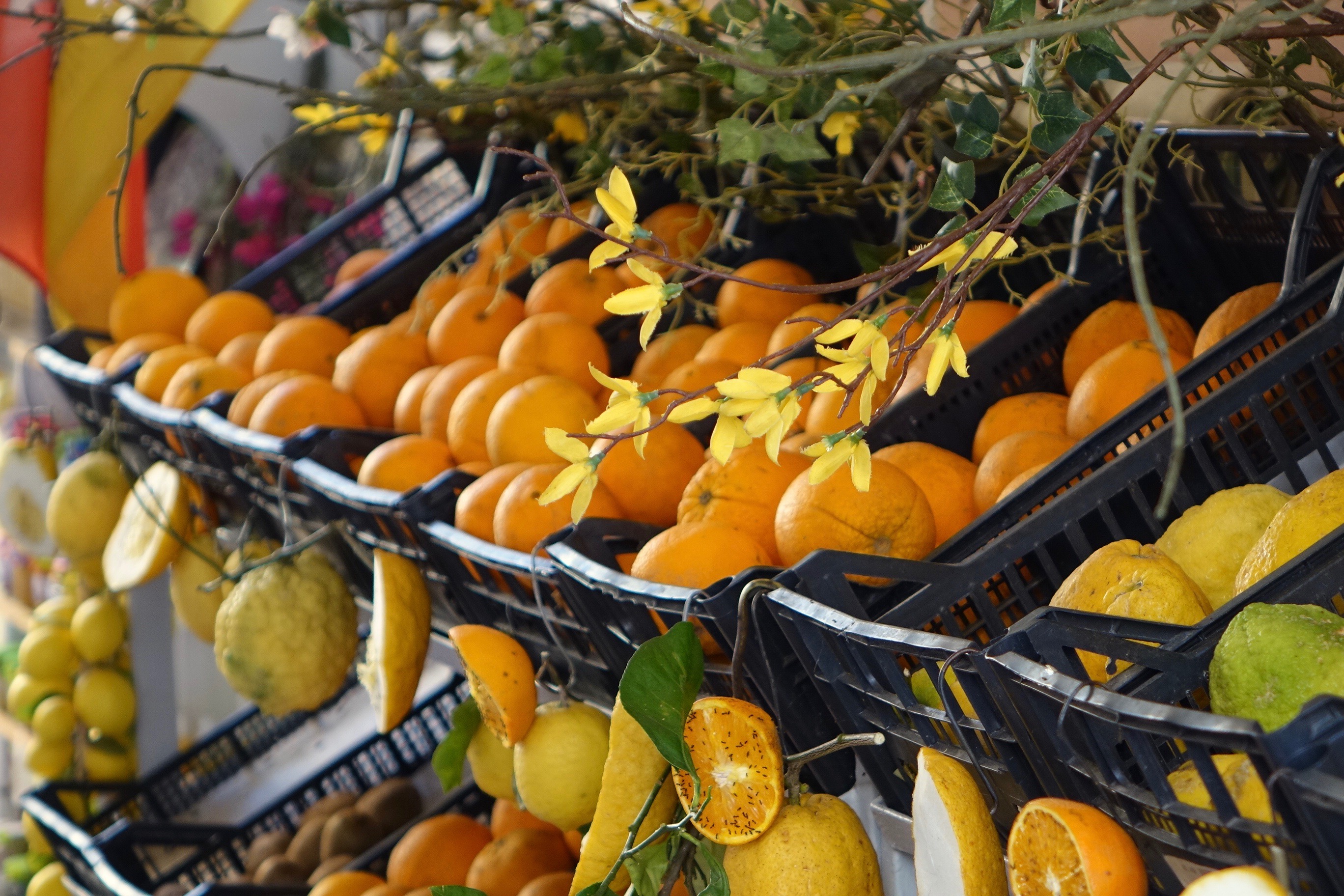 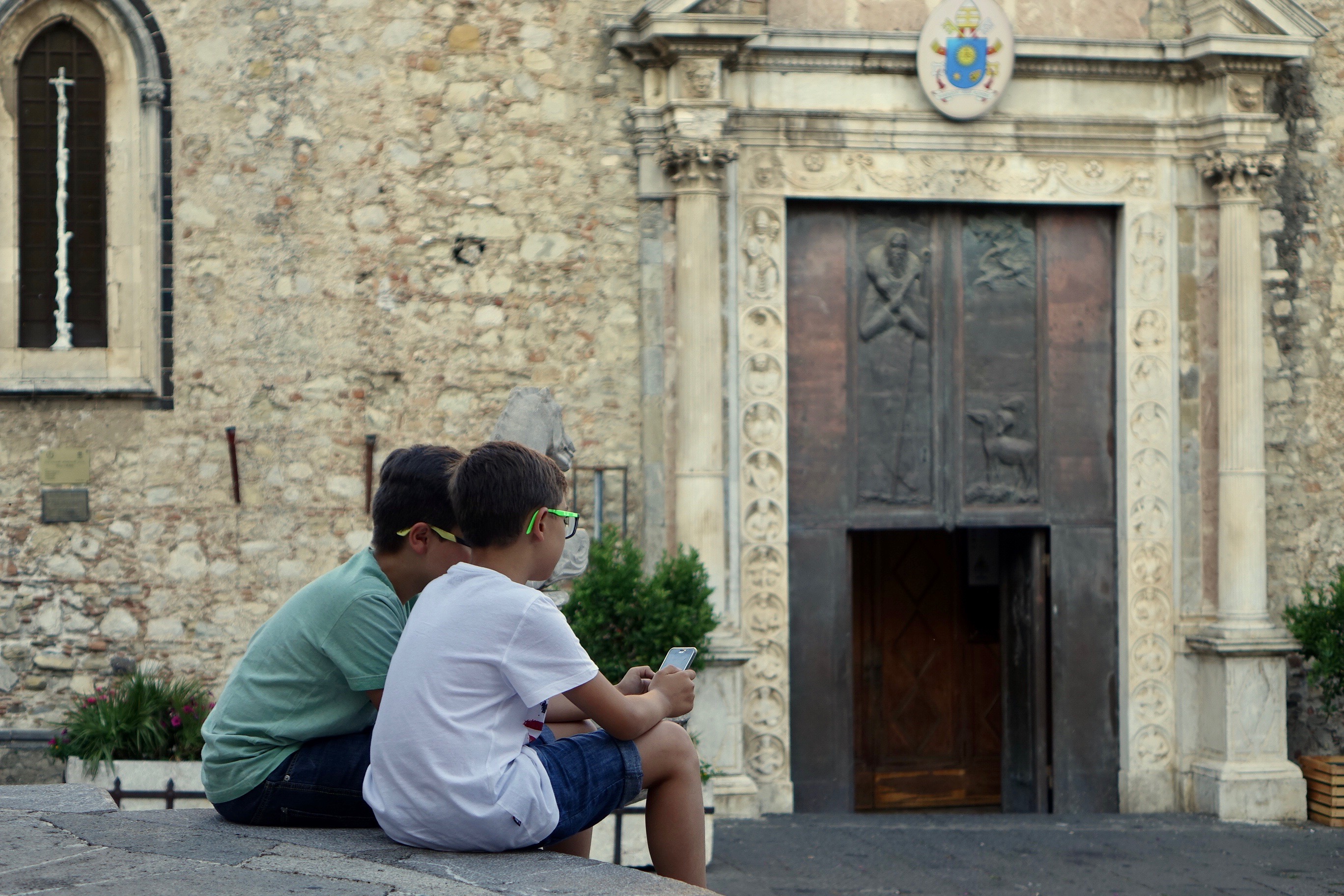 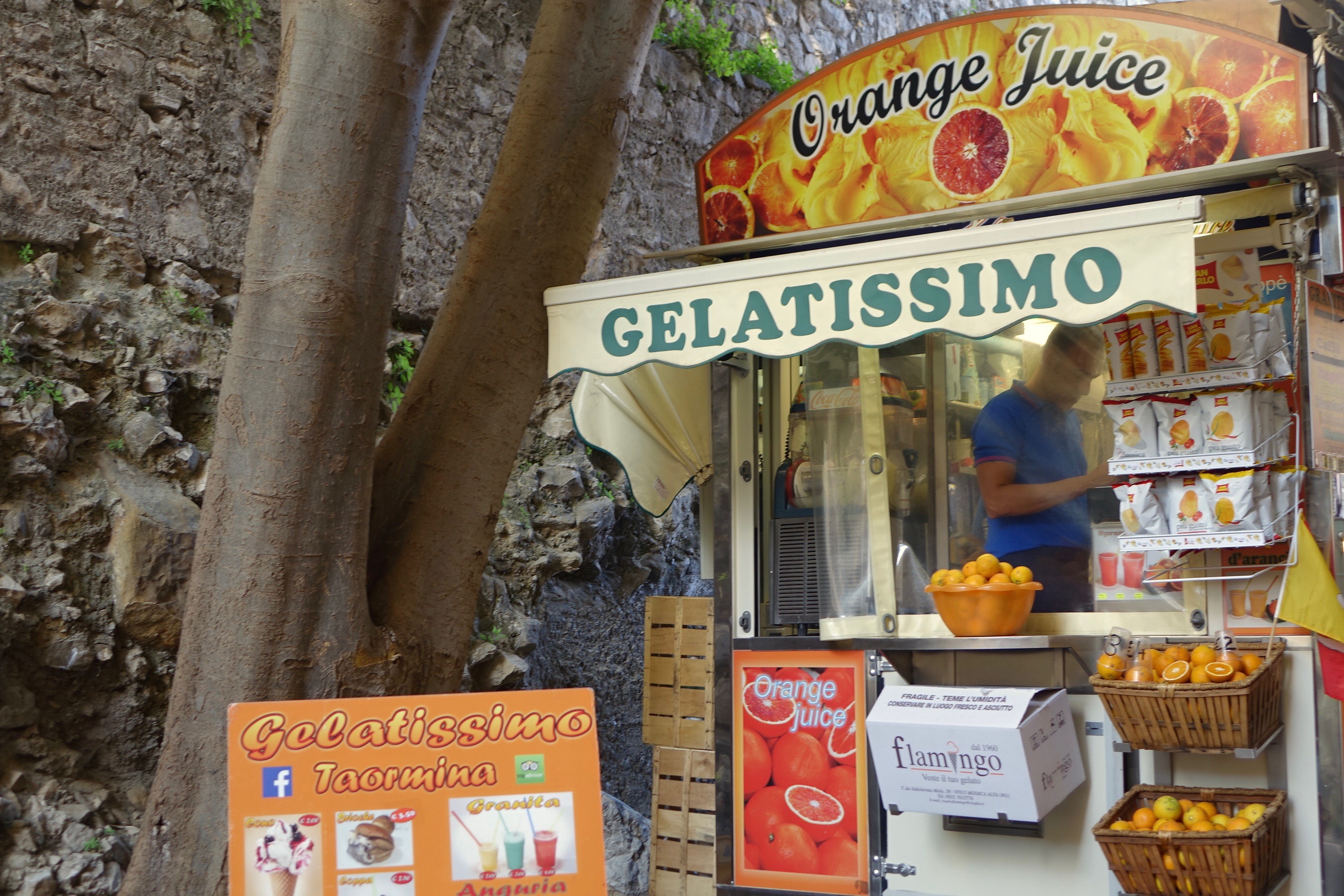 So the town of Taormina very quickly became our favourite Sicilian haunt, to enjoy an Aperol Spritz, to listen to the many street musicians frequently assembled, to watch as the milky afternoon sunshine bounced of glittering carts serving gelato and granita di limone, and to admire the breathtaking views which offered a vista across the long Eastern coast, sprawling hillsides and of course the mighty silhouette of Etna beyond. The photos on this page offer something of the wonderful atmosphere of Taormina. A place to see, and to be seen in.

It’s been a long and varied trip which has seen the Norms traverse the boot of Italy and cross the Med to the funny shaped ball the boot appears to be kicking – Sicily. Sicily is famous for various things. It has its juicy large lemons, its very hot climate, its ever omnipotent grumbling volcano, Mount Etna, and the very sinister undercurrent of Cosa Nostra, the Sicilian Mafia. Consulting their guidebooks, our tourist norms sensibly opted for the obvious sightseeing choice of Sicily – the stunning ruins of a Greek theatre in the little picturesque town of Taormina. There they were treated to an incredibly preserved ancient architectural artefact, as well as the beautiful view of the coast below, and an ever smoking, snow-capped Mount Etna lording over the landscape beyond. What they did NOT expect to stumble across was this sinister scene – two members of the Sicilian Mafia teaching one poor Norm the tragic lesson of what happens when you cross Cosa Nostra. Having stumbled across this ghastly operation, the Norms have made up their mind – it’s time to pack up their bags and head home for Blighty… if they get out alive, that is.