Manet: Not exhibited in his lifetime

Glancing through the current Manet retrospective, Manet: Portraying Life, at the Royal Academy, there is one consistent feature which is perhaps even more noticeable that the works themselves: How many of the paintings are labelled “Not displayed in his lifetime”. Why the Royal Academy is so insistent on spelling this out with such apparent alacrity is unclear. But what it demonstrates is that the majority of works comprising this so called “first ever retrospective devoted to the portraiture of Edouard Manet” are what I call “filler works” – paintings which are either unfinished or merely preparations for other works, and none of which the artist had ever intended to be exhibited for public consumption.

It is therefore with some unease that I looked upon these works, which the Royal Academy tries to pass off as paintings worthy of the not insignificant £15 entry-price, the cynic inside me recognising that what we have here is merely a means by which a show that, fundamentally, consists of one room’s worth of finished and accomplished works, is padded out to fill a much bigger space. And even that space is not filled particularly well.

In the second large gallery, for example, the Royal Academy make the slightly unfathomable decision to present Music in the Tuleries all on its own, spotlight upon it, surrounded only by blank walls. I could understand this kind of hang for a masterpiece such as Le Dejeuner sur l’Herbe, which almost single handedly changed the history of art (and sadly lacking from this show), but for this painting? Sure enough, it’s a skilled group painting, giving us a very realistic snapshot of modern day life one sunny afternoon, lacking in the previous contrived composition of the grand historical paintings which were favoured in the time Manet painted it. But the Royal Academy do not succeed in making any significant point worthy of this solo hang. And what’s worse, this painting belongs to London’s National Gallery, so visitors can normally walk up and see the painting whenever they like, without the crowds attracted to the RA, and for free.

But this was not the worse of it. The following gallery was hung, not with paintings, but with a chronology of Manet’s life, and a desk on which copies of the exhibition catalogue could be surveyed – why exactly I’m not sure: after all, isn’t it better to look at the paintings themselves when you have them in front of you?

But asides from the unpalatable cheek with which the RA filled it’s space and passed off the show as a great survey of Manet’s career, I also felt a deep sense of unease, not as a punter, but as an artist – because so many of these works are so clearly unfinished, unprepared for public consumption. I can imagine Manet now, turning in his grave, horrified at the prospect of these unfinished preparations being gazed at and criticised as though they were finished works. And all for the sake of a buck or too. 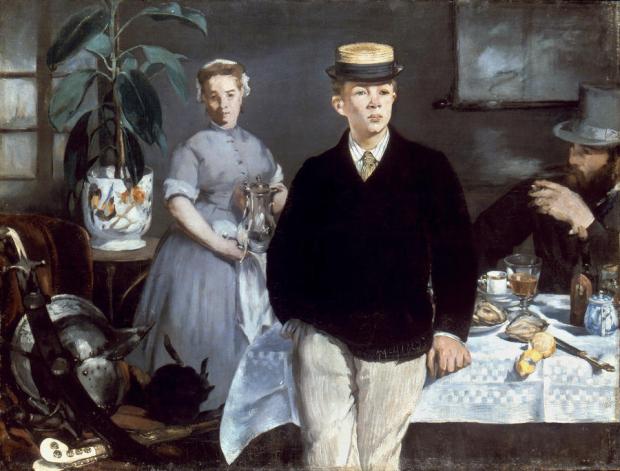 Madame Manet in the Conservatory (1879) 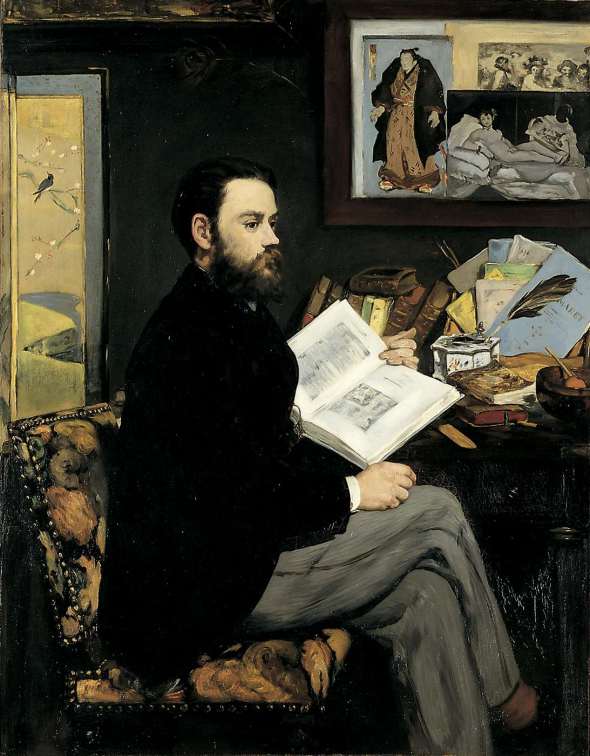 All that said, the finished works which are on show are masterful Manet’s, apt demonstrations of the artist’s skill at capturing real life, real characters and a sense of the time in which he painted. You get the portrait of M. Antonin Proust (not to be confused with the acclaimed author) – a dandy about town, a man proud and professional in his polished appearance; then there’s Suzanne Leenhoff (later Madame Manet), sat, happily contented in the garden of Manet’s home, her cheeks rosy and her gaze tranquil.

Then of course there’s Manet’s most infamous sitter of all: Victorine Meurent, who gets a whole gallery to herself in this show. While sadly, and very obviously lacking the two great masterpieces of Manet’s oeuvre in which she features (Le Dejeuner sur l’Herbe (although the Courtaulds inferior and much smaller copy is here) and Olympia), the paintings which are on show present the model with the confidence and audacity which must have attracted the artist to her – the wiley stare, straight out of the canvas, almost judging, daring the viewer to respond. Then there’s Victorine dressed as a street-seller, an accomplished character portrait in which the cherries held to her mouth appear almost as a provocation, a subliminal message inviting us to read a story into her steely gaze,  as well as the wonderful Railway portrait, in which the railings adjoining the railway appear to take centre stage, and the air of noisy, smoky, modern industry appears oddly juxtaposed with the apparent calm and tranquillity of Victorine and her sleeping puppy.

As a Manet lover (need I remind you of my Norm version of both Manet’s Le Dejeuner sur l’herbe and my juxtaposed Manet character Norms sat in Cappuccino Grand Café ?) I was of course familiar with many of the few finished works on show. But one thing that I took out of the show which I had not fully appreciated before was just how influenced Manet had been by Spanish art. Taking a trip to Spain, organised by Zacharie Astruc who’s portrait is also on display, Manet was very quickly inspired by Velazquez, who he saw as a master of painting black in all its surprising variety of shades, as well as other greats such as Goya and Ribera. Following on from this, one can really start to see the Spanish influence infiltrating into Manet’s work. Take the portrait of Rouviere as Hamlet for example, and look how it compares to this portrait by Velazquez. Then of course there’s the portrait of Victorine in the costume of an Espada, again sadly not included in the exhibition, an a portrait of Emilie Ambre as Spain’s favourite operatic diva, Carmen. As an artist much inspired by the Spanish golden age of art, I am well able to understand the effect that Spanish art must have had on Manet, helping him to surge forward as the revolutionary artist he was, in a claustrophobic French art scene which had yet to be struck by the poignancy of Spanish art.

The Tragic Actor (Rouviere as Hamlet) 1865

Victorine Meurent in the costume of an Espada (1862)

Of course it is difficult for us, well informed of the contemporary art which followed, to understand just how revolutionary Manet was as an artist, painting in the age when grand history paintings and allegorical images were all the rage. His paintings were so real, so unpretentious a snapshot of the life and the world around him, that many gallery goers took to attacking his paintings with umbrellas. Yet still Manet ploughed on, forging the path which impressionists and expressionists and the whole world of modern art pursued in his wake. This exhibition does not make any statement half so bold as the mighty oeuvre of Manet in itself, but putting asides the unfinished sketches, and concentrating on the completed masterpieces, those works of Manet which are on show are easily strong enough to make an impression all by themselves.

Manet: Portraying Life is on at the Royal Academy until 14 April 2013.