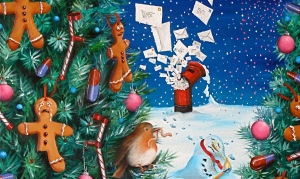 Following on from my recent Christmas tree posts, it seems suitable that for this week’s Sunday Supplement, I introduce you to the work: “Merry Christmas, Goodwill to all (Gingerbread) Men” (2008, oil on canvas). On it’s face, it’s a typical Christmas scene. Christmas trees hung with decorations and gingerbread men, snow scattered widely on a crisp winter’s night, Santa’s sleigh riding through the sky. But this is not a typical Christmas. Look closer and the images represented betray a sense of suppressed panic and bitterness. Off-centre, but at it’s heart, a gingerbread man with a broken right leg is iced with tears of apparent despair, while around him, he is surrounded by gingerbread men staring in his direction, their chocolate smiles still adhered mockingly to their faces. Also on the tree, candy canes are replaced with candy crutches, and where baubles should hang, pink ibuprofen tablets share branches with blue and red antibiotics and blue amitriptylene. On the tree perches the archetypal red-breasted robin, but he too appears menacing, caught in the act of murder of the still-living worm clasped in his beak. Between the two trees a further unsettling scene emerges, as a snowman struggles against the lit match which lays at his side, apparently placed there by whomsoever has left the footprints in the snow, footprints which betray a limp in the right foot because only the ball of the foot appears to impact the ground. Meanwhile above a British post box is cracked open, Christmas cards and other correspondence flying through the air, while above, a supposedly magical scene of santa and his sleigh is interrupted by the fall of one of his reindeers mid-flight. 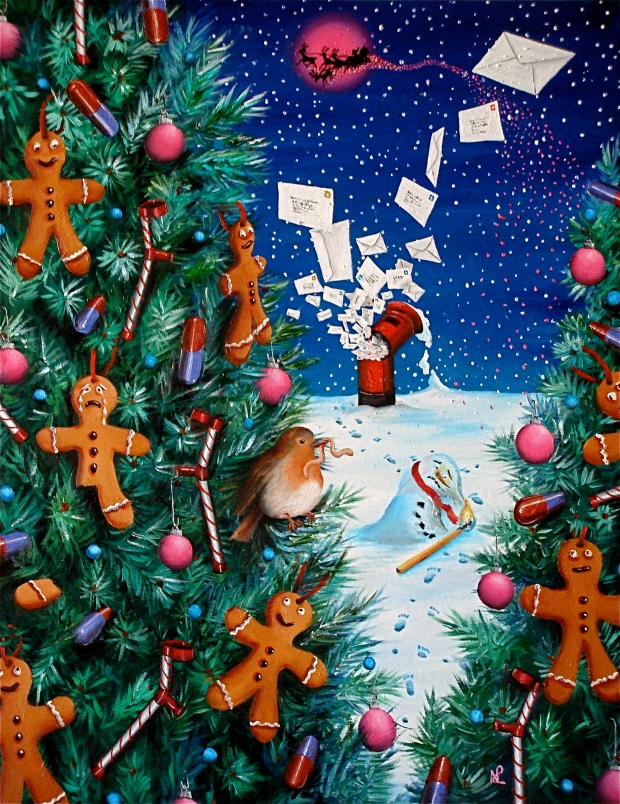 This is not the stereotypical scene of Christmas. It is in fact one of ten paintings which I created in the direct aftermath of a very traumatic road traffic injury of which I was the unwitting victim in May 2008. Just as I was walking past a very large structural concrete wall, a lorry crashed into it, causing the wall to collapse on top of me. I sustained severe crush fractures to my right leg as well as various other, more superficial injuries. I was lucky to be alive. What got me through the months of severe post-traumatic recovery was, and continues to be, my art. When I painted 10 paintings based on my accident, I was able to pour out my personal grief and frustration onto canvas. Each of the 10 canvases I painted represent a particular stage of my recovery. In this festive-themed painting, I recollect my first Christmas experienced after the accident and in particular my insecurity at being surrounded by a busy city at Christmas time, when I was visually and physically impeded by a very large illizarov external fixator which I was required to wear on my leg for 9 months. As I began to return to London society, I became more and more aware that people would stare at my leg in horror. They would never speak to me about my accident, but just stare – it made me feel like a leper. And all this at at time when society encouraged “goodwill to all men”. I expressed my feelings in this image of a gingerbread man, his leg broken, and all the gingerbread men around him staring, unfeeling, making his suffering all the worse.

At the same time I was ever conscious that my social life had been destroyed by my disabilities, an image I expressed in the broken letter box, its lost letters a sign of my broken friendships and lost social ties. Meanwhile the snow, the baubles and the crutches are all representative of the multitude of medication and medical aids I was required to take and use at that time. The foot steps in the snow are mine. Am I then an agent of my own self-destruction? Or am I facing up to the inevitability of life’s often bleak, stark reality?

For me, the accident was a distinct and painful reminder that we all take things for granted. I took my healthy right leg for granted until it was too late. I also took my mobility for granted. After two years on crutches and a life of mobility difficulties ahead, I now recognise how difficult life is for those with limited mobility, particularly in big cities and on public transport. I also realised that for people with disabilities, the last thing they want is to be looked at differently by other people in society. The purpose of my blog is not to lecture, rather it is to share the art and culture and beauty of life. But what I would say is: enjoy your  Christmas, your new year, and your life. Never take anything for granted, and if you see someone hobbling along a street with crutches or a bad limp, don’t stare. If you’re interested, just ask… If they’re like me, victims of accidents and disabilities would much rather talk about their experience than be marginalised because of it.