Brit art shunned by dOCUMENTA (13) – time for the UK to face up to our talentless contemporary art?

From June to September this year, the town of Kassel, Germany, will play host to the 13th dOCUMENTA exhibition. Established in 1955 by artist, teacher and curator Arnold Bode, the 5-yearly exhibition, whose first show featured the likes of Picasso and Kandisky, is self-proclaimed as a “key international exhibition of contemporary art worldwide”. Yet  the “worldwide” element seems to have missed out a key player from its compass: At dOCUMENTA (13), the UK is conspicuous by reason of British artists’ total absence from the show. Are they trying to tell us something?

I read an interesting article in yesterday’s Sunday Times written by  resident art critic, Waldemar Januszczak. He blamed dOCUMENTA’s apparent shunning of British artists on curators. He argues: “[t]he chief reason British art is mistrusted and hated abroad is that international curators disapprove of it. It isn’t clever enough for them. It does not espouse enough theory. It has a directness to it that makes their gaseous interpretations redundant. And it likes jokes, which they don’t”.

Good on Januszczak for being patriotic. But I can’t help but conclude that the real joke is British art itself. Contemporary art is a sticky wicket, a difficult often inaccessible manifestation of an artist’s attempts to find some new avenue which art has left hitherto unexplored. The trouble is, artists don’t have the luxury which the impressionists or the cubists or the abstractists did – these artists were emerging out of a rigid, regulated era of art, where paintings closely followed convention and artists feared exploring techniques beyond figurative representations of classical and biblical themes. Once artists began to break the mould, there were so many directions where artists could go, and so much they could do with the familiar canvas image, leading to an explosion of creativity and the creation of some of the world’s best loved works – the Picassos, the Van Goghs, the Matisses. Come the 1960s and things started to dry up. Jackson Pollock started to spray his canvases without any perceptible talent and Rothko painted vast works in a single colour. Little by little the need for actual artistic talent fell to the wayside as the singular requirement for “ideas” took hold until finally the hand of the artist was made entirely redundant: the art of the “readymades” reigned triumphant, right up until the monstrosity that was Tracey Emin’s unmade bed.

This would all be fine – call it a fad – if these artists weren’t taken so damn seriously. Damien Hirst has become a serial industrialist, a commercial tycoon all in the name of “art”. His works – pickled shark, rotting cow and polka dots aplenty (the majority of which he didn’t paint himself because, allegedly, he “couldn’t be ****ing arsed”) – are about to be given a huge solo retrospective at Tate Modern of all places. Meanwhile, Tracey Emin – who can’t draw to save her life – has been made Professor of Drawing at London’s Royal Academy, while her annual contribution to the RA’s Summer Exhibition make me want to weep. Yet still the visitors lap them up, buying each and every print of her childlike scrawl at lightening pace, just because they think, or rather they know, that they are making a good investment.

And herein, in my opinion, lies the problem. Compared to the romantic sentimentalism of countries like France, and the aesthetic-led inclination of countries like Italy, England has always been the boring big brother – the big industrialist placing economic concern at its core. We didn’t give birth to the airy luminescence of  impressionist paintings – but we did bring you gloomy scenes of the industrial North by Lowry. We didn’t give you empassioned El Greco or compassionate Da Vinci, but we did give you Lucien Freud – creator of the most expensive painting every sold by a living artist. We’ve always been led by money, by investment, by industry.

We don’t rave about Emin and Hirst because we think they are any good – we know about them because advertising tycoon Charles Saatchi has bought into them. And once Saatchi invests in an artist, they must be good right? Wrong. Saatchi is the man with the money. He isn’t an authority on taste and this is why British art is being shunned by exhibitions like dOCUMENTA. Because our artists make it big because of investment, not talent. All the integrity of our art has flown out of the window, as we gaze in apparent wonder at a whole gallery turned over to a lightbulb switching on and off. And why is Tate modern giving itself over to that Hirst retrospective this summer? – Why, because it’s olympic year, and they can pull in the punters, and the admission fee, of course. 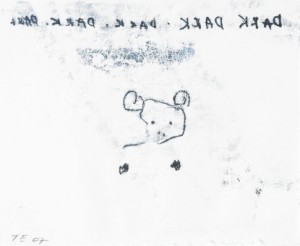 In conclusion, dOCUMENTA (13)’s shun of Brit art should make collectors and galleries in the UK stand up and think. Art shouldn’t be about money – it should be about talent; about discovering an artistic genius who will place British art on the map for centuries to come, long after the last scrap of that unmade bed has been swept away into the rubbish. But  how likely is that to happen so long as the powers that be stand to make a buck or too? I think you can answer that one for yourself.