The madness continues: Rothko and Munch sales break new auction records (and steal yet more works from the public eye)

Your eyes do quite possibly deceive you. This is not a photo of haphazardly applied paint samples on my living room wall in the consideration of a new mediterranean-inspired coloured scheme. Oh no. It is a painting, originally entitled Orange, red, yellow by american artist Mark Rothko and not just any painting either. This striped bodge-job of a monotoned canvas has the honour of reaching the highest price ever fetched by a piece of contemporary art at auction when it sold at Christie’s auction house last night for $86.9million. And this sale comes only a week after a pastel version of Edvard Munch’s The Screan set a new world record for the highest price ever paid for an artwork (of its era) at auction at a price tag of some $119.9. Did I mention that half the world is in a recession?

That’s not where it ended either. With total takings of $388 million, last night’s Christie’s auction was the most lucrative in history. I’m sure I’m not the only person who feels slightly ill about this. This hideous commercialisation of art works is the same force which drives contemporary artists of our age to be amplified and promoted as serious artists purely because a rich man has backed them despite their decided lack of talent. It’s a world which most artists would gawp at, appalled at the rich men lavishing their coin over an art work, not because of its merit, but because its artificially escalated price tag defines them as wealthy men with apparent cultural appreciation despite their probable inability to tell you a single historical fact about the artist they have just lavished millions on. After all, wasn’t it Rothko himself who, upon being awarded a commission to paint two major mural commissions for the Seagram’s luxury Four Seasons restaurant commented that he wanted to paint “something that will ruin the appetite of every son-of-a-bitch who ever eats in that room. If the restaurant would refuse to put up my murals, that would be the ultimate compliment. But they won’t. People can stand anything these days.” What then would he have thought about one of his works selling for such an absurd sum, and entering the collections of one of the richest men on the earth? He’d say the same thing no doubt: people can stand anything these days, especially when it gives them a bit of status amongst all their equally rich friends. 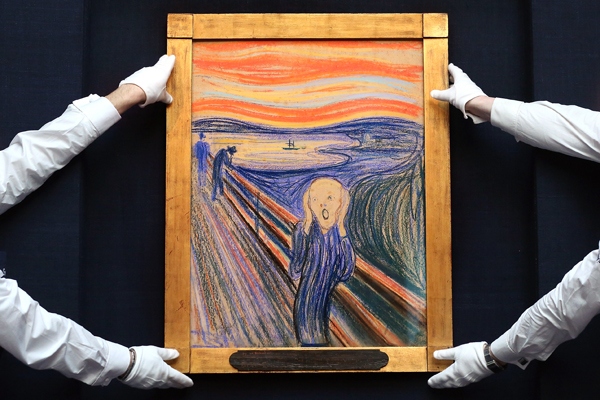 It’s not just about the price either. Munch’s Scream is thought to be making its way to the private collection of the Qatar royal family, and there it will join Cezanne’s Card Players sold to the Qatari royals for an equally absurd amount last year. What would Munch, whose painting represents a time of intense personal agony, or Cezanne, who spent his career agonising obsessively over finding a new way of representing the life of peasants and Provencial countryside, have thought about their works ending up in some dessert (and oil) surrounded palace in a part of the world where freedoms are suppressed, homosexuals are persecuted, and women are swathed in material, hidden from the view of men? Wasn’t the intention of the impressionists and post-impressionists and most artists for that matter to liberate through their art, to emphasise the lives of the ordinary people, be them whores or gays, women in the nude or men in emotional turmoil? I can almost hear Cezanne turning in his grave, no doubt somewhere near the Mont St Victoire, as I type. 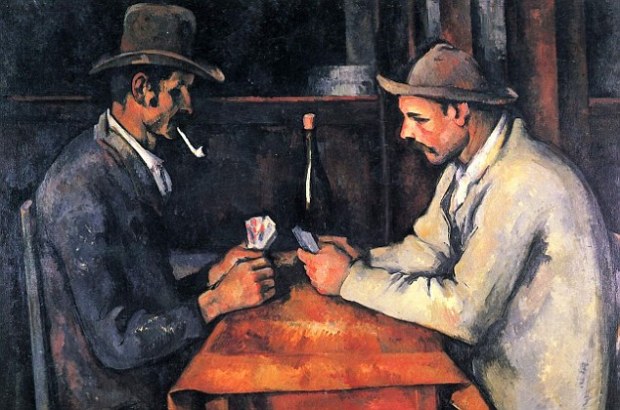 Cezanne, The Card Players – bought by the Qatar Royal Family

Worst of all is that the destiny of the majority of these privately bought paintings is to be hidden away in vast private collections, locked away from public view, as the increased secularisation and privatisation of the world’s masterpieces continues. And as the prices are pushed up, so too is the opportunity for a public gallery, most of them cash strapped, to ever acquire one of these great art works again. While the occasional private purchaser is good enough to loan their acquisition to a public gallery for public view, such as Picasso’s Nude, Green Leaves and Bust sold to a private bidder (thought to be a Russian oligarch) but currently on show at Tate Britain as part of its Picasso and Modern British Artists exhibition, most will never see the light of day again. Much like Renoir’s Bal du moulin de la Galette, purchased by Ryoei Saito in 1990 and supposedly never heard of from that day onwards.

It’s not like these paintings are stunning. Munch’s recently sold Scream was only a pastel study and not nearly as intense as the oil-painted original which thankfully remains on public view in Oslo. Rothko’s work on the other hand (for I hate to call it a “painting”) is a matter of personal taste, although I am sick of constantly being told that Rothko’s works are moving, incredibly important masterpieces worthy of my attention. Because they’re certainly no worthier of my attention than the blank canvases sat in my cupboard, and the only thing that moves me about them is why they are taking up valuable space in some of the most important contemporary art museums in the world. Anyway, I digress. No matter what my personal opinion is of Rothko, I recognise his place in art history, and once again I would prefer to see his works on public display for the contemplation of countless generations, than for the sole entertainment of a few Qatar Royals and a herd of camels.

In an ideal world, legislation would be passed forcing public galleries to have first dibs when an important work comes up for sale, at a heavily reduced price of course. But sadly this is not how the world works. Everyone wants to make a profit, and no more so than the auction houses of London and New York who revel in their press-grabbing broken records in the same way that White Star Line encouraged a speedier Titanic voyage in order to make headlines with the ship’s early arrival in New York. And we all know how that story ended, don’t we.