If you’ve read my last few posts, you’ll probably  know that the weather in London is bleak, persistently grey, and wintery cold. Sorry to go on, but to be fair, it has been like this since the beginning of April. So while we all gasped a sign of understandable relief to have a bank holiday weekend with one extra day off work, I for one did not relish the enhanced days of freedom alongside what looked to be a weather forecast stuck somewhere in December. So what to do with a wintery weekend in May save for staying in bed? Why, a good old exhibition of course.

London has been the European capital of exhibitions this year, from David Hockney for which queues formed an hour before opening and extended long past the Royal Academy courtyard until closing, to that Da Vinci spectacular at the National Gallery, for which queues not only spiraled around the whole of the West End, but tickets started reaching astronomical figures in the dark and dangerous world of the black market. We’ve had a bit of Picasso, and a whole show devoted to Lucien Freud, and now we have the master of marketing manipulation himself, Damien Hirst, installed at Tate Modern. But otherwise things are drying up a bit on the exhibition front, with some new shows promised towards the end of the year, but nothing compared to the blockbuster paroxysm which we had at the start (I’m not too sure why they decided to show the best stuff at the beginning of the year before the Olympics start… but owing to the ridiculous crowds experienced when it was just us Brits in tow, it’s probably a good thing that we didn’t have to compete with the rest of the world in the galleries as well). 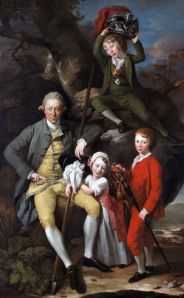 Henry Knight of Tythegston with his Three Children (1770)

So this weekend I had a choice of Hirst, which I’m trying to put off for as along as possible because he makes me angry, Nicholson/ Mondrian which looks a bit geometric, Turner, which is all very well but a bit samey, and this Zoffany chap at the Royal Academy. I’ve never heard of Zoffany before, but seeing as the Royal Academy is currently in a visitor loll, after the close of Hockney and before the opening of their annual car crash – The Summer Exhibition – I decided to give him a go.

Johan Zoffany (1733-1810) was born in Frankfurt, Germany, but moved to England at the age of 27. A keen socialite and excellent networker, he soon found himself the darling of the rich, influential aristocrats and profligate patrons of the age. Within four years he was enjoying the patronage of King George III and his wife Queen Charlotte, and was also the beloved of the Austrian Royals, being created a Baron by the Archduchess Maria Theresa at the age of 33.

Zoffany was a keen social observer. Through his connections in high society, and through his friendship of leading actor of the  time David Garrick, Zoffany was afforded countless opportunities to paint scenes enriched by the lively portrayals of contemporary society, from lavish theatrical productions of Shakespeare’s As You Like It and Macbeth, to complex portrayals of musician troupes, families in conversation and at play, large social gatherings watching cock fights in India and attending the Uffizi in Florence, and the Royal Family in both formal attire, and playing dress up. 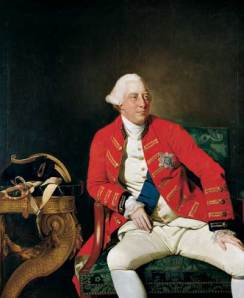 The distinctive thing about Zoffany’s works is this element of social interaction which he portrays. Unlike many portrait painters of his day, he did not paint head to toe, stiffly posed portraits. Rather he painted his sitters, both singularly, as couples or as large groups, interacting and in the course of “doing”. For this reason, his paintings are both wonderfully natural, and appear to represent a highly realistic snapshot on society of that day. This realism is of course vastly augmented by his meticulous attention to detail and his impeccably intricate fashioning of fabrics, furniture, interiors and objects.

The show starts with a number of mythological and allegorical pieces. One of my favourites was this, David with the Head of Goliath (1756). Some have asserted that the piece is a self-portrait, others disagree, but all comment upon what appears to be the purposeful homoerotic and phallic nature of the piece, as David’s sling hangs close to Goliath’s open mouth, while David stares out provocatively, holding what appears to be the glans of a marble phallus from an antique sculpture in his hand.

David with the Head of Goliath (1756) National Gallery of Victoria, Melbourne.

Of Zoffany’s various Court paintings, my favourite was this one, showing Queen Charlotte with her sons George, Prince of Wales, and Frederick, Duke of York. Asides from the cuteness of the young prices dressing up, one as Telemachus, son of Odysseus from Homer’s Odyssey, and the other in a Turkish costume, the thing that struck me most about this painting was the stunningly executed drapery of Queen Charlotte’s dress, painted with exquisite skill and attention to detail. 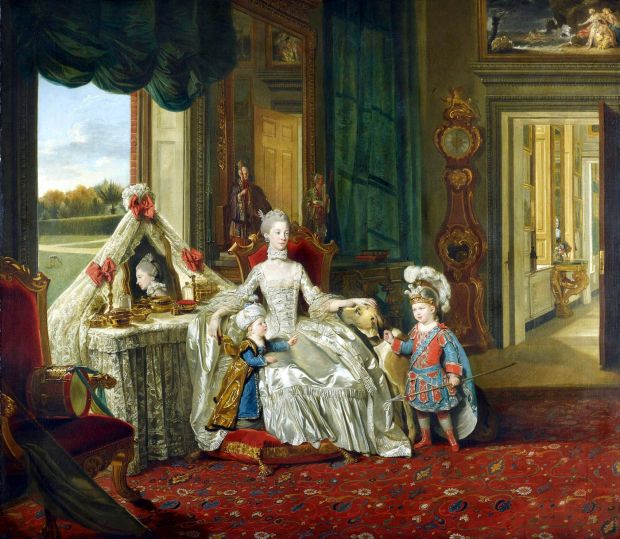 It wasn’t all high society that Zoffany observed. This painting, of an optician with his attendant, exhibits with great sensitivity two ageing craftsmen in a cluttered workshop filled with a plethora of materials each painted with intricacy and realism. For me, it is reminiscent of a an old Dutch interior scene by the likes of Vermeer, but with the added intensity and captivating quality held in the direct gaze of Mr Cuff the optician.

John Cuff and his Assistant (1772), The Royal Collection of HM Queen Elizabeth II

Zoffany’s real skill lay not only in social observation, but in his attention to detail. One of my stand out favourites of the exhibition was this painting, showing the library of Charles Townley complete with a large variety of sculptures from antiquity echoing the grand tour travels which were so fashionable in those days across continental Europe, and in which Zoffany too indulged when he went to Italy for a number of years at the behest of his patron, Queen Charlotte.

Finally I loved this group portrait of the Sharp family, a family of musicians who used to gather together once a fortnight to give performances. In the summer these performances were given by the Sharps on yachts, shallops and barges in what they termed “Water Scheems”, becoming so well known in doing so that they captured the attention of George III himself. This painting shows one such gathering on a barge on the River Thames – you can see Fulham Church in the background.

This exhibition just goes to show that sometimes it’s the old masters and past artists, although perhaps lesser known, but whose skill is nonetheless indubitable, that really shine. The Hockneys and the Hirsts of this world may pull the crowds, seduced and manipulated as they are by the media sway, but the real treasures are to be found in the oeuvres of the past masters, painters who worked at a time when skill was King, and an unmade bed was swiftly remade and freshened, not displayed in a gallery or proclaimed a masterpiece of art. We can always live in hope that such days of aesthetic appreciation and just reward will return. In the meantime head along to the Royal Academy. The show is on until 10 June 2012.