Yesterday I braved the crowds (which weren’t actually all that bad) and strove boldly into an exhibition which I have been trying to put off for a while (purely because I feared how it would ignite the great contemporary art cynic inside me and make me thoroughly moody for the rest of the weekend): I went along to the Damien Hirst “retrospective” (he is still very much alive and kicking) at Tate Modern, London. The exhibition, which I shall review fully in The Daily Norm tomorrow, wasn’t actually all that bad. One of the works which really captivated, was his four cabinets, irrelevantly entitled Spring, Summer, Autumn and Winter respectively, full of pills. You wouldn’t normally notice the humble pill. In fact generally speaking, when you’re having to take a pill, it invariably holds some negative connotation, whether it’s an illness-defying super drug or a good old vitamin D supplement just because your work (or country, as is the case with the UK) precludes you from getting enough sun.

When Damien Hirst put a plethora of different coloured, different sized tablets together, each meticulously displayed in a huge mirrored and glass cabinet, he called attention to the strange and unique beauty of the humble pill. Who would have imagined there were so many shapes and colours in amongst our medicines. Even the powder inside the capsules looked like a floral pattern from a distance as different beads of colour intermingled delicately.

All of this brought to mind a time when I too had to take so many tablets and pills that I was able to admire them with an artist’s eye, when a collection of multi-coloured pills started to look like a rainbow in my hand, until reality set it and I realised with horror that having been taking such a cocktail of drugs for so long, my poor liver would surely be irreparably damaged and my natural bacterial system zapped dry of any life or goodness.

My leg in the weeks following the accident

The time was 2008 and the three years which followed. It was in the aftermath of a terrible accident which blighted my life. When a lorry crashed into a wall as I was passing by, the full 10 ft concrete mass fell on top of me, crushing my right leg to smithereens. Only the quick reaction and medical skill of the trauma unit at St George’s Hospital in south London managed to save my leg, but in order to piece the leg back together, I had an illizarov frame attached to my leg. For anyone who doesn’t know what one of these frames is (I’ve enclosed as ungruesome a photo as possible of the leg a few weeks after the accident) it’s a series of metal supports which “fix” the broken bones from the outside with pins which insert the leg directly. I had to wear this complex frame for 9 months. It was the most horrific, painful period of my life, and convalescing with one of these monsters attached was by far the most frustrating and horrendous process of my recovery. I felt like a prisoner in this frame which could never be removed, and which caused so much agony.

In order to get through the long aftermath of my accident, I painted. The ten paintings which I completed at this time are amongst the most important of my current oeuvre because without the ability to paint, I don’t know how I would have survived. The painting I am focusing on today, and the one which Damien Hirst brought to mind, is this one, Convalescence Behind Bars: The Banoffee Blood-Press (2008, © Nicholas de Lacy-Brown, oil on canvas). 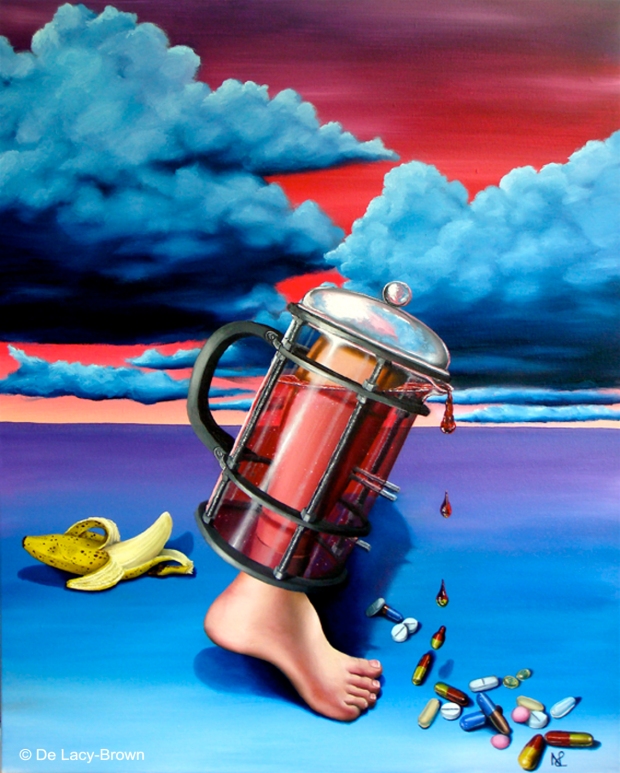 I thought the frame looked a bit like a French press caffetiere, so I painted it as such. But in this painting the frame presses not coffee, but blood. Blood which, as it percolates through the press reveals it’s true components – pill upon pill of the drugs I had to take at that time: Tramadol, Amitriptyline, Flucloxacillin, Temazepam, Paracetamol, Co-codomol, Ibuprofen, you name it, I was taking it. Then to the left, the humble banana, a nourishing food at a time when I could barely eat, and the fear of slipping, which would have smashed my bones to smithereens all over again.

So pills are beautiful, but they also represent pain. For me, I have a love-hate relationship with these colourful capsules, reminding of a time when my world was rocked by trauma, and a future in which my leg will suffer interminably. It’s a bit like my relationship with Damien Hirst’s work itself. More on that, tomorrow.