Salamanca: My Painting – Homage to a sandstone city in oil on canvas

It’s been two months since I returned from the golden glowing sandstone Spanish city of Salamanca. There was so much to inspire me when I walked those elegant historical streets. When I gazed, mesmerised through my hotel window onto the stunning baroque Cathedral, the sun setting upon its orange stonework, and cypress trees gently waving from side to side in the evening breeze before it, a painting came to my mind. I rushed to make a quick sketch which I still have on the back of a reservation print out for the restaurant we were dining at that night. My painting of Salamanca was to contain what to my mind was the essence of the city – a kaleidoscope of dappled, marbled oranges and golds in a landscape uniquely built from the local Villamayor sandstone, a city bursting with historical artefacts flowing from the dual powerhouses of church and university. It is a city which is elegant in its antiquity, and yet bursting with fresh new life from its greenery, its strong local life, the pull of tourism and the thriving university population which resides there. This was my inspiration and shortly after returning from Spain I set to work on a large 105 cm x 90 cm canvas. I finally finished  the work over the long Jubilee Weekend. And here, exclusively, is the result, as I present my first (non-Norm) painting of 2012… 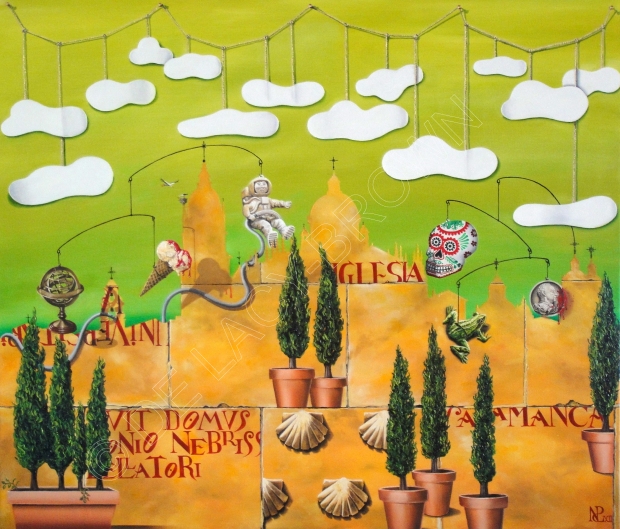 Dominating the centre of the canvas is a silhouetted skyline of the city, recognisable by the Cathedral spires and the intricate turrets, domes and baroque roofing of the nearby University. Rather than paint the detail of the buildings, I constructed the skyline out of a wall of villamayor sandstone bricks, in the same way that each building of the city is constructed. Those individual bricks act as a window onto different features of the city. On one brick you see the conch shells of the famous Casa de las Conchas, while on others, parts of the hand painted street letterings are featured, infamous for their historical use of pigs blood and olive oil.

In the meantime, out of the Cathedral and the university, the ironwork crosses become large mobile-like structures, inspired by the great maker of mobile art, Alexander Calder. On these mobiles hang various symbols of the city. The astronaut and the ice cream which are usually imbedded in the intricate plateresque facades of the Cathedral and the University’s famous sandstone frog are all featured, as well as the skull upon which the frog sits (my painted skull is inspired by the Mexican Dia de los Muertos celebrations for which houses and graves are adorned with beautifully decorated hand painted skulls like this one). Represented too is the tradition of learning at the University, embodied in the Orrery (one of which I bought while in Salamanca as a souvenir of the city) as well as the famous Plaza Mayor, represented by the infamous bust of Fascist leader Franco which can be found amongst the busts of Spanish rulers around the square, and the inclusion of which causes such controversy that it is regularly vandalised. My Franco too has been vandalised, but is that paint on his face or blood on his hands? Finally the painting is generously sprinkled with various groups of cypress trees, tidily placed in terracotta pots at various spots across the canvas as well as a curtain of clouds sweeping across a clear green sky. Ooh and look out for the little stork’s nest embedded amongst the spires of the cathedral – the storks are a customary feature of the city and do not appear to cause the residents any hassle – in fact some churches have baskets placed on top of their spires to aid the storks in building a safe and secure nest!

The Skull and the Frog

So there it is, and above, so you don’t miss the details, are more photos showing the various individual aspects of the painting. I hope you like the painting and, more importantly, let me know what you think! I’ve already started a new work, so look out for that over the coming months.