Rothko vandalism calls into question the accessibility of Britain’s art

Something about Mark Rothko’s famously monotone canvas, Black on Maroon from the Seagram Murals, looked different when London’s Tate Modern closed its doors yesterday: Sprawled across it’s semi-black surface were the freshly applied words of a savage vandal, a sensational act of vandalism on a painting worth millions, whose fresh drip marks bore a pertinent resemblance to blood – a vicious wound imposed upon this vulnerable and historical canvas. Reading “Vladimir Umanets, A Potential Piece of Yellowism”, this is the work of a blatantly narcissistic probably psychopathic criminal, who believes that he did no wrong. In fact, as he audaciously told the press today, he feels that his attack “adds value” to the priceless Rothko piece. 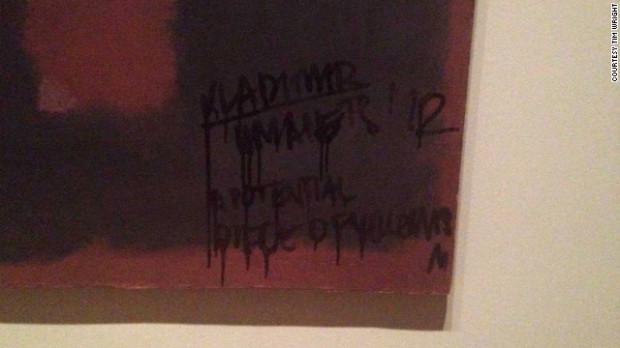 Of course, in truth, the homeless Russian is yearning for attention, and by writing this article, I am really not intending to give it to him. But what his act of violence does show in the stark light of day is 1) how vulnerable some of our most precious works of art truly are and 2) how lax the security is surrounding them. Considering a similar Rothko piece recently sold for £53.8 million at auction, the potential worth of the now vandalised piece would, if it was a gemstone, be accompanied 24/7 by a troop of armed guards. Yet in most of our galleries, the walls are literally dripping with works of similar or greater value, with only one sleepy security guard to protect a whole room.

But I do not intend to criticise the security efforts of Tate Modern and other galleries like it. Rather, I consider the security provided to be appropriate for the proper appreciation of art, without causing the visitor to feel intimidated, or kept at too far a distance to properly enjoy the work. And herein lies my problem. As more and more attacks such as yesterday’s Rothko outrage continue to occur, the tighter security will become, and the more difficult it will be for us, the art loving public, to enjoy these great works.

I have always loved the way one can wander, uninhibited, into the likes of Tate or the National Gallery and access those wonderful artworks with such ease and with such an intimate proximity. Take, by contrast, the Musée d’Orsay in Paris, home to some of the world’s most famous Impressionists works. There you have to queue out in the cold for a good 40 minutes minimum before you can get into the place, such is the stringency of the airport style security required before a visitor can gain access. It’s a horrible hassle, but is this now the future? You don’t hear of this grand acts of vandalism happening at the d’Orsay, nor the Louvre or Orangerie, where other such security measures are implemented.

By contrast here in London, I have often worried how in the National Gallery, they allow so many tourists to simply wander in, laden with rucksacks and all, baseball caps covering their faces, traipsing around the gallery in such numbers that it must be practically impossible to properly guard the countless priceless masterpieces on show all around them. And this is the place which itself has been the subject of such sensational acts of vandalism before, such as “Slasher Mary”, the suffragette, who in 1914 slashed the naked back of the poor Rokeby Venus by Velazquez, which still bares the scars to this day. Lessons have been far better learnt by the Dutch however, whose The Night Watch by Rembrandt, slashed in 1975, is now heavily guarded, and by the Reina Sofia in Madrid, who now keep Picasso’s Guernica under heavy guard, hoping to prevent a reoccurrence of the horrible defacing inflicted upon it by Tony Shafrazi when, in 1974, he painted “Kill Lies All” in red paint across it. 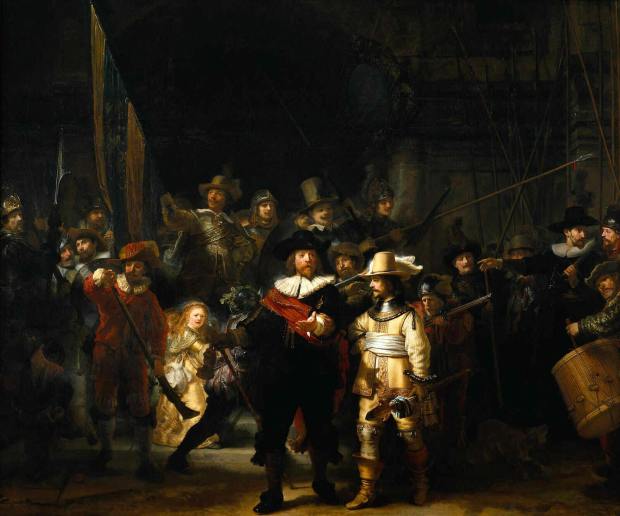 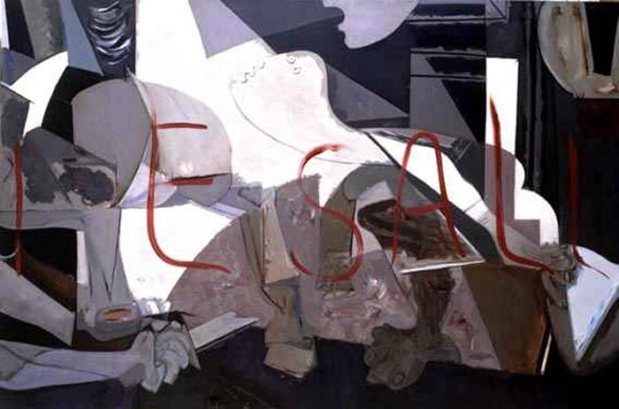 Whatever the security, these incidences of senseless, selfish vandalism will undoubtedly continue to occur every so often. But as inevitable as these attacks may be, so too will increase the inevitability that more and more, our most prized works will be locked away, kept behind a safety rope or bullet-proof glass, and visitors made to queue for frustrating lengths of time in order to get anywhere close. And all this just as gallery visits were at their highest figure for years. It seems nothing good can last forever – there will always be some idiot round the corner to ruin it all.