Back in 2005/6 when the Norms were born, my Norm-riddled imagination went all Last Judgment on me, and a diptych with all the foreboding power of the archetypal Renaissance altar-piece was the imploding result: Norms in Heaven and Norms in Hell. 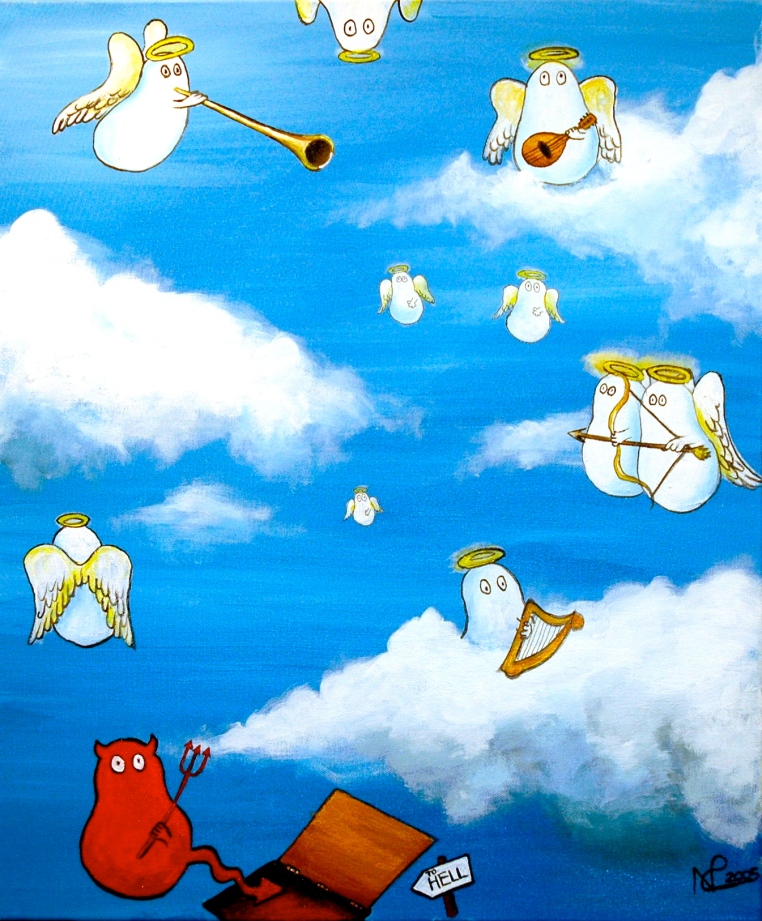 Norms in Heaven features 10 serene angels, floating amidst fair-weather clouds, radiant in their angelic glory, relishing in the celestial music flowing from the golden instruments of three, while for two, the propagation of love is their priority, one one-handed Norm angel holding cupid’s bow, while the other helps to pull back the arrow in readyness for its launch into Elysium. However, even in this scene of paradise, there is always a foreboding reminder of what awaits those whose sins make them unworthy for the great pleasures of this joyful nirvana… the gateway to hell, guarded in all his intrusiveness redness by a demon Norm, a portentous warning of the visions of horror awaiting the viewer in the second half of the diptych… 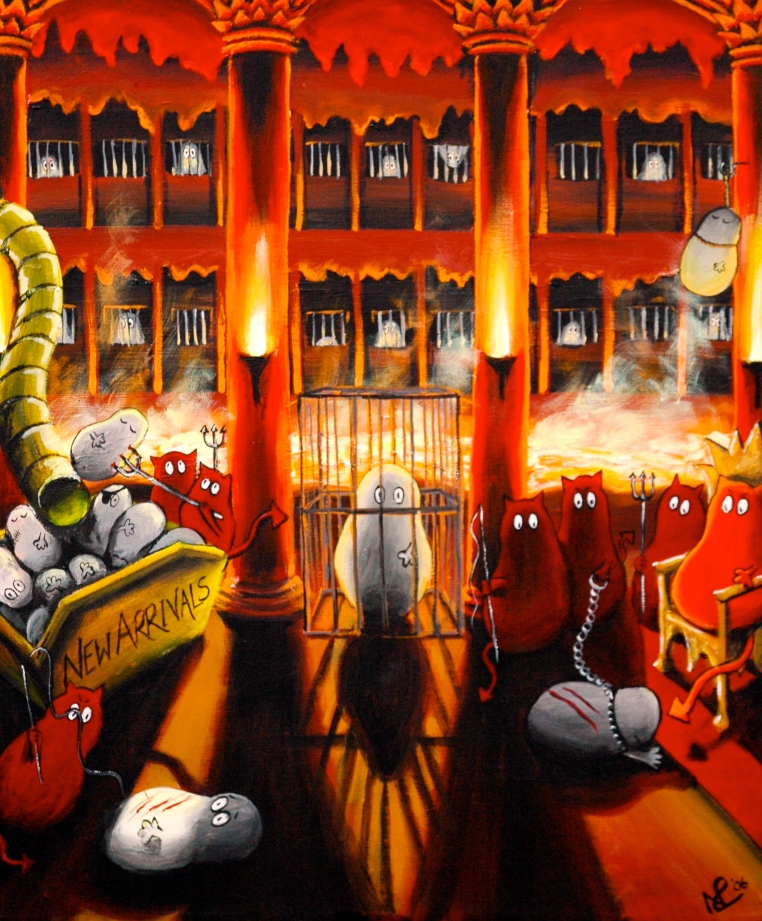 For its audience of innocent little earthly Norms, Norms in Hell would be a shocking warning of the fate that awaits those who do not behave. For those Norms whose sins have necessitated a descent into the abyss, their arrival is through a rubbish shoot where their dead, rotten souls pile up in a New Arrivals skip. From there, demon Norms, eager to torture their newly arrived victims, spear the Norms through their side, before awakening their souls to a life of eternal damnation. Thereafter they will be subjected to the most terrifying of horrors, such as the scene of flogging on the left, being hanged from a column and left to roast in the fires of hell, or being caged up only to await an audience with Satan Norm himself, whose punishments deal the deepest and most appalling blows of all. Meanwhile the scene is dramatically lit by the glow of a lava river flowing behind, while on the other side of this burning deluge, further damned souls can be seen in their torment, behind bars, awaiting further retribution for their depraved and iniquitous lives.

Detail from Signorelli's The Damned are taken to Hell

The subject of heaven and hell, purgatory and the last judgment has been illustrated on countless works of art over the centuries. The paintings, usually to be found in religious institutions or commissioned by devout religious patrons, were a reminder for their audiences to behave during life. As part of their method of pre-emptive intimidation, the scenes from hell were usually vividly shocking in their depiction of perdition, thus acting as a strong deterrent against any kind of sinful behaviour in life. Consequently, some of the paintings and frescoes, particularly arising out of the Renaissance, which depict hell are amongst the most engaging and thrilling works of their genre, while the depictions of heaven, in their serenity and calm, are perhaps a less fascinating affair. 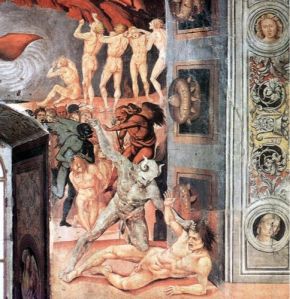 Detail from Signorelli's The Damned are taken to Hell

One of the best depictions of the last judgment, in my opinion, is the sensational fresco by Signorelli which can be found in almost perfect condition in the Chapel of the Madonna di San Brizio in Orvieto Cathedral, Italy. I was lucky enough to be able admire these frescoes pretty  comprehensively when I briefly studied art history on my gap year ten years ago. The frescos, which were painted between 1500 and 1503, are stunning for the ingenuity of their imagery and the complexity of their composition.

In The Damned are taken to Hell and received by Demons, Signorelli has gone to the extremes of his fantastical imagination to portray a cataclysmic vision of damnation, where human flesh is all entangled in amongst demons which, in near human form, are depicted in various shades of decomposing flesh, literally feasting upon and attacking their newly arrived victims.

Signorelli's The Damned are taken to Hell

By contrast, The Elect in Paradise is a more sedate affair, showing the lucky few who have been elected in heaven staring up at the various music-making angels who fill the skies.

Detail from Signorelli's The Elect in Paradise

However, my favourite of the frescos deserves it’s own mention, for its utterly unique and fascinating imagery: The Resurrection of the Flesh shows people, risen from death, being brought back to life. With some effort, they are shown climbing through what seems to be a thick blanket of cloud or a marshmallow like ground. Skeletons become redressed in flesh, and humans, in various positions (and thus showing the virtuosity of Signorelli’s representation of the nude) become acclimatised with their newly regained flesh. 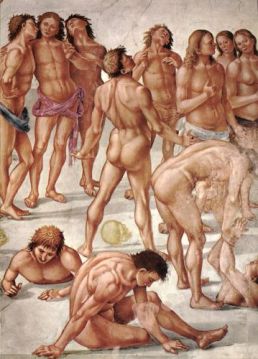 Detail of Signorelli's Resurrection of the Flesh

Detail of Signorelli's Resurrection of the Flesh

The next artist, whose depiction of paradise v hell cannot go without a mention, is Hieronymus Bosch and his masterpiece and star of Madrid’s Prado Gallery, The Garden of Earthly Delights.

Bosch, The Garden of Earthly Delights

The painting is an immense triptych exploring the themes of paradise, pleasure and retribution. Rather than paint a straightforward heaven/hell comparison, Bosch explores a kind of paradise on earth, a garden of earthly delights which is basically a romping orgy of sexual and gastronomic pleasures, as nudes play, copulate, eat, drink and engage in all sorts of bizarre and wonderful activities. On the left of this earthly paradise, is a rather calm tranquil scene depicting the Garden of Eden, while the panel on the right, by direct contrast in both subject matter and colour, is Bosch’s most stunning masterpiece of all… his depiction of hell, a terrifying and uncompromising scene of devastation and damnation. In a single, densely packed and detailed scene, cities burn, the damned are tortured, and eaten, demons roam menacingly, and mutated hybrid animals feed on human flesh.

The triptych as a whole is presumably meant to be viewed chronologically, from creation, through to human’s pursuit of pleasure and sinful self-indulgence, and the descent to hell that results. In all three panels, but in the earthly pleasure panel and hell in particular, the work is literally bursting with such incredibly imaginative and surreal detail that the work stands out as a masterpiece of the last millennium. Who else, circa 1500, would think of painting such magical details such as a man carried inside the shell of a mussel, a bird headed devil devouring human corpses and excreting them into a bubble-like latrine beneath him, a man formed from a rotting tree inside of whom a den of thieves and gamblers lie in wait, and two human ears holding a dagger? The brilliance of this work is beyond doubt. The only problem, from experience, is that when you are stood in front of it, it is easy to become overwhelmed by the detail which exists in a comparatively small area. Like a Diego Rivera mural, this is the kind of work which needs a whole book devoted to it, so you can relish in each tiny detail in turn. In homage to those details, I’ve included just a few in the gallery below.