My love affair with Yorkshire stained glass started in St Helen and the Holy Cross in the little Yorkshire town of Sheriff Hutton. I was attending the wedding of my dear friend Celia and her husband to be, Tarquin. Asides from being dazzled by the highly unsurprising beauty of the bride, and the elegance of a church bursting with autumnal flowers, berries and warming candles, I was mesmerised by the occasional burst of multi-colour flooding into the little stone church through its wonderfully intricate stained glass windows. Depicting biblical tales with exquisite attention to detail, I stared in wonderment at this unexpected artistic gem set within the ancient walls of very small local church. 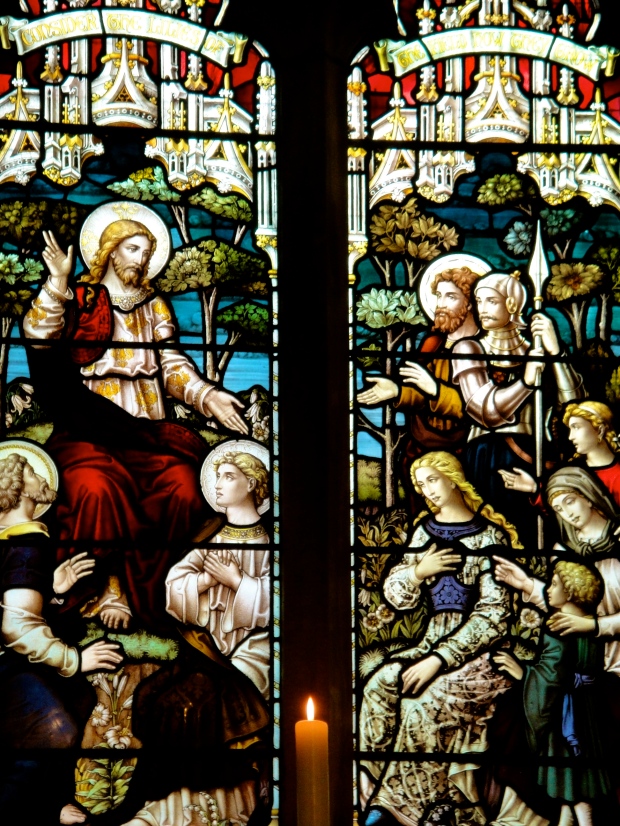 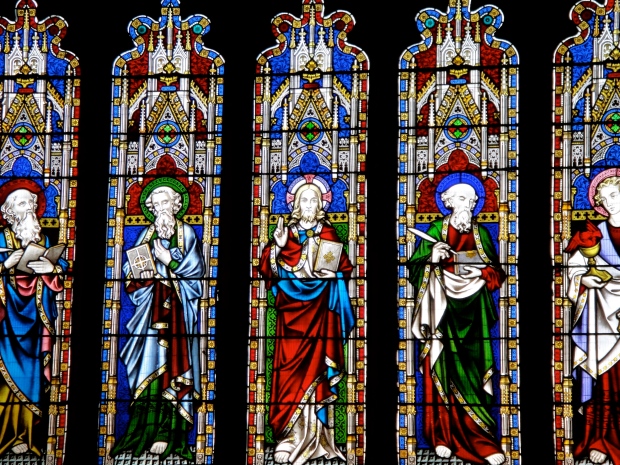 But this was only the start. The following day, drunk on the exuberance of the blissful wedding celebrations of the previous day, I stumbled into the cobbled idyllic streets of York’s medieval centre. The town is a chocolate-box paradise of Dickensian British charm – there were little teddybear shops in creaky crooked houses, oak-framed windows glittering with Halloween and Christmas paraphernalia, and the world famous Betty’s tearoom, with its delightfully old fashioned shop downstairs, manned by two perfectly polite, tie-wearing shop assistants, straight out of Victoriana. But wherever you go in this picturesque little town, the imposing gothic structure of the immense York Minster is never far away.

Having had our fill of Betty’s tea room, and of course a requisite Yorkshire pudding, we headed straight for the Minster. The Minster is an impressively sized and decorated Cathedral, and one of the largest of its kind in Europe. It is in  fact the second largest Gothic cathedral in Northern Europe, with its present architecture dating back from 1230. Unsurprisingly, the cathedral is rich in its gothic decorations, its medieval carvings of creatures and kings, its shrines and chapel, its intricate choir stalls and equally sumptuous organ pipes. But above all things the Minster is famous for its exquisite stained glass, and of those there are many. 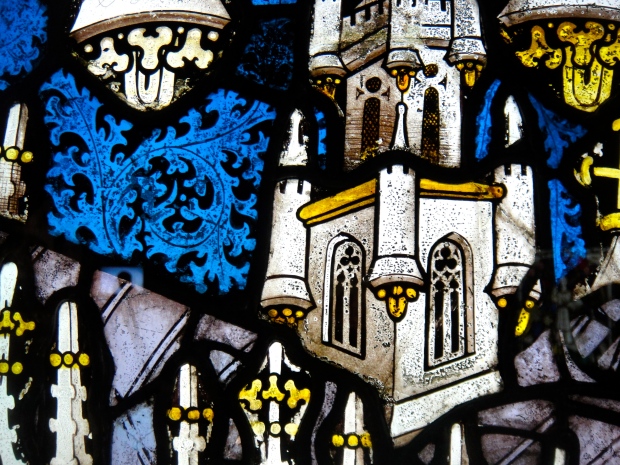 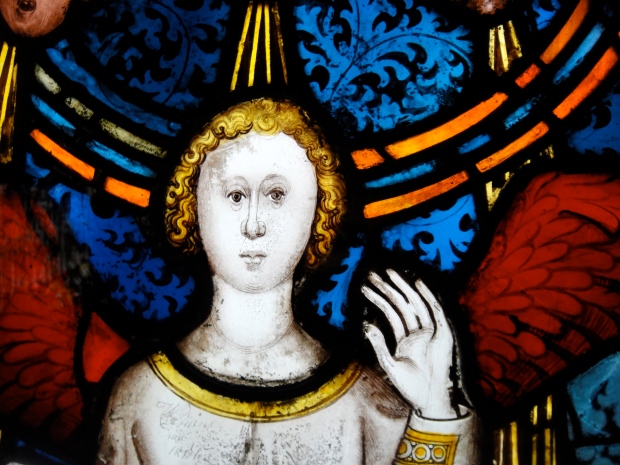 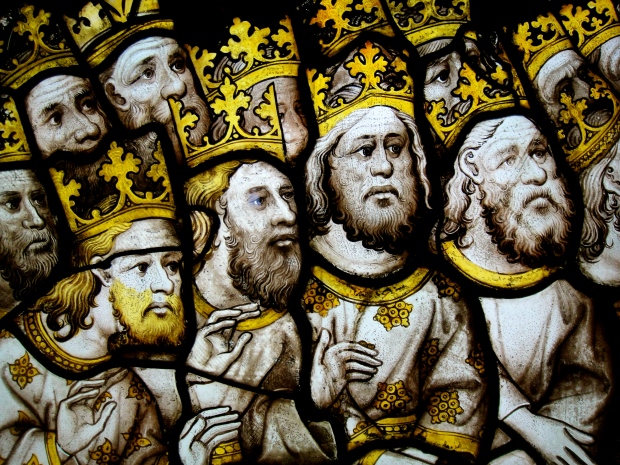 Upon entering the Minster, we initially gawped at the entrance fee – £9, not including a tour of the tower, although owing to the gloom which had descended upon the city, we thought it was probably safe to give that a miss. Having bought our tickets, and swallowed the cost, we began to understand why the admission price was so high. Not only is the cathedral brilliantly preserved, with interactive displays for the visitor and a host of curiosities and architectural splendor to view, the Minster is undergoing a major renovation of those very same windows for which it is so famed. 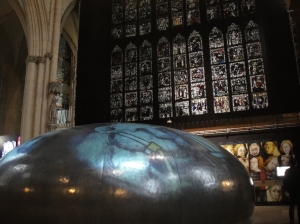 The windows, which are the largest examples of surviving medieval stained glass windows in the world, are a spectacular display of medieval craftsmanship. Some 2 million individually painted pieces of glass make up the cathedral’s 128 stained glass windows which need constant renovation and cleaning in order to preserve the masterpieces for future generations. However, so often it is impossible to fully appreciate the true intricate beauty of a window on this scale, from the ground. On our visit however, we were in luck. Of all the windows, the most stunning is the Great East Window, the likes of which was undergoing renovation when we visited. Usually this would be cause for complaint, but not so on our visit – rather, having opened a new “orb” to display freshly renovated panels from the great window, we were afforded the invaluable opportunity to study the intricacies of the windows, lit from behind, in all their detailed beauty. 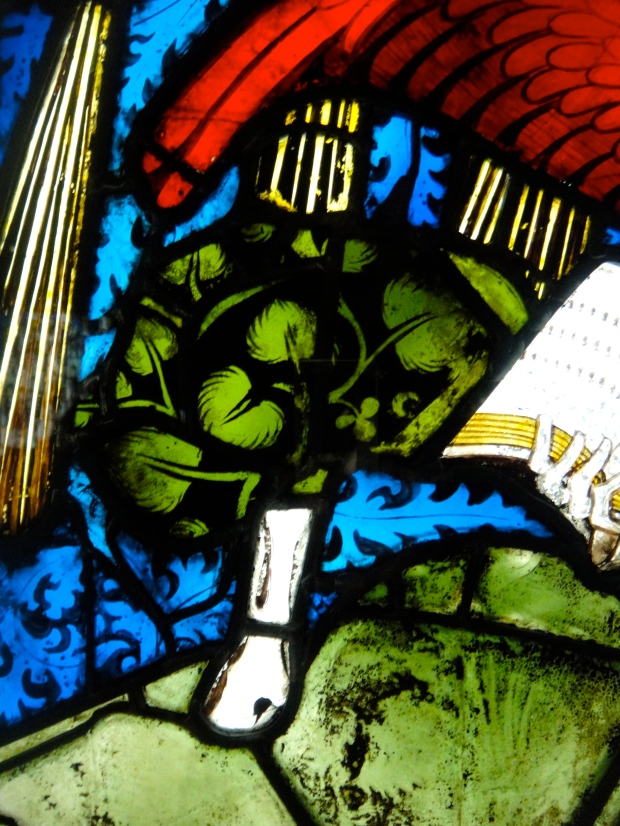 The results can be seen from these photos I took inside the orb. It’s hard to believe that these intrinsically contemporary images stem from the medieval period, with their gorgeous details such as leafy damask backgrounds, radiant angelic faces, and the use of vibrant coloured glass which, when cleaned, gleams to stunning effect. I was so overawed by the beauty of these windows that I felt compelled to devote an entire post to their glory – how sad that the entire window cannot always be so admired in its details. But without a stairwell allowing visitors to reach the top of the window and the various levels in between, there will inevitably be beautiful panels such as these which will forever be confined to the sky-like heights of the cathedral, viewed in detail only by those charged with the window’s renovation. How fantastic then was this opportunity to see a few of those panels up close. Suddenly that £9 entrance fee seemed excellent value. 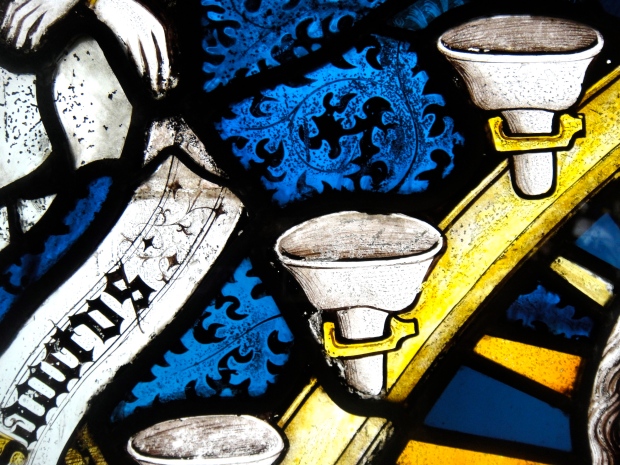 The orb will remain at York Minster until 2015. The restoration of the Great East Window is expected to be completed by the summer of 2016.