Tate Modern has gone all polka dot – and I’m not talking about the impending arrival of Damien Hirst. No, no, another artist, similarly best-selling and awfully contemporary, but perhaps less readymade, and stemming all the way from Japan claims that she made polka dots her artistic trademark long before Hirst made the colourful dots his personal emblem with LSD . And she’s probably right, because for Yayoi Kusama, the eccentric, self-admitted mental-institution resident and world famous artist who is the subject of Tate Modern’s latest retrospective exhibition, the polka dot was not just emblematic of her early and continuing artistic career, but represented the hallucinations looming inside her troubled head. 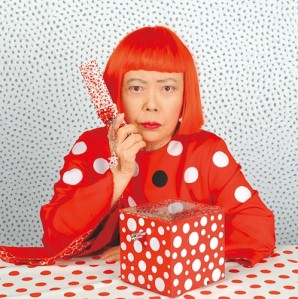 Welcome to Kusama world, a world where an artist’s output is not the product of imagination, but mental torture. Famous for her immersive installations, phallic representation, neon-bright colours and those all-embracing polka dots, Kusama is acutely successful in being able to welcome the viewer of her art into her slightly disturbed, turbulent world. This is, of course, aided by “immersive” installations, such as her work Aggregation: One thousand boats show, where the viewer becomes participant in the work as we are able to walk into a room covered floor to ceiling with the same repeated image of the phallus-filled boat before us. The effect is the same in I’m here but nothing, where an everyday sitting room is covered, all over, with neon polka dots, and, in the rather striking climax of the show, Infinity Mirrored Room – Filled with the brilliance of life, one walks through a room covered with mirrors and filled with a colour show of different LED filled lights – the effect is an infinity of light which is stunning for the senses. Nevertheless, it does feel more fairground than art gallery, as beautiful as it may be. 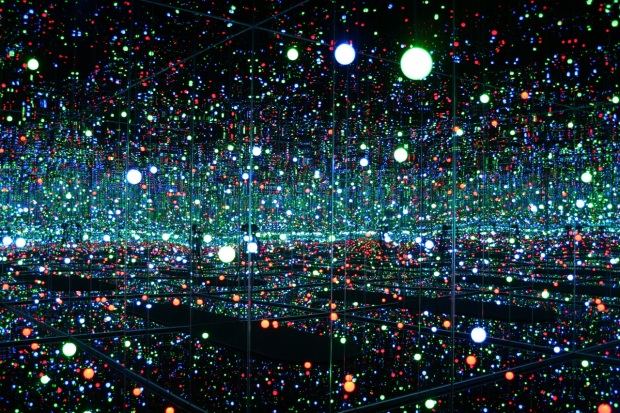 Allegedly, all of this dottiness (both in mind and matter) began when Kusama was a young girl, when the image of a flower began to repeat itself before her eyes. Yayoi Kusama said about her 1954 painting titled Flower

One day I was looking at the red flower patterns of the tablecloth on a table, and when I looked up I saw the same pattern covering the ceiling, the windows and the walls, and finally all over the room, my body and the universe. I felt as if I had begun to self-obliterate, to revolve in the infinity of endless time and the absoluteness of space, and be reduced to nothingness. As I realized it was actually happening and not just in my imagination, I was frightened. I knew I had to run away lest I should be deprived of my life by the spell of the red flowers. I ran desperately up the stairs. The steps below me began to fall apart and I fell down the stairs straining my ankle.

From this point onwards, Kusama started to cover everything with polka dots: walls, ceilings, floors, furniture, household objects, naked models, and herself, all representing the world as she sees it through repetitive and persistent hallucinations.

Even when the exhibits do not give you cause to “immerse” yourself within Kusama’s way of thinking, the art work on show betrays the extent of her troubled mind. Another installation of household objects, Accumulation sculptures, are presented bursting all over with an eruption of phallic protrusions. I found these works to be quite sickening – the textural surface of the resulting objects made me feel rather queasy, much like I would feel if I was looking at the surface of skin erupting with blisters. It was also possible to feel the magnitude of her repressive repetitiveness in her famous “infinity net” paintings – vast monotone canvases painted repeatedly with a single arc pattern, representing the loops of a net. These works are rather intrustive in their scale and claustrophobic in their illusion to an unrelenting and obsessive mental torture.

Personally my favourite works of the exhibition were probably her early paintings, in a variety of mediums from watercolour and gouache to charcoal and oils. Her 1949 work Lingering Dreams betrays the same sense of traumatic perturbation pervading all of her work, but is nonetheless beautifully painted – like an acutely depressed Van Gogh sunflower, the life and vitality strained and stretched out of it. I also rather enjoyed Kusama’s latest works, large multicoloured acrylic canvases, painted in a studio adjacent to her resident mental institution. The works appear to reflect a period of comparative contentment in Kasama’s latter career, although they continue to betray an element of obsessiveness and their bright colours are frequently harsh and discordant.

I left Kusama’s show feeling a little tired. In immersing yourself into Kusama’s mind, you tread a mental journey which is not always comfortable, and often overly stimulating on all the senses. It did not impress upon me in the way that a greatly skilled figurative artist has the power to do. Instead it caused me to reflect upon the cognitive expressions of a high-wired eccentric lady. There is much reason to argue that some of this work, particularly the light installations, are not really art at all – but I’m not going to get into that today. For me, the greatest disappointment came upon entering the Tate shop and discovering no crazy polka dot embellished Louis Vuitton bags for sale – this was, after all, a Vuitton-sponsored exhibition. Having said this, my disappointment may not last long. As I write, I learn that Kusama and Vuitton are joining forces for a collection due out in Summer 2012… so it looks like the madness will continue, even into the finest echelons of Paris couture. Vive le polkadot!

Looking a bit like a snake surrounded by her creations... Yayoi Kusama in the installation Yellow Tree Furniture (2010). Photo : Y.Kusama Studio/Half Reiff