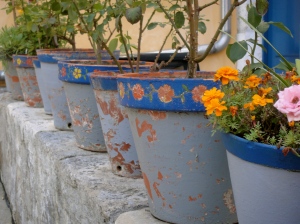 On 1 November 1755, the shape of Lisbon was changed forever. 20 churches collapsed, fires ravaged the city, a gigantic tsunami washed up on the shore causing widescale flooding, an estimated 15,000 Lisbon residents lost their lives and over half of the urban landscape was reduced to rubble. The cause was an earthquake so large that it is now recorded as one of the deadliest in history, an earthquake which was felt as far away as Italy but for poor Lisbon, the fabric of the city was literally raised to the ground. 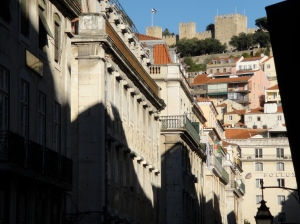 The Alfama and the Castelo seen from below

Recovering from that destruction, the city was rebuilt, and the large swathes of grid-patterned streets which fill the centre of the city today are the work of the Marquez de Pombal and the major reconstruction of the capital. However to the East of the city is one noticeable exception. Up on its hill, above the low lying centre, the area of Alfama missed much of the destruction. Many of the buildings survived and the flooding never got this far. What results is a true slice of Lisbon history, an area which, as the name suggests has Moorish origins from the city’s early beginnings, and whose twisty compact streets and steep stairways retain the Moorish layout and the medieval construction of what was once the whole of Lisbon up on its commanding hill. The Alfama is less grand, for sure, than the wide boulevards and piazzas below, but utterly idyllic in its picturesque imperfection, its windy wobbly streets, its cracking facades and cobbled paving, its coloured houses and chipped ceramics, its flower pots, laundry hung streets and plant-packed balconies. In the Alfama one felt the true heart of Lisbon, a little dilapidated treasure trove of pictorial and historical delight. And that was exactly where we headed today. 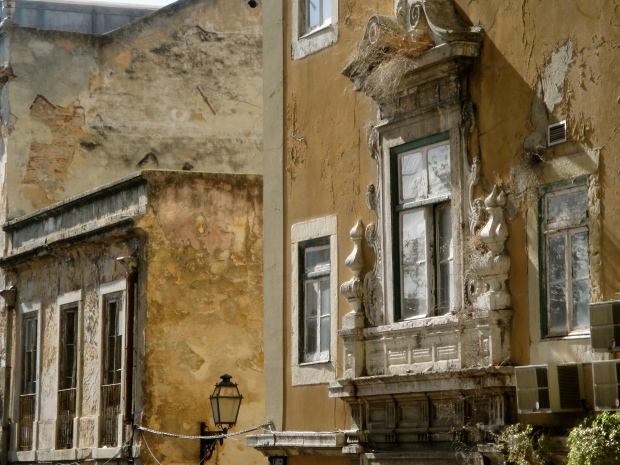 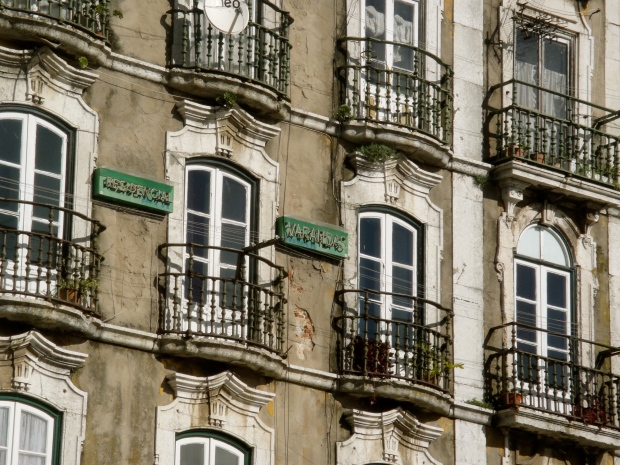 The Alfama was a joy to walk around. We had no itinerary, no predetermined destination, other than to gradually climb the winding streets upwards until reaching the Castelo de São Jorge, the castle which crowns the top of the hill. On our way we passed Sé, Lisbon’s principal Cathedral – an impressive castle-like structure from the outside, although rather gloomy on the inside; we saw the Casa dos Bicos, the conspicuous property with diamond-shaped stones adorning its facade; we marveled at the stunning views over the Eastern Tagus from the Miradouro da Graça; and we dropped into little antique shops, tiny stores crammed with ceramic cockerels, port and postcards and little chapels branded with ancient blue and white painted tiles. 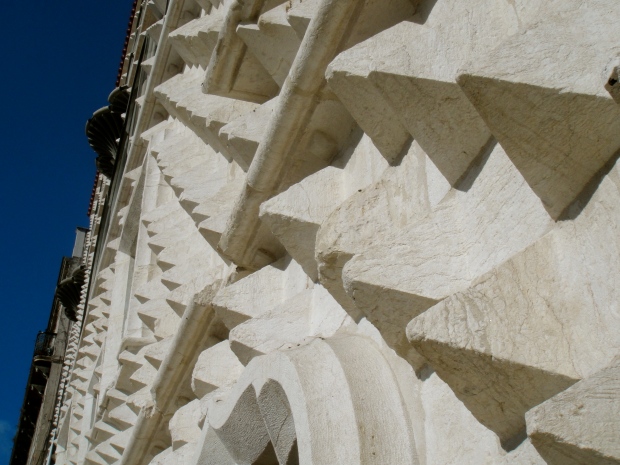 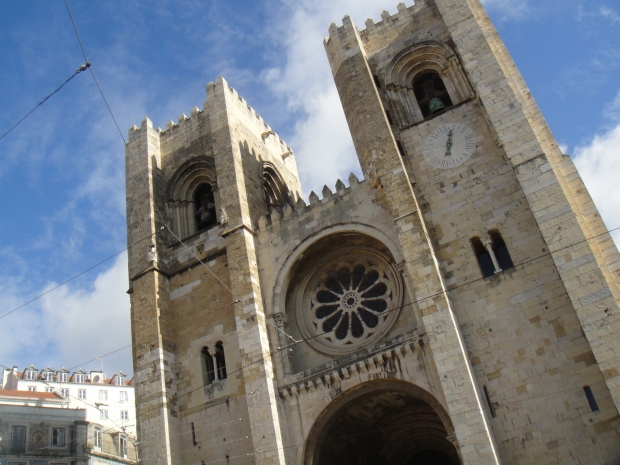 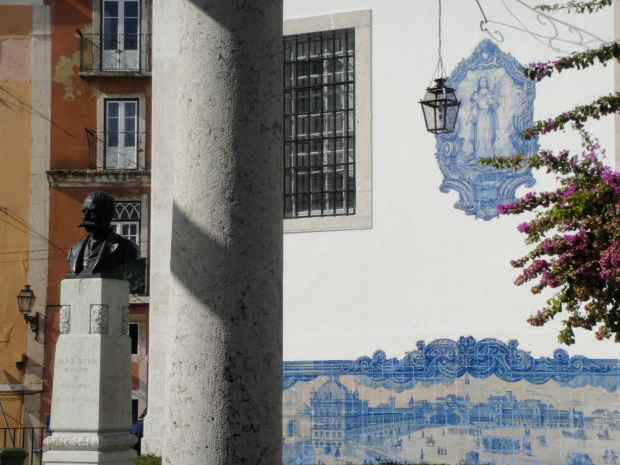 The blue and white tiled facade of Santa Luzia 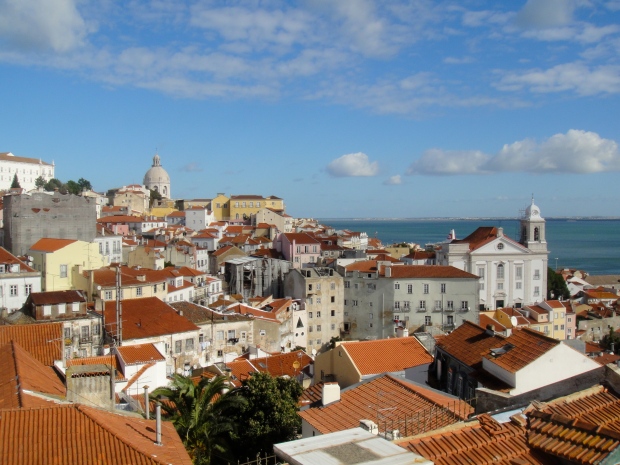 View from the Miradouro da Graça

Eventually, as promised, we found our way to the Porta de São Jorge, the imposing castle gate which leads, not onto the main Castelo de São Jorge directly, but first into the ancient residential district of Santa Cruz, a tiny maze of little streets, strung with washing and adorned with pots and flowers, all of which is packed into the castle walls of this ancient citadel. We couldn’t resist exploring these streets, and although the labyrinthine quality meant that we managed to go round in circles on at least 3 occasions, we did manage to find an extremely charming little wine bar, Instinctus (Rua Santa Cruz do Castelo) where the equally charming owner treated us like guests in a family home, preparing traditional but beautifully presented, fresh and delicious bacalao (cod) and sardines, and recommending that all important Portuguese wine – a merlot grape grown in the south of the country. It rushed to our heads like a tidal wave of silken chocolate. It was delicious. 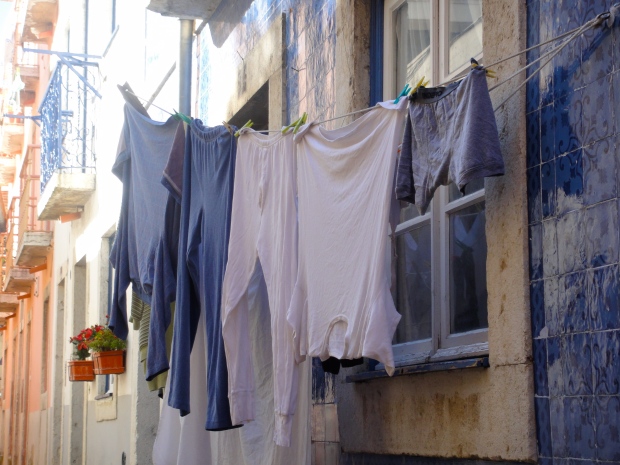 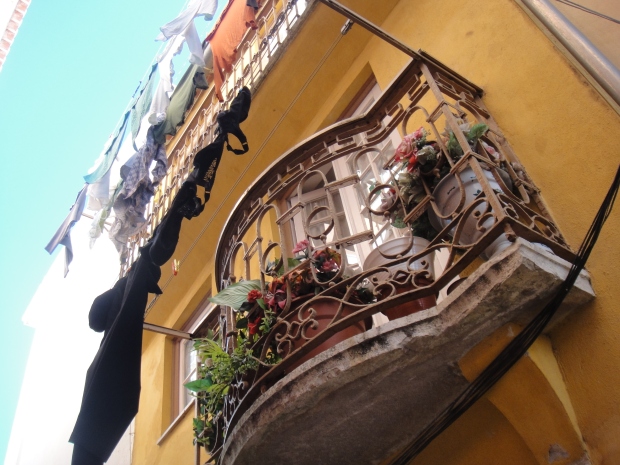 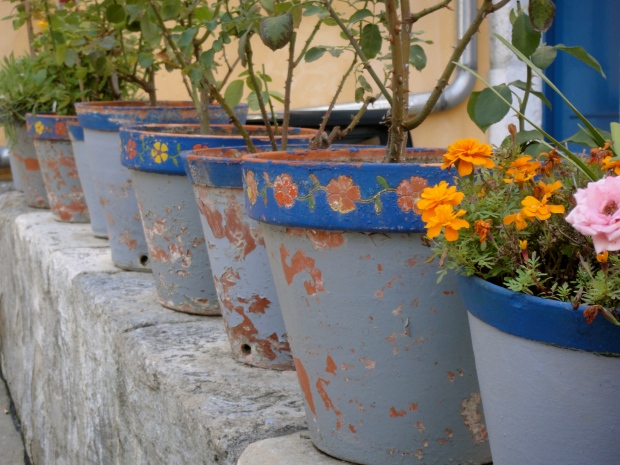 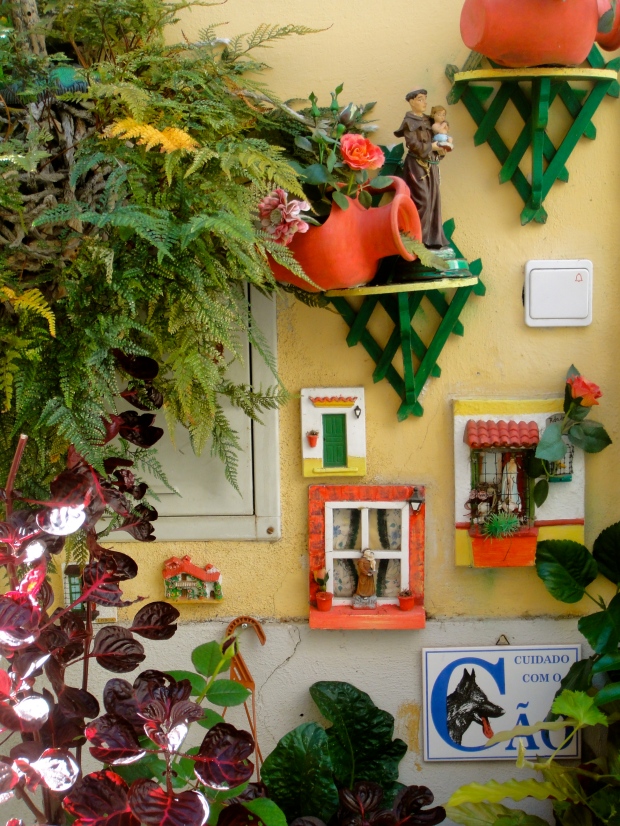 The Santa Cruz district may be small, but after lunch we managed to stumble into another cute cafe, where we indulged in the requisite coffee and a couple of pastel de natas. All this before we once again swayed along the cobbled streets and into the main complex of the castle. 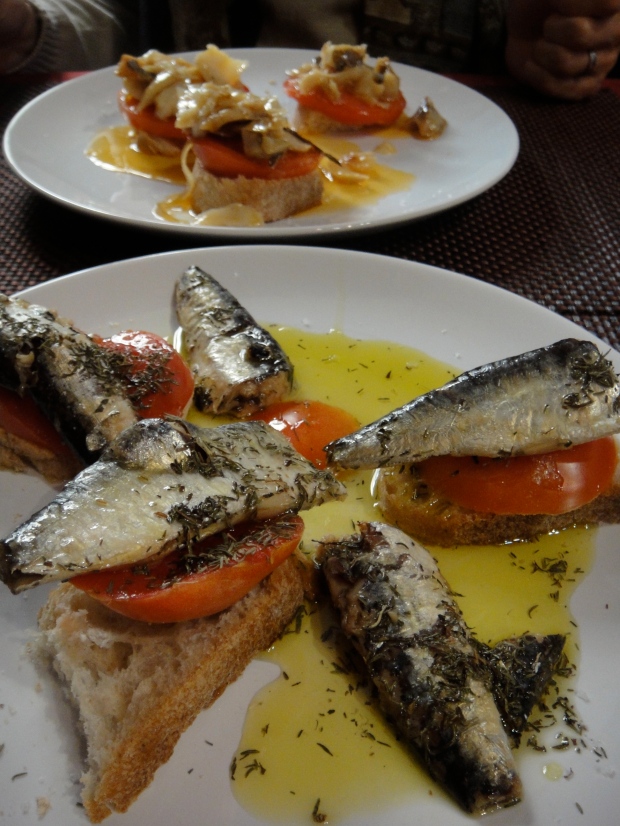 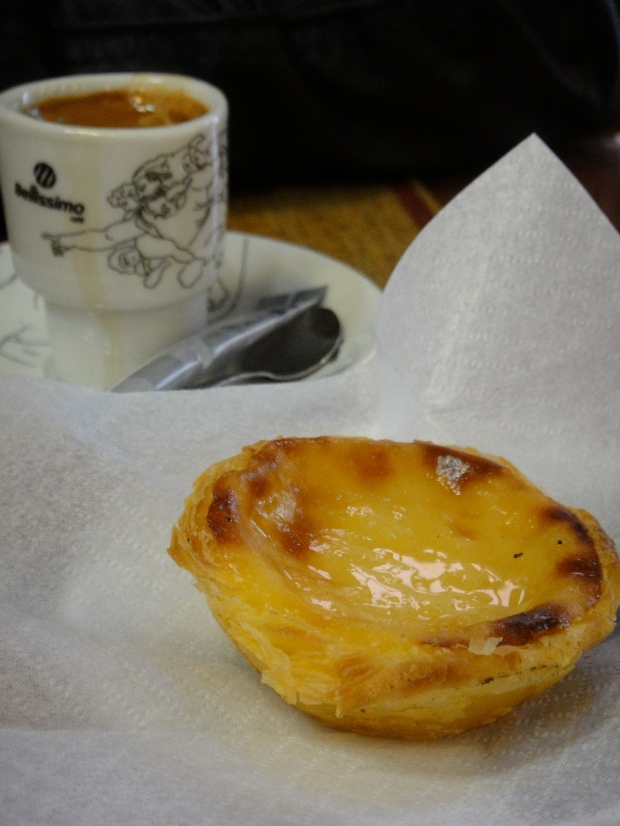 The Castelo de São Jorge emanates directly from the Moorish era, captured in 1147 by the Christian King Afonso Henriquez who transformed the complex into the residence of the Portuguese Kings. The castle did not go completely unscathed in the 1755 earthquake, and many of the ramparts remained in ruins until 1938 when Salazar began a complete renovation. Rebuilding the “medieval” walls and adding gardens and the peacocks who wander around today, the result is a castle which looks both ruined and well-kept – it is an example, I think, of what they called “controlled-clutter”. Old wells, fallen pillars, large weathered stones and rusting old canons surrounded by a bounty of plant life, all set within grounds whose outer terrace boasts incredible views over central Lisbon, the Baixa, Bairro Alto and out towards Belém. 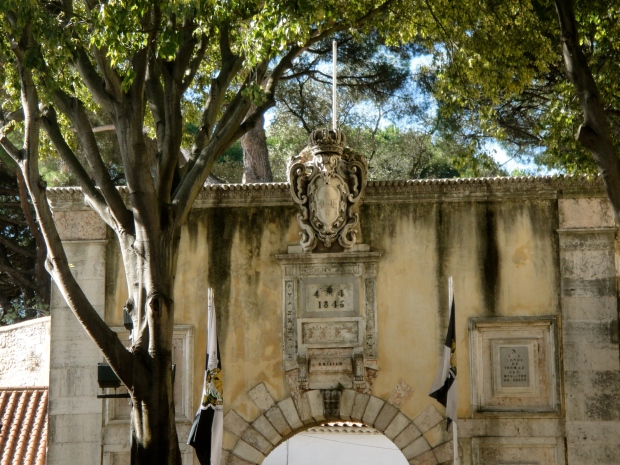 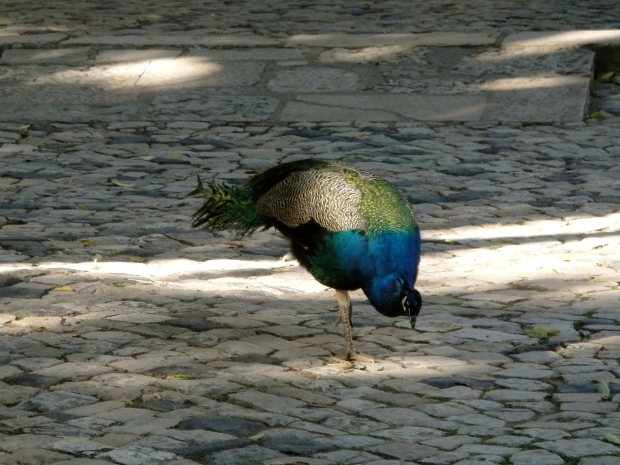 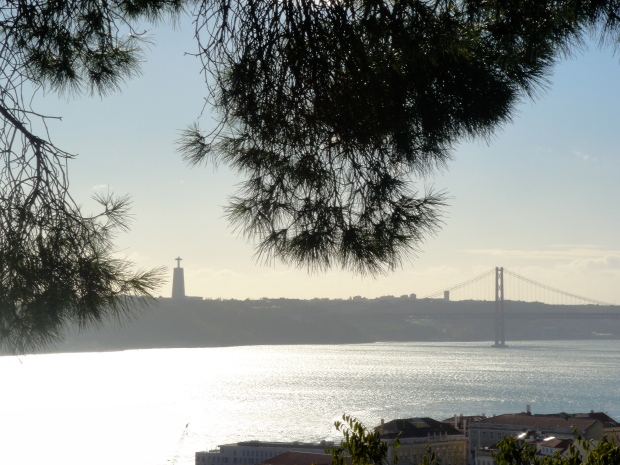 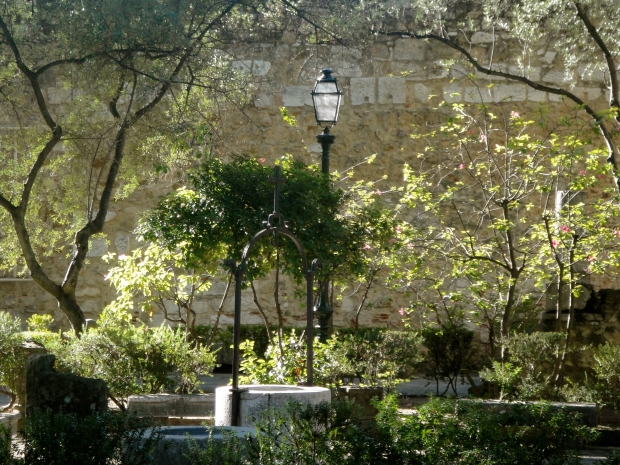 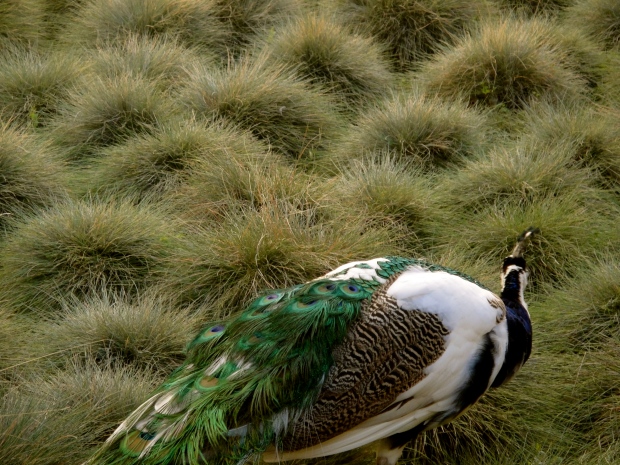 As the sun set over Lisbon and the skies gradually yellowed behind the silhouette of the 25 de Abril bridge, so too did our time in this great city start to draw to an end. Tomorrow we will leave, albeit after a further few hours of exploration. For now however it was time to leave the castle, whose ramparts were growing chilly in the increasing autumn winds and the fading peachy-hued sun, and attempt to make our way down the hill through the winding Moorish streets while we could still remember the way. 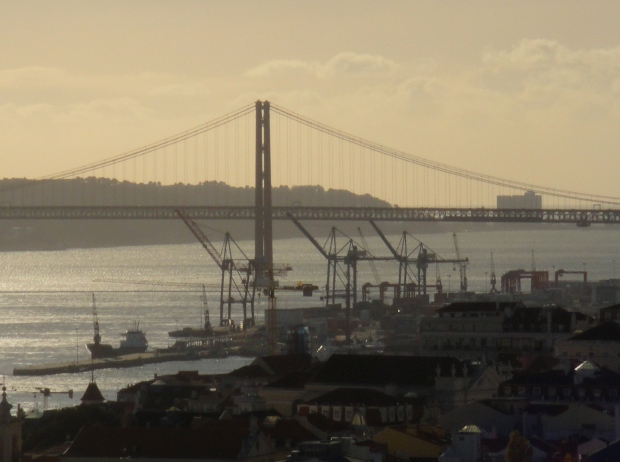 Back down in the Lx Boutique Hotel, we had a great dinner to prepare for – a tasting menu at the 100 Manieras, a restaurant whose exquisite cuisine deserves a post all of its own.