Valencia (i) – Day 1: Beauty and the Bell Tower

As I stood listening to the huge iron bell strike atop the Miguelete tower at 1pm, I was caused to reflect on where I had been just two weeks ago. Having climbed the 330-odd steps to the top of London’s Elizabeth Tower, to view the gigantic bell famous throughout the world as “Big Ben”, my ascendance up this latest bell tower marked my second climb up the steep spiralling steps of a campanile in as many weeks. Yet the differences in the visits were all too visible. In Elizabeth tower, the 330 steps were fairly gentle and wide; here the 207 steps were steep and arduous, narrowing as they got higher. In London, we were the only visitors on the stairs, whereas in the Miguelete tower high numbers of tourists meant crossing each other’s paths going up and down these narrow spirals was perilous to say the least. Up here, our ears only suffered one single bong, whereas up Big Ben at 12pm, 12 huge dongs reverberated around our bodies causing us near deafness and a strong case of jellylegs.

The city, viewed from above 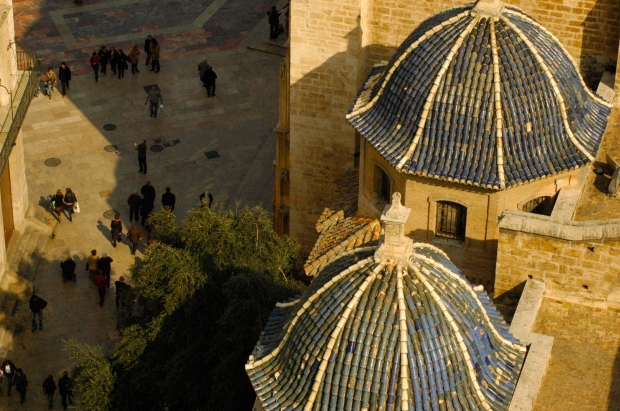 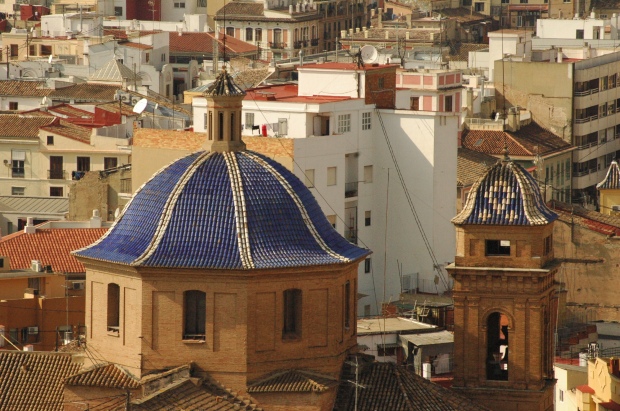 But the biggest differences between these two bell towers were twofold: First, temperature – in London I perished in freezing cold winds, desperate to get inside behind the relative shelter of the clock’s huge stained-glass faces; whereas atop the Miguelete tower, I was in a pleasant 20 degrees. Secondly, the view: From Big Ben the city of London spread out beneath my feet, famous landmarks were one to the dozen, but they were basked in cold and grey and ice; here, another city spread before me – golden browns and auburn hues toped with elegant ceramic tiled domes of blues and greys, eau de nil and white, while towards the sea beyond, the eccentric discordant architectural forms of Santiago Calatrava’s revolutionary arts and science park rose from the now empty basin of the old river Turia. So what was the city I was viewing from this bell tower with such felicitous awe and inspiration? None other than Valencia.

The City of Arts and Sciences in the distance

Valencia, capital of its own eponymously self-named region and located on the Eastern Mediterranean coast of the Iberian Peninsular, is Spain’s third largest city and one of the most visited in the country. Famous for Las Fallas, its March festival in which huge models are paraded down the city streets in a carnival of colour and festivity, as well as the rather oddly traditional mass human tomato fight (La Tomatina) which is held each August in the nearby town of Buñol, Valencia is a city with many facets, from its charming old centre, to its super modern Ciudad de las artes y las ciencias which boasts such startlingly innovative architecture as to have put Valencia on the architectural map of the world.

It seemed appropriate that having explored so much of my beloved Spain, I would eventually make it to this bustling Spanish centre, and all the more so at Valentines, a festival which shares so much of the city’s name. Romance wasn’t exactly my priority however – I was visiting with my Mother, with whom I have a shared love for Spanish culture – although it was certainly not lacking in the picturesque streets, charming street cafes, and large open squares of this iconic Spanish heartland. 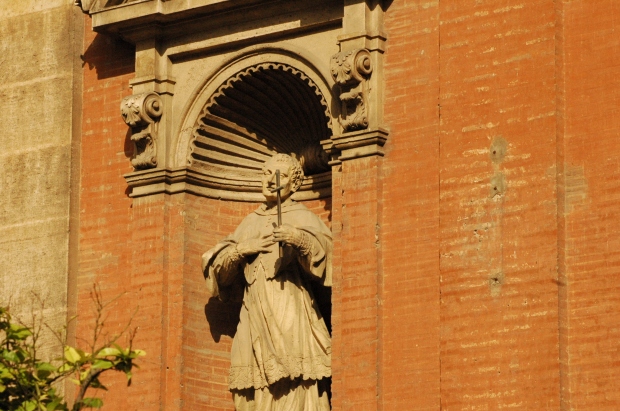 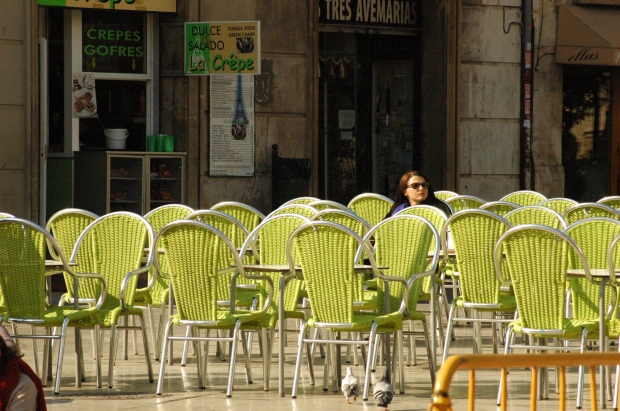 Staying in the heart of Valencia’s historic centre, in the conveniently located, wonderfully modernista Vincci Palace Hotel, we were only a short stroll away from the Plaza de la Virgen and next door, the Plaza de la Reina, in between which the city’s principle cathedral and it’s Miguelete bell tower mark the city’s centre-point. And what a place to begin what has surely followed as a love affair with this diverse and inviting city (although the steep spiralling stairs down from the tower did perhaps make sightseeing for the remainder of the day a little more tiresome). The cathedral’s tower is however only one aspect of this architecturally multi-faceted building. From austere gothic nave, to elaborate renaissance altar, and classical colonnaded rear to a front entrance dripping in baroque details, the cathedral is, to a degree, a perfect representation of this city. Not only is it situated at the beating heart of the city’s historical centre, but it demonstrates the plethora of influences and historical changes which have helped to shape and expand Valencia into the sprawling and diverse city it is today. 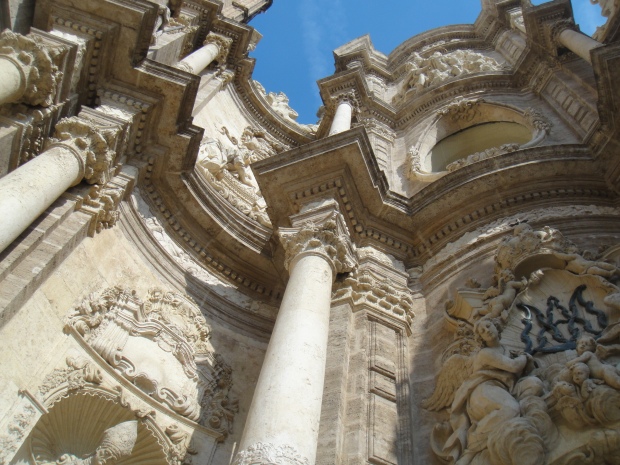 and its baroque facade

And a poor headless saint

So with a taste for the city’s multi-faceted personality, we spent our morning ambling contentedly from one square to another, down narrow little streets full of souvenir shops and cafes, photographing fountains and statues of (sometimes headless) saints and sinners, and noting the details of human gargoyles and colonnaded arches, heavily decorated churches and shady orange-tree lined courtyards which fill the old quarter.

After lunch, and having reached the northern extent of the old town, we crossed what was once the River Turia in pursuit of the city’s fine art collection. The old River Turia is perhaps one of the oddest elements of the city. Once a thriving great river which ran around the city’s historic centre like the caressing arm of a lover, the river caused such devastating floods in 1957 that the decision was taken to divert the river away from the city and out to the Mediterranean via a different course. The result is a strange ghost of what was once – still the river bed runs around the city, and still the bridges which once crossed water cross this large basin. However instead of water, along the old river bed runs extensive gardens for some 9km. The effect is to inject a huge swathe of greenery running through the heart of the city’s modern expanse, but it’s also an odd one – the base of bridges, normally plunging into water, plunge straight into concrete and flower beds instead – a ghost of what once was. 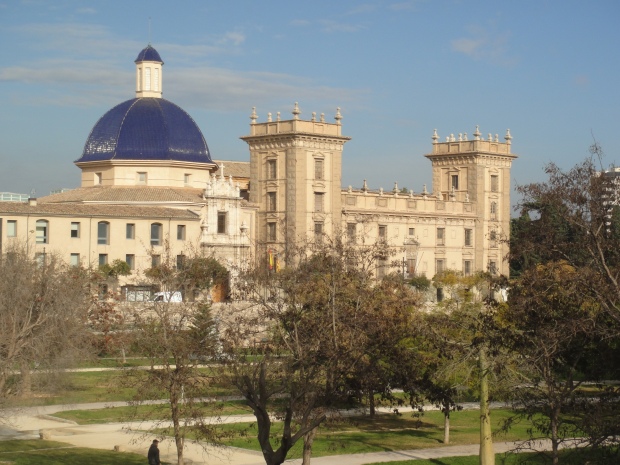 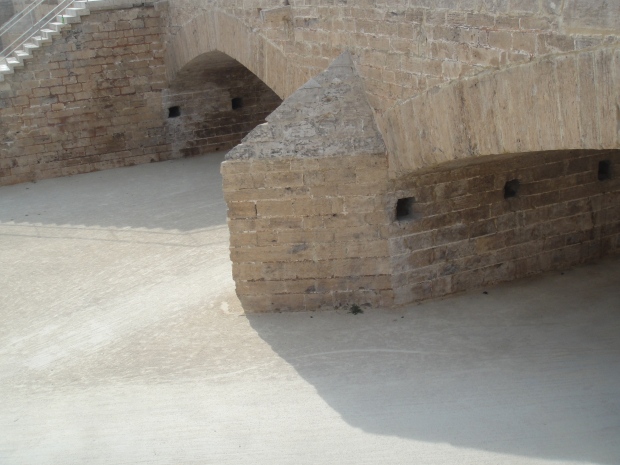 A bridge plunges into concrete on the old river

So crossing the ghost of the Turia, we arrived at the aptly named Museo de Bellas Artes. Said to have a collection second only in size to Madrid’s Prado (although I’m not sure how – the Reina Sofia in Madrid seems much bigger, although perhaps Valencia’s complete collection is not out on display) the museum is a cornucopia of paintings from Spain’s golden age of painting, including a self-portrait by Velazquez, several works by Goya, and an incredibly beautiful painting of Saint Sebastian by de Ribera (see below). The purity of his skin, pierced by arrows and tended to by the Saint Irene, against the beauty of his face, almost ecstatic with the extent of his martyrdom, made for an incredible painting to behold.

Also at the gallery are the works of leading Spanish exponent of the impressionist school, Joaquin Sorolla. Valencian born, and bequeathing his works to his home city on the condition that they would be collected together in a gallery such as this, the museum boasts a fine collection of mainly portraits which provide an evocative, very personal view of the city and its residents. Of particular attraction, for me, were his nudes and human studies, such as this academic study of a male, below. Also at the more modern end of the collection was this beautiful study of Cherries by Pons Amau, who perfectly captures the effect of sun shining through the leaves of this cherry tree. 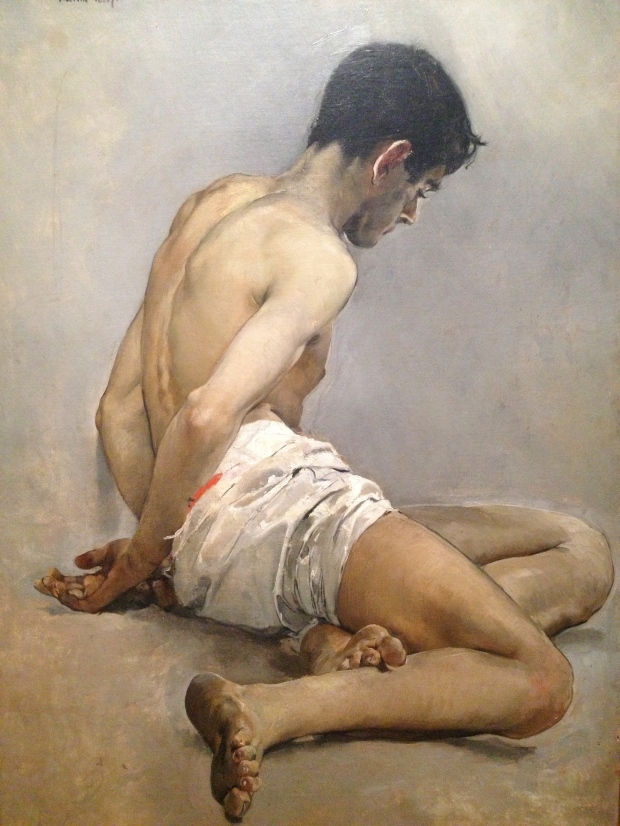 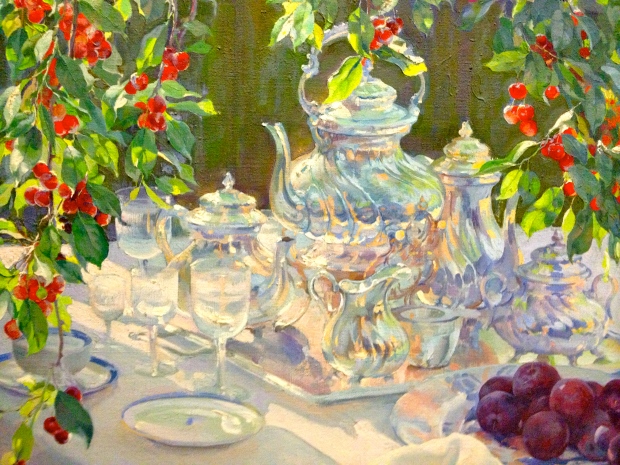 Oh and beyond the paintings, I should also mention the museum’s two palatial courtyards, one red and one blue, both bursting with busts and relics from antiquity, the perfect places of calm to explore towards the end of our first Valencian day.

Other highlights from the Museo Bellas Artes

So from the 207 steps of the Miguelete bell tower, across the historic quarter of Valencia, over the old Turia river and around the Belles Artes museum, our first day in Valencia presented a complex opening in this urban tale, a tale in which we were presented with the undeniable beauty of Valencia’s belles arts, as well as the clamouring melodies of its bells, ringing out in recognition that the central heart of this vast city bursts full of vigour for all to see, hear and explore. And that’s just what we intend to do tomorrow.