It was inevitable that after 3 glorious days of winter sunshine, in which it felt as though we were cheating the seasons and soaring towards a Spring renaissance, Valencia’s skies would darken, the temperatures would drop, and rain would fill the previous blues of the city’s skyline. Unfortunate though this was, it was our day of departure, and having spent a good few hours languishing in our modernista hotel suite, prolonging our stay through a deliberate slow pace of packing, the skies and dried up somewhat by the time we hit the streets again. It was grey, but dry, thus causing no impediment on our final day of sightseeing.

A what a feast of sights we had left till last to see. Largely because of widespread Monday closures, a number of Valencia’s architectural gems had been left for the last day of our visit, gems which sit at either extreme of the city’s historical architectural profile, from the brilliantly inventive, UNESCO protected gothic architecture of La Lonja, to the ridiculously extravagant, utterly unrestrained baroque of the Palacio del Marqués de dos Aquas.

First up, La Lonja de Mercaderes, a gothic chamber of commerce which is one of Valencia’s earliest surviving buildings, and now protected as a treasure of its architectural heritage. The large building was constructed in the early 16th century and was at once a commodity exchange, elementary bank and meeting place for the merchant classes. Many of those meetings would have taken place in the vast Sala de Contratacion, the huge main colonnaded hall which is the unrivaled icon of the historic quarter. 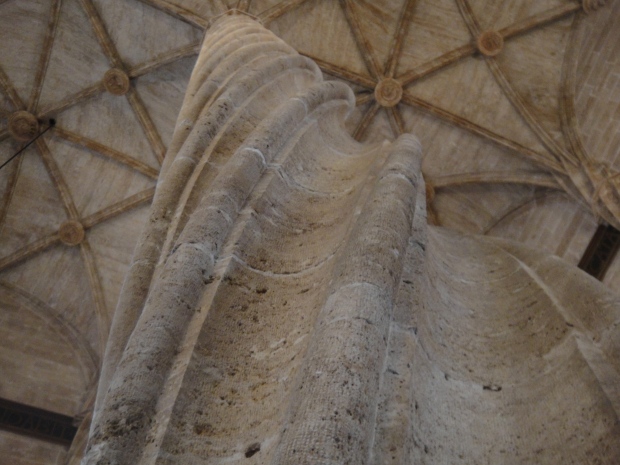 With its soaring, slim, twisted pillars, curling high like sticks of barley sugar or ropes dangling from the heavens, and the rib-valuted ceiling which those multiple pillars aptly support, the hall is an awe-inspiring site. Little wonder then that this hall is said to have inspired Santiago Calatrava, the home-grown architect of the iconic Ciudad de los artes y ciencias, an inspiration which appears to have manifested itself in the super fine feather-like concrete and steel arches of L’Umbracle and the whale-like rib structure of the Museo de las Ciencias Principe Felipe. Meanwhile, beyond the hall, a small but perfectly formed courtyard makes clear reference to Spain’s Moorish heritage, while up some gorgeously twisting gothic stairs, the Consulado del Mar boasts a similarly elaborate, but more contemporarily gothic wooden ceiling. 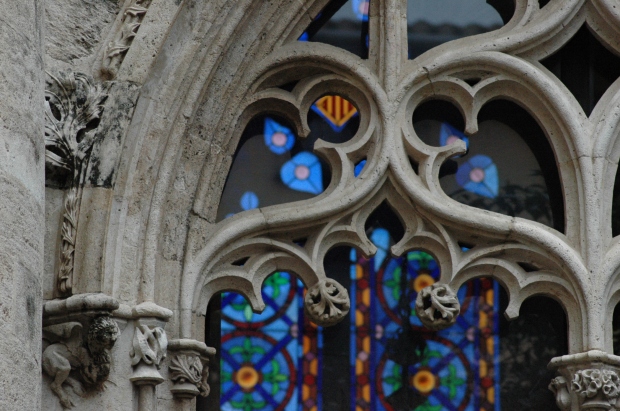 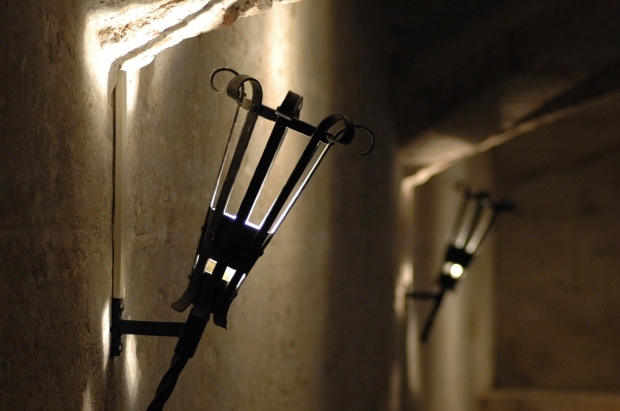 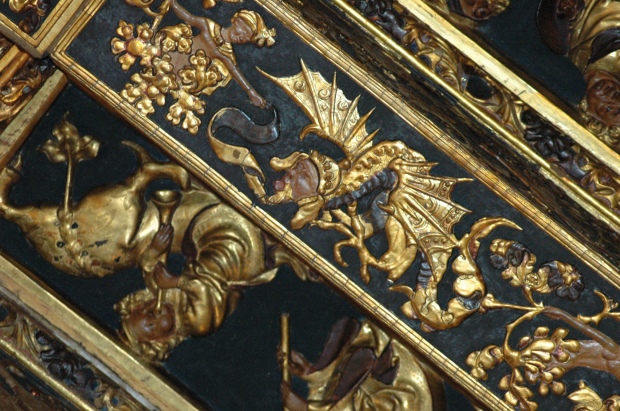 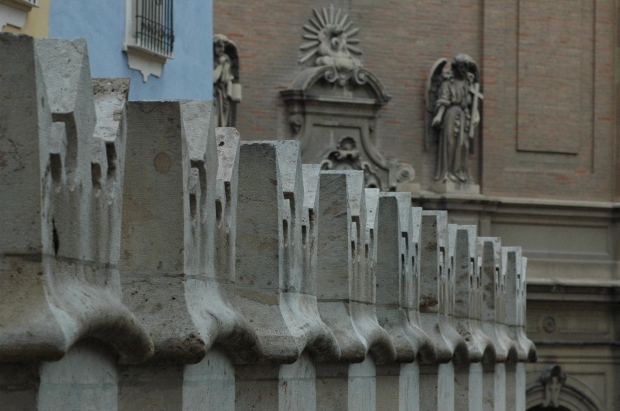 Asides from the inside of La Lonja, we were utterly captivated by the extent of pictorial illustration told through elaborate gothic carvings, gargoyles and other architectural decoration. Just take a look at these few examples of the some of the rich stonemasonry on show. 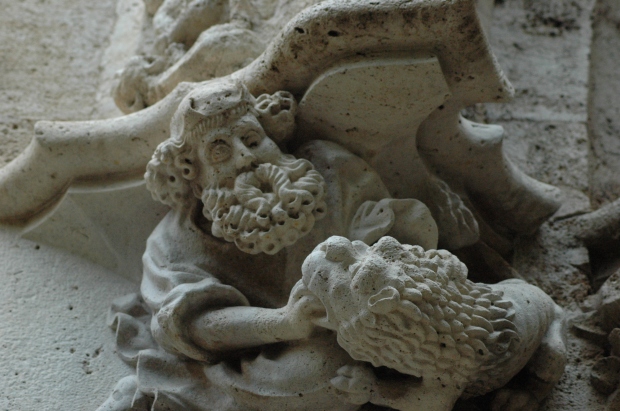 Leaving La Lonja and the fragrant scent of its courtyard-filled orange blossom behind, we headed just around the corner to another of Valencia’s architectural icons: the Mercado Central. Built in the very different Modernista style, the building plays host to Europe’s largest fresh produce market. Like a city within a city, the market is a fascinating labyrinth of scintillating smells and visual spectacles, from huge piles of oranges, stacks of spices and a panoply of fresh fish, to row upon row of iberico hams hung alongside fresh chorizo sausage and huge manchego cheeses. Enamored as much by the food as by the elegant modernista design, I took full advantage of the array of produce around us, taking the opportunity to stock up on a supply of pimenton and saffron which I use with abundance in so much of my Spanish-based cooking at home. 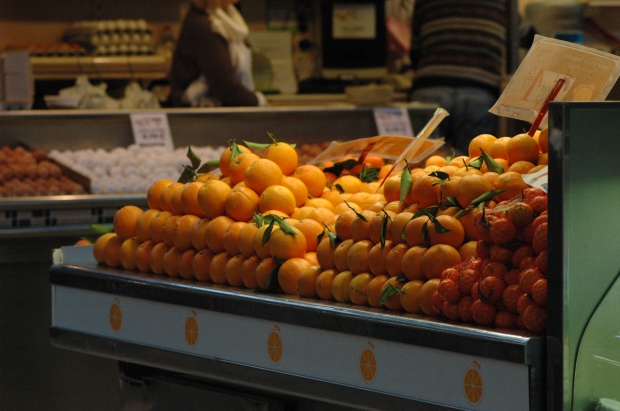 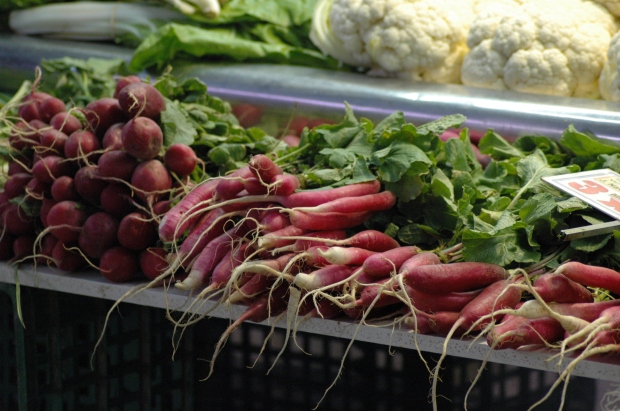 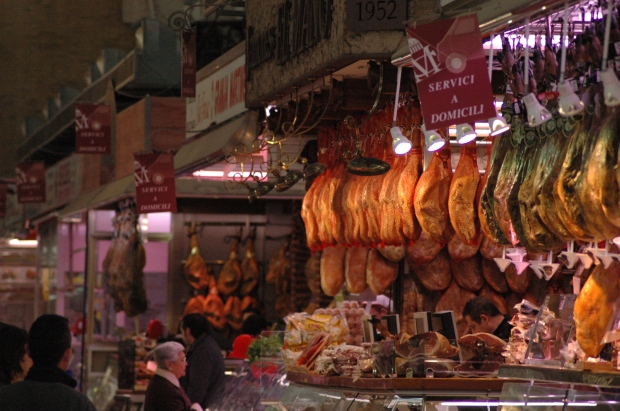 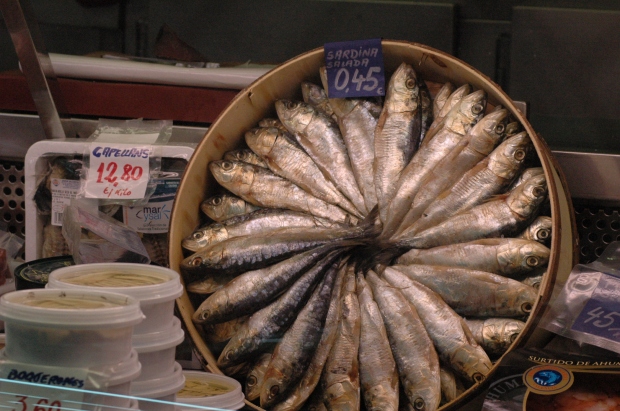 One final stop before a long lunch where we would end up languishing the remainder of the day before our departure home to the UK. Leaving perhaps the most architecturally splendid of Valencia’s historical buildings till last, we headed south of the central cathedral quarter, where our next destination made for a simply unmissable spectacle in the fashionable Calle del Poeta Querol. With its completely over-the-top sumptuous stucco imitation-marble facade, windows literally dripping in the most unrestrained elaborate sculpture and a doorway guarded by a pair of flamboyantly muscled alabaster caryatids, the rococo Palacio del Marques de Dos Aguas makes even Barcelona’s Gaudi houses appear conservative.

We weren’t overly sure what the palace was, or how it had come to be decorated in such a lavish display of extravagant eccentricity, other than it was the family home of the Marquis de Dos Aguas who clearly used the exterior of his house to show off the extraordinary extent of his wealth and artistic sensibilities. But the wealth on show externally was perhaps outdone, astonishingly, by the palace’s interiors, so exceptionally richly decorated that this was like a mini-Versailles, unsparing in every detail of its luxury and opulence. Asides from the grandeur on show, the palace also houses a large ceramics collection, paying homage to the great ceramic tradition in the Valencian region. While interesting, the pieces on show were certainly outdone by the incredible surroundings of the palace, and more often than not I found my eyes wondering to the incredible array of excesses all around rather than rest on the ceramics, from Roman to Picasso, which were on offer for our interest.

Our day ended as all days should – a long indulgent luncheon (which deserves a post all of its own) and a quick perusal of the shopping district on the Calle de Colon. Just as we headed back down into the tube, suitcases and a little shopping in hand, the rain we had thus far dodged started to fall again. Like everything with this Valencia trip, the details all fell into place. The weather was merciful and the city completely inviting. The sights were various, the art plentiful, the old town scenic and the modern alternative a breathtaking diversion. Valencia is now ticked off my list of Spanish must-sees, and if I was tracking my progress down that list with a series of pins of a large map of Spain, I’d place a huge golden star where the pin sticks in Valencia, for a destination worthy of plaudits a plenty, and most certainly a return visit, muy pronto.