Marbella in May: a photography experiment (i) – my patio garden

For me, a travel camera needs to be three things. It needs to be small enough that it can be hidden away in my pocket, ensuring that I exhibit none of the tell-tale signs of being a tourist that a camera strung around the neck shouts out like no other. It must have a good zoom – sometimes the best photos are details seen from a distance so that you can benefit from “framing” the detail with some far off backdrop. Finally it must be capable of exceptional close-ups, as nothing thrills me more than an almost microscopic photo of an insect or flower, exhibiting more exciting detail than can easily been seen through the naked eye.

So when my small pocket camera decided to take early retirement, a tough research trail ensued as I set about trying to find a camera with the triumvirate capabilities I demanded.

Eventually I settled on the Sony Cybershot DSC-HX20V. It’s not exactly pretty to look out, but what it promises to do ticks all of the boxes. For a pocket camera it has an incredibly large 20x optical zoom with a further 20x digital zoom capability. It’s easily pocket size although a little bulkier than my former model (which admittedly only had a 5x zoom). And the real winner is its ability to take incredible micro shots from only 1cm away from the subject (see the lizard below!)

Sold, I bought the camera for a snitch at £229 (from John Lewis) and took it with me, the very next day, when I headed to my second home of Marbella in southern Spain. Notorious for its vivid blue skies, beautiful sea views, consecutive days of sunshine (allegedly) and an old town which is truly a gem of Andalucia, what better place to experiment with my new camera? 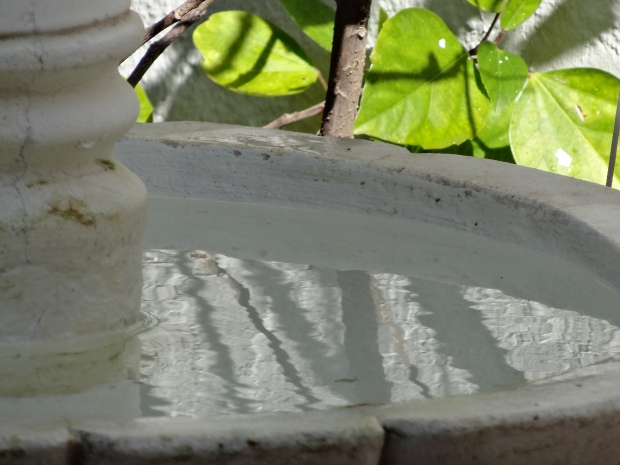 What follows are a series of posts which share my first photos using my new camera. I’m so pleased with the results. The details captured at the end of the 20x zoom are really impressive, as are the microshots at the other end of the spectrum.

Up first are photos of my family’s little patio garden out in Marbella. A small plot behind our cosy little old house, it’s a very petite but pleasing garden – our own small slice of paradise.

While it looks at its best in the summer, even at this time of year it’s flourishing, as milky white lilies poke up between a large-leafed bird of paradise, the jasmine springs back to life and brightly coloured hibiscus and bourganvilla inject the garden with a panoply of colour.