Provence Odyssey | Les Baux: Day 7 – The Belle of the Alpilles

Le Beau – Les Baux: the insurmountable beauty that is Les Baux, a tiny medieval village sitting upon a rocky spur of the Alpilles mountains, and today one of the most visited sites in France. And little wonder, for what this village lacks in size, it more than makes up for in the stunning natural beauty of its surroundings, the almost untouched historical charm of its tiny steep streets, and the incredibly variety and brilliance of its attractions. Yes, Les Baux-de-Provence, only some 10 minutes drive south of Saint-Rémy up various meandering gradually steepening mountain roads receives some 2 million visitors a year for a reason, and given our proximity , staying as we were in Saint-Rémy, there was no way we were going to miss out on this gem in the crown of our great Provence Odyssey.

So as day 7 of our trip broke, we hopped into a cab, and made the short journey into the Alpilles mountain range, our eyes gradually widening as the utterly stunning dramatic fortress site came into view – the craggy almost unrecognisable remains of an old castle sat upon a high limestone spur looking like something straight out of a fairytale. Once dropped off in the town and having arranged for the taxi to return some 5 hours later, we set off hungry for this dynamic little town, eagerly exploring its few steep and shop-lined streets, our cameras clicking in harmony as we climbed, not knowing which way to turn at every corner in this labyrinth of unending charm, but finding seductive medieval beauty on every street we took. Our little perambulation inevitably led us towards the top of the rocky spur upon which the village precariously sits, and there through a large ancient gateway, we entered the first of this town’s three excellent attractions – the old ruined Chateau.

The Chateau of Les Baux 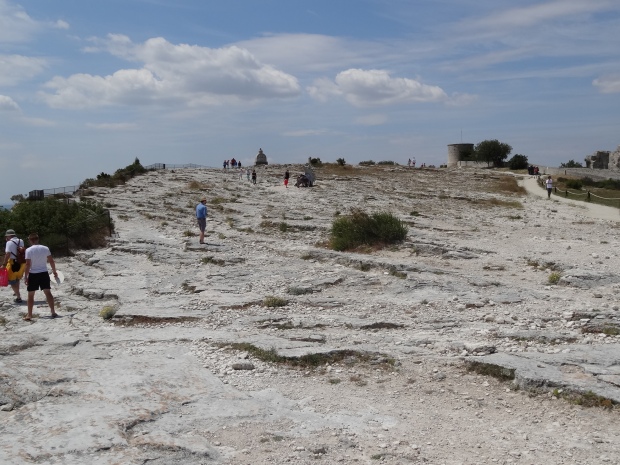 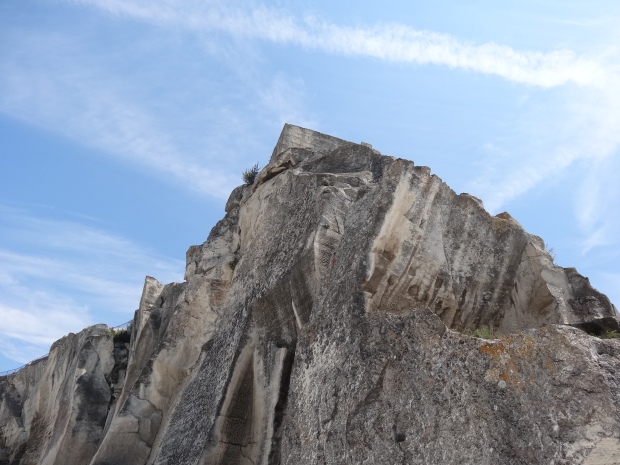 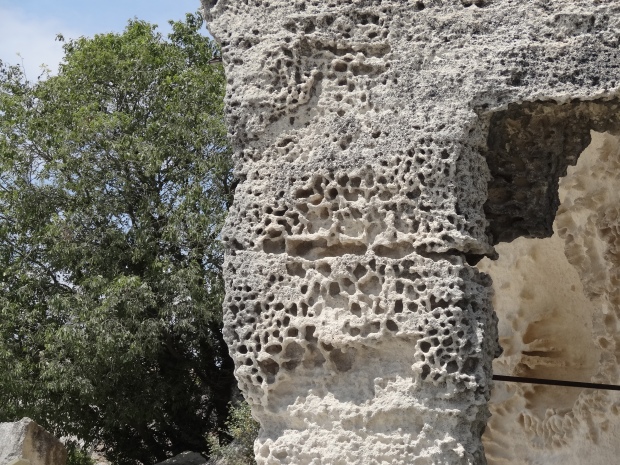 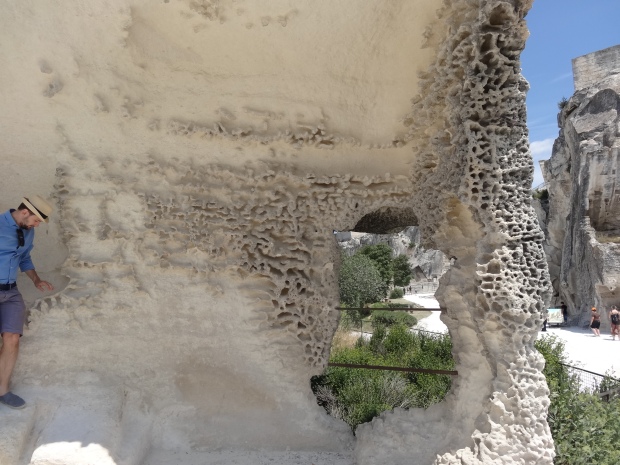 I’m not sure how to describe these visually spectacular ruins, other than to say that they seemed to me a hybrid of half building and half rock, as though the castle had literally been forged out of the craggy limestone rocks of the Les Baux spur, so that misshapen windows and steep perilous staircases began to morph out of the relentlessly hostile limestone, complex in all its greys and ocres overrun with oxygenised dribbles that resembled treacle poured over honeycomb ice cream. Whatever the castle was, today it was far less – a mere shadow of its former glory, yet still retaining the stronghold position of its mighty elevation above surrounding Provence, from whose ruined battlements the views of the encircling patchwork tapestry of wheat fields and olive trees and cypresses and vines were just stunning – I almost teared up at the site of it, although to be fair, the brisk wind at this high altitude probably didn’t help in that respect. 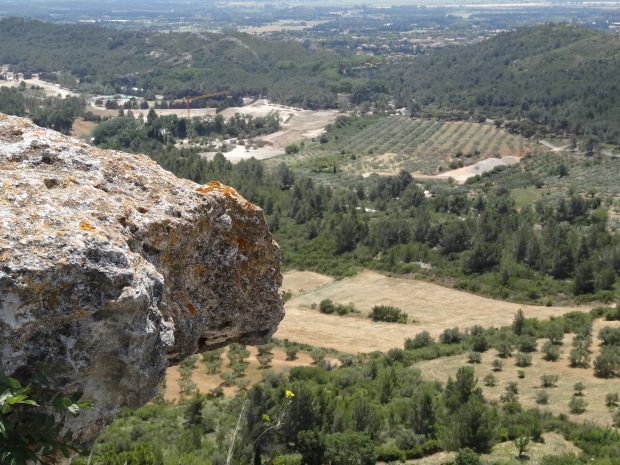 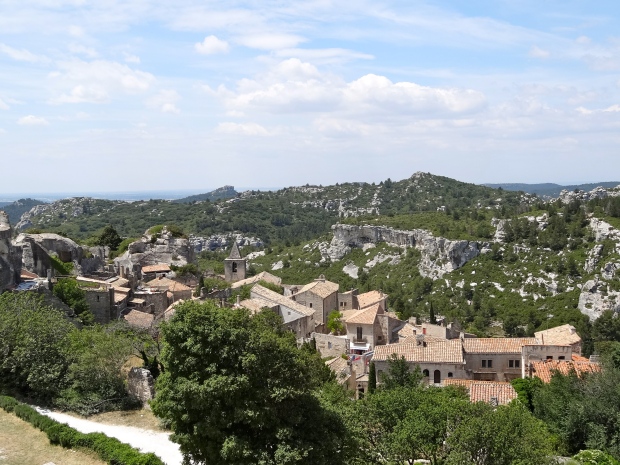 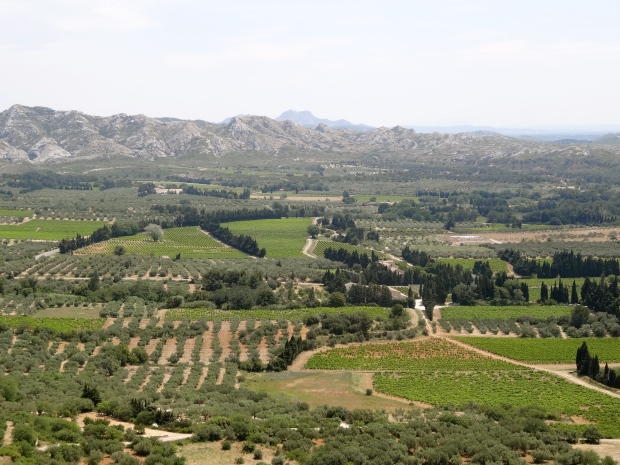 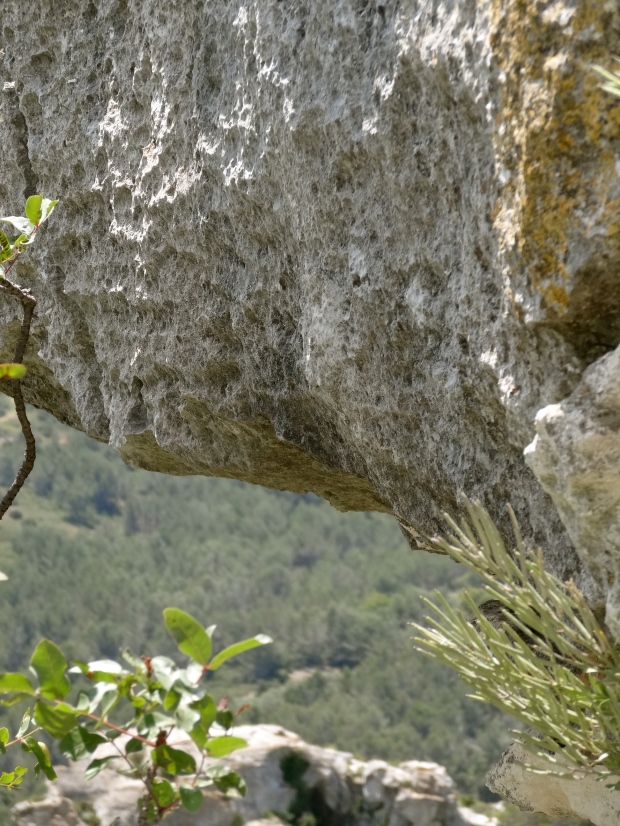 We toured this vast remains for as long as our legs could carry us over the treacherous terrain, largely ignoring the historical facts given to us by an accompanying audio guide in preference for the unique brilliance of the vistas all around. Thoroughly satisfied with the almost incredible sight of these views, we headed back into the cute village streets, whose many terracotta roofs had been seen at such a pretty vantage from the ruined Chateau, but which now provided us with a delicious luncheon, again accompanied by that same jaw-dropping view. 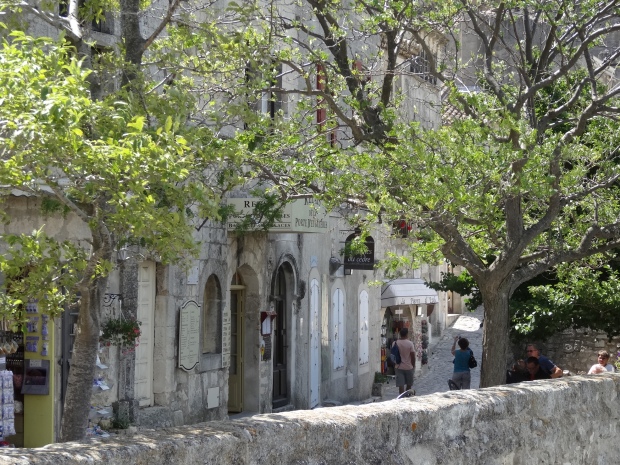 With time ticking onwards, and that taxi, we now realised, returning sooner than we would have liked, we proceeded swiftly to the second of the village’s abundant attractions – the Musée Yves Brayer. This eponymously named gallery is the home of many great works by this fantastic Les-Baux based artist, whose landscapes of the surrounding countryside and Les Baux itself bare suitable testament to the stunning location will cannot help but inspire (see my next post-tomorrow), but also included paintings of many of the great cities which have inspired artists, and me, in equal measure across Italy and Spain, including, to my great delight, my beloved Marbella. However, beyond Brayer himself, our visit was well timed, coinciding with Marseille’s European Capital of Culture status for 2013, and here an exhibition held as part of that festival, showing the influence of the French Mediterranean in popular 20th century art, and including some greats including Signac, Dufy and Buffet.

But for the real big art names, and images of their works magnified to a scale quite beyond the imagination, one only has to go to the last of our Les Baux destinations, an attraction so beyond all previous of my life’s experiences that I now struggle in words to describe this immersive, mesmeric, mammoth celebration of art in the most unique of surroundings. I am talking about the Carrières de Lumières – an attraction literally of totally-immersive light and art set within the incredible other-wordly surrounds of Les Baux’s former limestone quarries. These quarries, otherwise known as the Val d’Enfer (valley of hell) and having inspired countless artists and writers in their time including, allegedly, Dante himself, as well as a film by Cocteau, are like vast almost unending cathedrals of stone cut deep into the mountain side.

Within these quarries, the Les Baux authorities have realised the most stunning of all attractions, by projecting huge images of some of France’s greatest artworks onto the walls and the floors of this vast space accompanied by stirring classical music. When you walk in, through a dark curtain, and suddenly find yourself literally surrounded by light, by art, and by music, every sense is awoken by this extraordinary audio-visual experience. Monet, Chagall, Matisse, Renoir – all were there, but seen in a totally new light, their vast scale bringing art to life, and the music echoing around the limestone masses creating immersive theatre which couldn’t help but pull you into its emotional swathe. 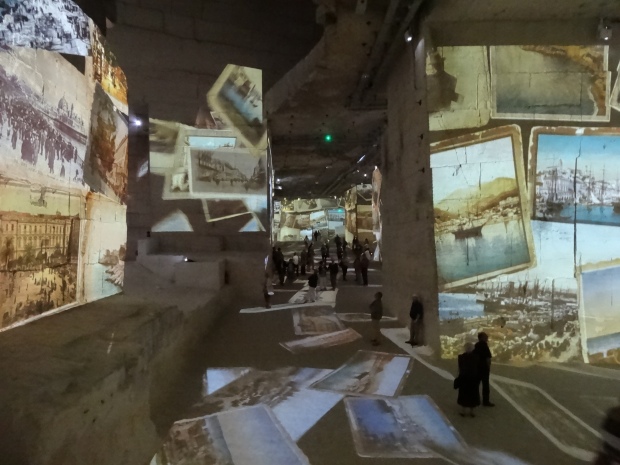 It was an incredible experience, and one which, along with the beautiful village of Les Baux, will stay with me for many years to come. What a stunning artistic centre; a tiny medieval village, seeped in the past, but now exploring new routes of artistic discovery in ways that only the French do well. Bravo!