The Daily Norm’s Photo of the Week – Morning Sunrise II

At the risk of sounding, and looking repetitive, I could not help but elect that The Daily Norm’s Photo of the Week  be another stunning sunrise for the second successive week. For while the UK, and now much of Northern Europe has been battered by a much publicised raging hurricane of late, the weather has also provided some rare glimpses of undeniable glory, as this week’s sunrise shot will show.

Soft puffs of raspberry ripple candyfloss cushions are punctuated by the dramatic linear columns left in the trail of early morning planes plummeting through the airspace, while soft mauves and duck-egg blues at the periphery turn progressively more and more orange and vibrant as the sun rises closer to the horizon. This was truly a stunning sunrise, and one which I love so much that I’ve included not one, but four images of its progression, including one rather atmospheric closeup of a nearby roof top, the lead tiles glinting in the soothing light of the sky, and an urban skyline forming a romantic fortress-like accompaniment in the background. 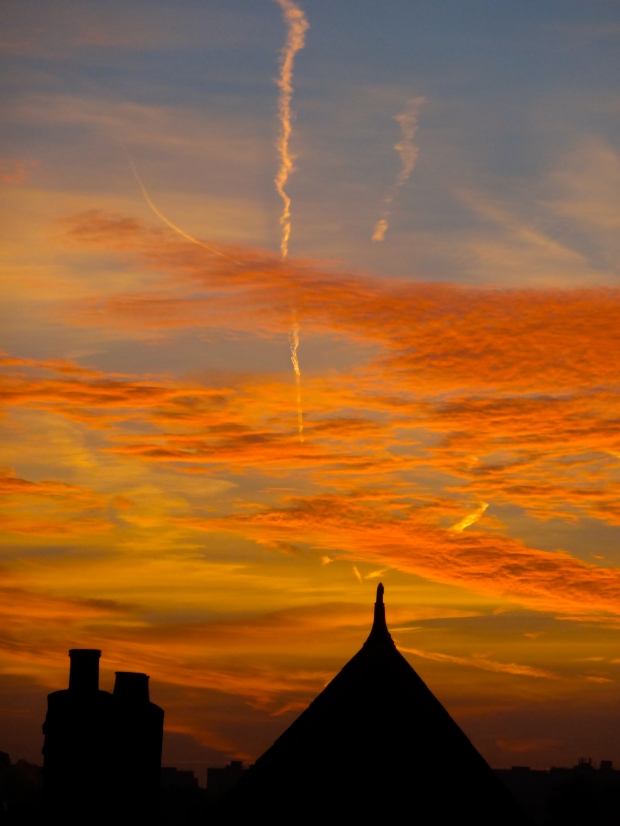 The hurricane which hit our shores may have been the worst in 26 years – but as these sunrise shots show, the calm before the storm was certainly a bloomin’ good one too.

© Nicholas de Lacy-Brown and The Daily Norm, 2001-2013. Unauthorized use and/or duplication of the material, whether written work, photography or artwork, included within The Daily Norm without express and written permission from The Daily Norm’s author and/or owner is strictly prohibited.