The Daily Norm’s Christmas Tree of the Week | No.4: Traditional Glamour

It’s appropriate, I think, that the last of my four Christmas trees to be featured on The Daily Norm should be the most traditional and glamourous of the lot. For in these final days before the great day of Christmas itself, what better way is there to reflect on the abundant design bounty of the season than to revel in decorations which are, in their traditional character, a real nod to the lavish spectacle which sits at the centre of this season of plenty.

Yes, my final tree is the tallest of the lot – at just over 7 ft it almost touches the ceiling of my modern flat, and leaves no space for a fairy to sit atop. But asides from this notable absence, the tree is in every way a homage to the traditional colours and exuberance of Christmas, while retaining a sleek and at times eccentric twist. The design of this tree is very much dictated by its location. Set within my hallway, it has to be narrow enough that it does not become un-passable in the fairly tight space of my hall. But it also has to be big enough and abundant enough that it impresses upon a guest’s arrival – after all, it is the first sight which will grace visitors to my home in this merry season. 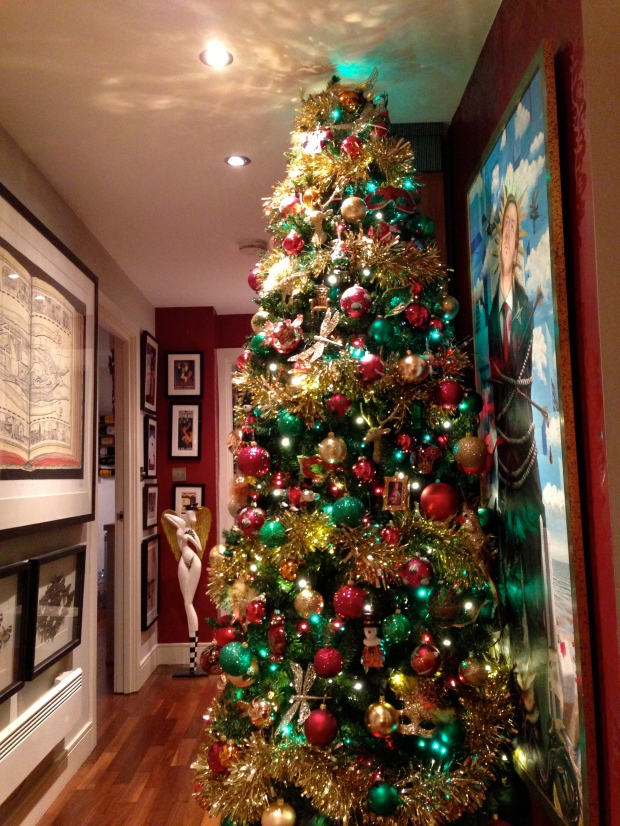 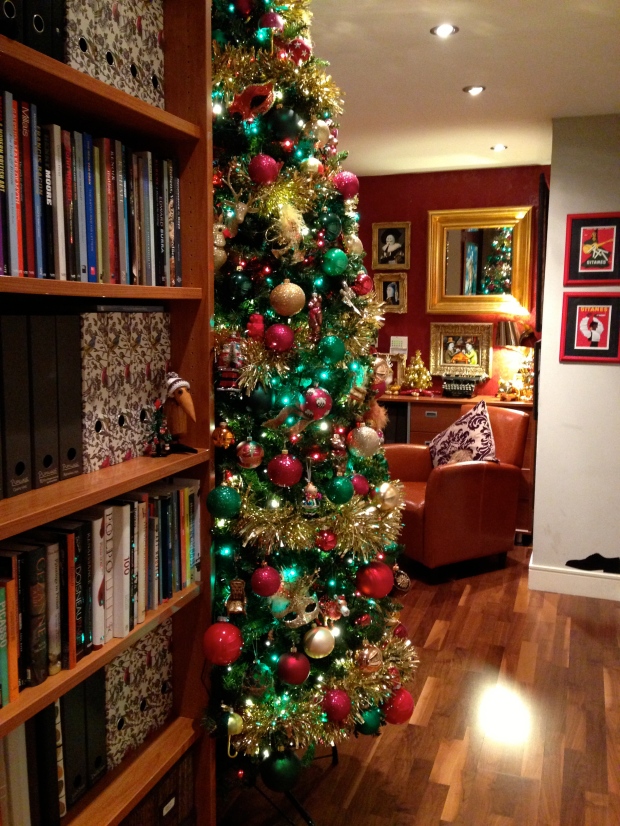 Meanwhile, the design of my hall also leans towards the traditional, with its broad book shelves, floor to ceiling art work and framed old adverts, and various paraphernalia which would suit the most traditional of studies – an antique typewriter, a leather arm chair, a barrister’s wig and so on. So in attempting to fill my space with Christmas cheer which fits seamlessly within the scheme of my hallway, I have not only gone for the traditional Christmas colours of red, green and gold (which also feature in the surrounding artwork); I have also matched up the library theme with the addition of some very quirky little decorations such as gold stags heads, armchairs and even this year’s magnificent addition – baubles shaped to look like a framed Da Vinci (thanks Liberty’s!). These slightly more unusual features are then filled in with plain sparkly baubles in shades of rich forest green and perfect berry red, while the whole tree comes alive with glittering gold baubles and tinsel.

Despite being a tall narrow tree, this vertical pillar of festive abundance is probably my favourite of the lot, because in being almost overloaded with bauble after bauble of glittering glass spectacle, it is as over the top, as plentiful and as generous as the season it is dressed up to celebrate. Happy Christmas everybody!