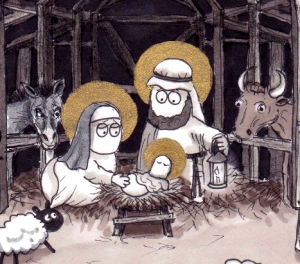 And so it was in a little dirty stable on the outskirts of the small town of Bethlehem that Mary Norm gave birth to a baby Norm called Jesus Norm. And at that moment all of the heavens broke forth into song; the stars across the globe grew brighter, and one dazzling star in particular guided the most eminent of guests to pay homage to this new King of all Norms, including, in particular, the Three Wise Norms from afar. And so upon this first Christmas Day, which Norms all around the world now celebrate, this little dazzling baby-Norm was placed in a cosy hay-filled manger, while before him the local Shepherd Norms and their little sheep looked on, awestruck by the glory of the occasion; besides him Nancy the Donkey and a charming Ox called Oliver provided comfort and warmth; his daddy Joseph Norm gazed upon him full of pride; and the Three Wise Norms brought forth their gifts of Gold, Frankincense and Myrrh. Hallelujah! Jesus Norm is Born!

So that is the end of our story; a Norm Nativity told through pen on paper with lavish layers of gold paint. What was to come of Jesus Norm you may well ask? Well, we’ll leave the answer to that question, perhaps, for another time.

Until then… a Very Merry Christmas to you all, from me, and from the Norms everywhere.